From the PDI archive - the emergence of screening for orchids

“The beauty of the system was that it required little maintenance”

In the 1970s, one did not yet see any screen installations with orchids, but as soon as new greenhouses were built in the 1980s, it might be possible that a screen from Peter Dekker Installations would be installed in the greenhouse. “A number of cymbidium growers at a certain time had a PDI screen,” a former grower from Pijnacker remembers.

A call with Jeroen de Jonge from PDI recently brought back some great memories, and although the grower "never liked having his name mentioned in a trade magazine," going back in time posed "no problem."

In 1965, the grower, who retired as a grower 15 years ago, started growing cymbidiums, the most popular orchid species at the time to grow in Dutch greenhouses. "Later that became phalaenopsis and the nurseries have grown bigger and bigger." After moving in the late eighties, a whole new nursery was built for the grower in Pijnacker. "And for the first time that included a screen." 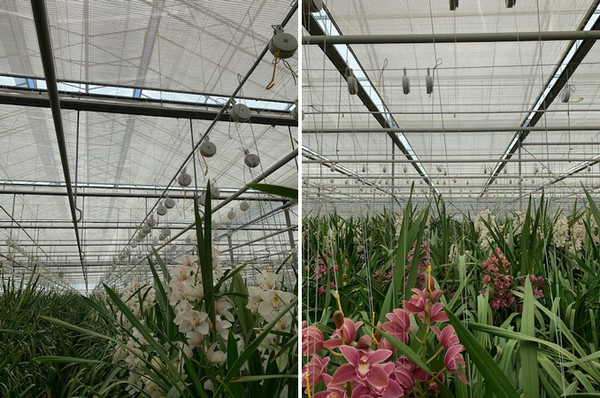 Cymbidium cultivation in 2020, with screening

A little more expensive at most
Over the years, the greenhouse was extended a few more times, so that eventually 2.5 hectares of greenhouse were full of cymbidiums. “Back then I hired a consultant for the construction and they advised me to use PDI, among others. Those were just good screens, at most you could remark that they were a bit more expensive than the competition.”

Preferably just a wire
But then it meant that you were having a well-running installation. "The system was different than that of others," the former grower still remembers. “Most systems worked with toothed tracks, whereby, if something went wrong, the whole thing would slide together, resulting in a lot of damage. With the PDI system, which worked as I always understood - I'm just a grower - with wires on a coil, at most occasionally a steel wire broke. The damage was therefore much less.”

At your door at 6 AM
Anyone who grows cymbidiums for years, will sometimes run into problems, even with a very good installation... “Yes, surely, also at my place they were knocking at my door at six in the morning when there was a malfunction somewhere. Then they were on their way to a big job and just popped by. Or they would come in-between or by late afternoon on the way back from a job. The problem was always solved within 24 hours.”

Growers together
What the former grower also remembers well are the special promotions PDI had. “Special orchid evenings, for example, to catch up with colleagues and installers about developments with a snack and a drink. Or anniversary parties and of course the famous Christmas bread.

"I didn't know the new generation that well, but I got along fine with the old Peter Dekker, Piet Rensen and Kees Verkade. The latter, a former grower himself, frequently visited growers to hear how things were going. Growers among themselves always know first where there would be construction or renovation going on, so that way we exchanged information.”

Screen on the roof
At a certain point PDI, which grew along as it were with the orchid cultivation, also started to apply screening on top of the greenhouse roof. This to do away with chalking and to keep the heat out. “You always had heat between screen and glass, but for me that system, which also required a considerable investment, was not necessary, because I had no flowers on the branches in summer. I always started in August and in May the last branches with 10, 12 or 14 flowers left the greenhouse.”

Sold
When Pijnacker started to grow and more houses were needed, the grower sold the lot. At a certain point this also meant the end of the annual, one meter long Christmas bread for which PDI was also well known. “I recently talked jokingly with Jeroen that I would like to have the same bread again, haha. Although I can also buy it myself, of course, but then they are certainly not that delicious.”

This was the second part in a series of archive stories. In part 1 Jan Vellekoop and Piet Rensen told their story about the time 'of climbing and scrambling'.

PDI hopes to find even more old photos this year, so stay tuned.