Record number of illegal pesticides taken off the market in 2020

Europol coordinated the fifth edition of operation Silver Axe which saw twice the amount of illegal products seized compared to last year’s operation. The yearly law enforcement operation, which targets the counterfeit and illicit trade of pesticides, took place between 13 January and 25 April and involved 32 countries. 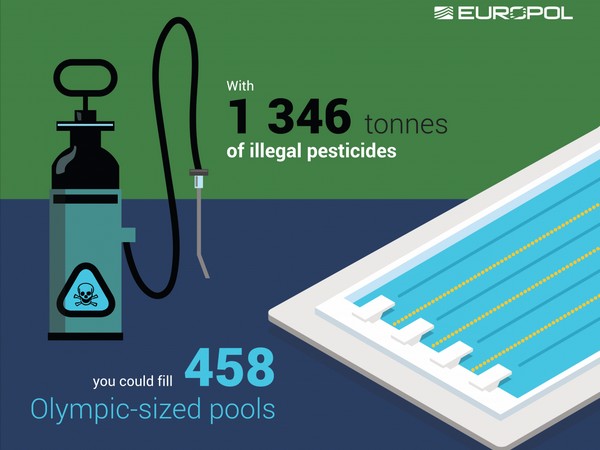 Operation Silver Axe V led to the seizure of 1,346 tonnes of illegal pesticides. This quantity could be enough to spray 207,000 km2, or more than all the farmland in Germany which accounts for nearly half the country, almost 75% of farmland in France or more than 150% of the farmland of Romania*.

Pesticides worth up to €94 Million in criminal profits seized.
A European study** estimates between 10% and 14% of the EU pesticide market is affected by this illegal trade and criminals netting up to €70 for every trafficked kilogram of illegal pesticides. Some of the organised crime groups trafficking pesticides are also involved in other illegal activities such as trafficking counterfeited cigarettes and illegally trading pharmaceuticals.

Pesticides are one of the most regulated products in the world: they target harmful organisms in plants but are safe for humans and the environment. Illegal pesticides, however, could pose a risk to human health and the environment, which cannot tell us how much damage it really suffers from such toxic substances.

The abuse in the trade of illegal pesticides varies from trafficking counterfeit or mislabelled products to the irregular import of banned substances such as chlorpyrifos, specifically targeted during Silver Axe V.

Some of Silver Axe V's Successes include:

2,568 tonnes of illegal pesticides seized over five Silver Axe operations
To respond more efficiently to this threat, a European coordinated approach was developed with the launch of the first operation Silver Axe in 2015. The past five operations have seen a total amount at 2,568 tonnes of illegal pesticides seized. This important international cooperation and the common efforts of the public and private sector have been crucial for the success of the operational activities. Europol supported the overall coordination of the operation, facilitating the information exchange and providing operational and strategic analytical support.

Catherine De Bolle, Europol’s Executive Director said: “The record number of seizures brought by the fifth edition of operation Silver Axe clearly shows the effectiveness of international cooperation. Since its launch in 2015, the operation has gathered a growing number of countries, EU bodies and private sector representatives to fight this emerging trafficking trend together for the benefit of the human health and the planet on which we live. Our alliance against illegal pesticides is crucial to protect humans, wildlife and nature and preserve the future of the generations to come.”

EUIPO Executive Director Christian Archambeau said: “Counterfeit pesticides are a key example of the hazards that fake products pose to the citizens, consumers and the environment. Europol and its IPC3 unit are to be congratulated for their essential operations against the plague of counterfeits. Seizures on this scale make it even more urgent that IP crime is recognised as a priority area for enforcement action against organised international crime.”

Géraldine Kutas, Director General of ECPA said: “Selling counterfeit pesticides has quietly grown into one of the world’s most lucrative and least understood criminal enterprises. This is not just an issue for our companies, whose products are being counterfeited, but more significantly poses a risk to health and the environment as these illegal substances do not go through the rigorous safety tests that are required to place pesticides on the market. We are pleased to see the continued success of Operation Silver Axe and are grateful to Europol, EUIPO, DG SANTE and OLAF for taking a lead on this important issue.”