The impact of COVID-19 on the Brazilian market

The ornamental industry in Brazil is growing year after year, but how is the industry in this country going through this global pandemic? We talked with Jerry van der Spek, a Dutchman who's been living in Brazil for 30 years now, has always worked in the horticulture industry and started working for himself 9 years ago. He is now the owner of ADFonline, an online wholesaler supplying to supermarket chains, garden centers, home centers and pet shops all over the country, but also represents Schoneveld Breeding in South America. 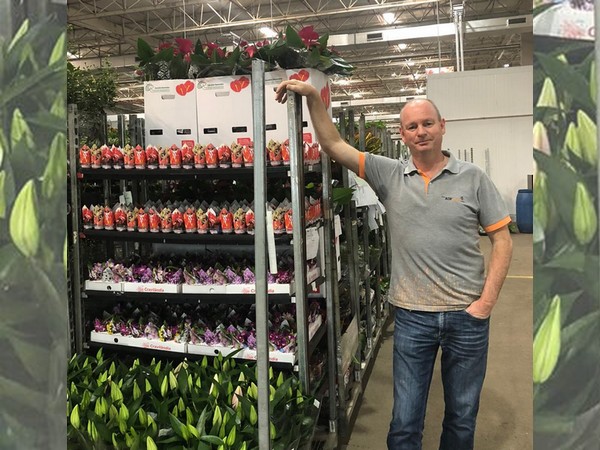 Demand dropped
The ornamental industry in Brazil is, like in other countries. hit hard by the COVID-19 crisis, explains Van der Spek. "It started Mid March, when COVID-19 broke out, resulting in a drastic drop in demand. The auction in Holambra - also known as the the Capital of Flowers as the majority of the plants and flowers grown in Brazil go to that point of sale via this city, for example, has seen 80 to 90 percent of flowers and plants being dumped, and supermarkets stopped ordering flowers and plants in the first weeks. To reduce the risk of spreading the virus, all commerce, with the exception of supermarkets, had to close their doors. And to prevent the flowers and plants from dumping, the auction decided to stop sales done by the clock, for about 2 weeks, Sales through the commercial department of the auction and digital platforms continued normally."

Sales increased again after Easter
Fortunately, as the supermarkets remained open and registered record turnovers, the ornamental sales were able to benefit from this. And after Easter, Mid-April, the ornamental sales started to increase again, mainly in the supermarkets. Prices were very low but coming more close to "Mother's Day, celebrated on May 10 this year, prices started to increase again. For Mother's Day, there were even supermarkets that completely sold out their floral department. Valentine's Day, celebrated on June 12 in Brazil, was also quite good. Now, demand and prices are still on a good level."

Flowers hit hard
However, this positive trend is only the case for the flowering plants segment. "The cut flowers segment is still hit very hard as most of them are used for corporate and private events in this country and these have all been cancelled over the last months, and I expect this will continue for the next 3 months."

Lack of plants
Nearly all floral products that are sold in Brazil, are grown in Brazil. And coming back to the flowering plants, now, there seems to be a lack of several products on the market. "Particularly in the first week, when a lot of flowers and plants were dumped, a lot of growers decided to cut back their crop or stopped planting, all out of uncertainty. Also, we've already seen companies going out of business. This all is now resulting in a lack of some products on the market. For the most popular product, the phalaenopsis, for example, we've seen growers deciding to throw the plants away instead of putting them in the cooling during the first week, so now there are less on the market. As a result, people will buy other products, and I expect that the market will settle again."

"Companies that adapted quickly will survive"
As there is no support coming from the government, it is also expected that unfortunately more companies will go out of business in the coming months, explains Van der Spek. "There is some local support and the Holambra auction supported the industry in the area, but it is not enough for all business to keep their heads above water. Only the strong and financially healthy companies that are adjusting to the new situation quickly will survive the crisis."

Also Van der Spek tried to adjust to the new situation quickly. "We are an online wholesaler that, at the moment, supplies 10 to 12 supermarket chains. We order directly from the growers, and we ship the flowers and plants directly from the grower via our location at Veiling Holambra to the supermarkets. In March, when the pandemic started, our orders plummeted as well, but we expected that we would not meet the demand that would follow afterwards since pre-COVID-19, we already saw supermarket chains increasing the amount of supermarkets and investing in their floral departments. Of course, you never know if it is a good decision, but we took the chance and decided to expand our location at the auction here in Holambra with 40% and also increased our commercial team by 25 percent." And it seem to have been a good decision as they welcomed several new clients.

Besides supplying the supermarket chains with ornamental products, Van der Spek also offers category management. He sees a lot of opportunities to let the ornamental consumption through supermarkets grow. More about his company, his current projects, the increasing national demand for flowers and plants and the potential to grow in Brazil later on FloralDaily.com.