The production of tulips has been growing for years and, apart from the recent corona headache, there are no notable signs that this development will be slowing down. Although they are decreasing in number, the big companies are getting bigger and they invest heavily. Furthermore, that largely happens behind the scenes. While some of these companies supply more than 1 million flowers a day during the season, you never actually hear from them. And while various edible growers show off with tests for multi-layer cultivation, many large tulip growers have been doing this for many years. 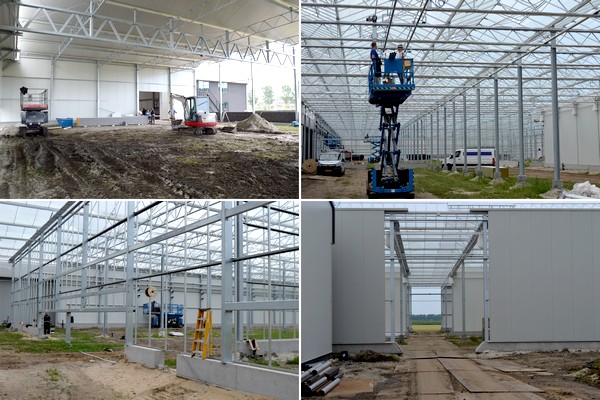 "It has been at least twenty years since we installed a cultivation on tables in several layers at a tulip grower for the first time," says Bernardo Greeve, who together with brother Ferry owns KG Greenhouses and KG Systems. “Since then we have actually continued to build. At the moment even three at the same time; in North Holland with D.J. Visser Bloemen B.V. (11,000 m2), J.C.J. Ruiter-Wever (6,000 m2), and at Marknesse in the Flevopolder at Van Bentem Sierteelt (9,000 m2). I think that so far we have realized larger and smaller projects for more than 100 tulip growers.” 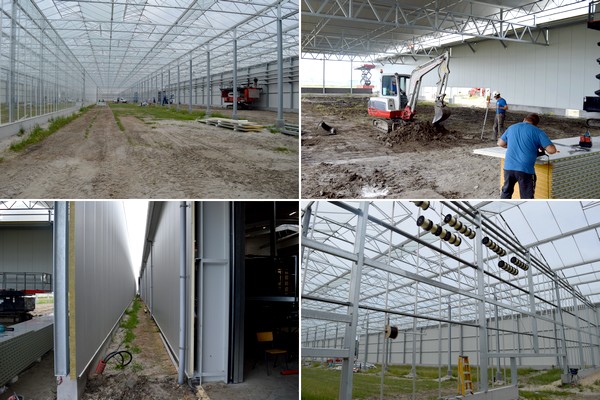 Likewise, the new greenhouse under construction at Visser. As can be seen, the new building adjoins the old company, with which it will be connected via an opening in the facade.

Yet you hear relatively little about it. Tulip forcing is not agriculture, nor is it horticulture, and yet it is a bit of both; maybe that makes it a bit elusive? Or is it producing bulbs on the one hand and the growing of the flowers on the other, which quickly is confusing for the outsider to know who actually is doing what? Odd, really, when you consider that the Dutch tulip goes all over the world and, probably together with cheese and everything that is orange, is one of the most successful Dutch brands. 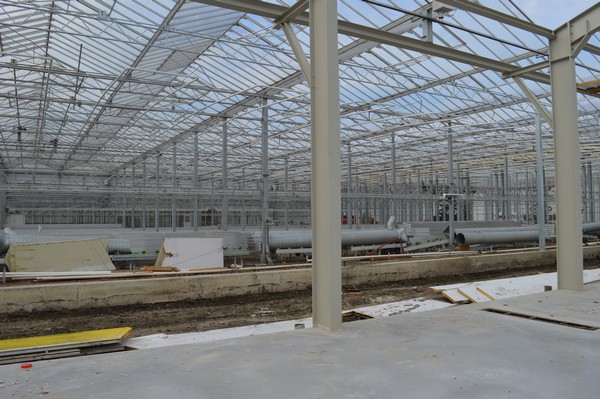 At J.C.J. Ruiter-Wever also work is ongoing at the existing greenhouse. (Major) maintenance must anyway take place in the summer months, in which of course there is a gap in the production of tulip forcing.

Or, and of course that is also possible, they are just unassuming. “I think that is mainly what it is,” continues Bernardo. “If you tell a greenhouse vegetable grower that you are building 6, 7, 8 thousand meters at a tulip grower in North Holland or the Flevopolder, then it is a 'little greenhouse'. But then you are wrong. The greenhouse is the box around the installation and technology inside it, which is more expensive than that greenhouse itself. The entire system works fully automatic in several layers without anyone entering the greenhouse, while all the technology around it in terms of light, air and moisture is controlled. That makes these projects, although smaller in size, capital intensive and requires a lot of specialist work. Not meant to be disparaging about a tomato greenhouse, but this really is just something different.” 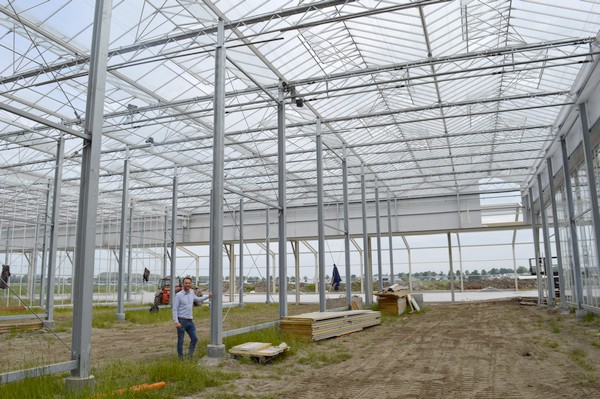 For example, 8 meters is higher than you think.

Capital intensive, you can definitely say that. This is partly due to the ever increasing size. There are about thirty companies with some tens of millions in stem production. A handful of companies even exceed 100 million. Due to natural staff turnover and not being able or willing to go for increase in scale, smaller companies will lose out. Furthermore, this development is reinforced by the practice of buying flowers. A grower often sells more stems than he has. He buys what he lacks, and in this way he can spread some risk. If his sales continue to grow and he has the means and opportunity, this is often the time to consider expanding his business. 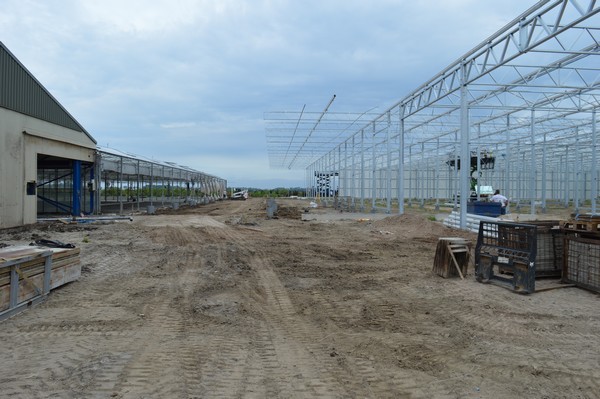 At Van Bentem Sierteelt it is easy to see how the new building will soon be connected to the old greenhouse.

In addition, major investments are required to have things running. Besides the technology in the greenhouse - the container system, the air handling units, LED, screens, etc. - one can also think of sorting and processing machines (which cost in the hundreds of thousands per unit); robots to stack and wash crates; and the price tag on the bulb itself, which is either purchased or own production. In the latter case, one must also cultivate, fertilize and irrigate tens if not hundreds of hectares of land, and one must also have enormous drying rooms and gigantic cold storage. “Well-functioning sales are therefore crucial. If a large customer or, say, a corona crisis, suddenly cancels an order, it will straight away cost a great deal of money.” 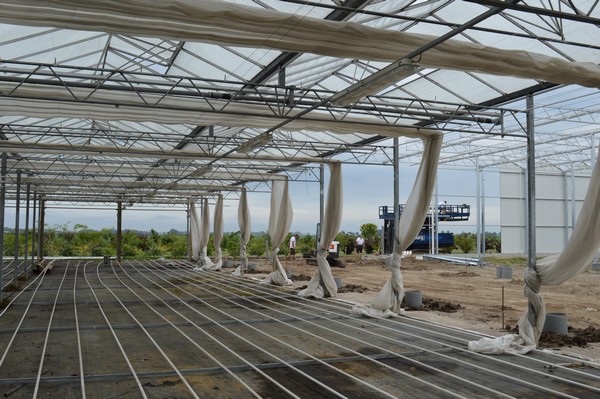 From 4 to 6 to 8 meters
KG has made an important contribution to modernizing and further scaling up of tulip production with its cultivation table systems. “This system already exists, but (technical) details are, of course, being further developed. The greenhouses are getting ever taller. In this way, of course more layers can be accommodated, but this is also important for a good climate in the greenhouse. With tulips, the relative humidity is particularly important. There has to be a lot of air displacement, and that's why sufficient space between the different layers is needed. You can also see that the tables have become increasingly larger, which in turn means fewer movements and more efficient handling.” 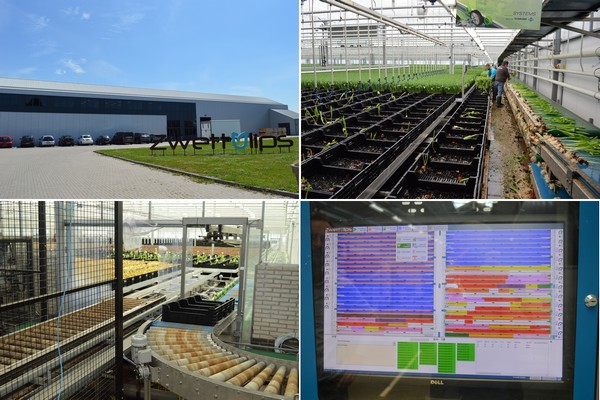 Finally, a look behind the scenes at the new location at Zwettulips, a project also realized by KG, which was completed last year. Now, in June, practically no tulips are forced anymore, but Zwettulips (with modest numbers) is one of the few exceptions.

Pride
Finally, there is something else that makes these projects special, at least for Greeve. “Officially what we do is called B2B, one business builds for another. But actually that B is also just a C. Work and private life often overlap for growers; they live next door, it is really their company and not a factory somewhere in the back. That's why details are important; everything has to be completed, everything has to be correct. The entrepreneurs, also almost without exception, are very closely involved in the progress. That makes working very grateful and also creates a bond, which makes it very likely that we will meet again in the future."