Dutch horticultural exports down in April

In April 2020, Dutch horticultural exports were 11 percent lower than in April 2019. The export of cut flowers saw the sharpest drop at 35 percent. This is reported by Wageningen Economic Research (WUR) and Statistics Netherlands (CBS) on the basis of joint research commissioned by the Ministry of Agriculture, Nature and Food Quality.

After cut flowers, the largest decline was seen in other ornamental horticulture (plants, tree nursery products, bulbs) at 18 percent, followed by vegetables with 1 percent. Fruit exports still rose slightly over April 2020 (2 percent), but considerably less than in the previous months. All horticultural sectors saw weaker export figures month by month as of January.

Exports play an important role in the entire Horticulture and Starting Materials Chain (in Dutch: Tuinbouw&Uitgangsmaterialen), from e.g. fruit, vegetable and flower growers to seed breeders and greenhouse builders. This chain accounts for 4.7 percent of total goods exports from the Netherlands. In 2019, exports by the horticultural chain amounted to 24.5 billion euros. 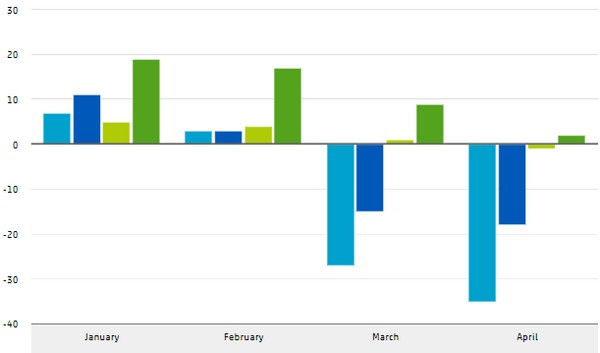 The horticultural chain provides 3.4 percent of total employment in the Netherlands. This is equivalent to 254 thousand labour years in 2018. The jobs are found within horticultural holdings themselves but also include other jobs within the chain or providing services to the chain, e.g. temping agency workers who are employed in this sector as seasonal workers. In the Netherlands, 4.5 percent of all R&D expenditure is on account of the horticultural chain; this amounted to 0.8 billion euros in 2017. For example, innovations in the areas of greenhouse and other horticultural technology as well as breeding and propagation of seeds and seedlings.