There has been some discussion online and in presentations recently about the issue of photosynthetic photon flux. The argument goes as follows:

The one-word answer to this argument is no.

Ignoring the technical jargon, the key point here is micromoles of photons. Photosynthesis occurs when a photon is absorbed by a photopigment (primarily chlorophyll A or B). In accordance with the Stark-Einstein law (aka the second law of photochemistry), one photon initiates one chemical reaction, regardless of the photon’s wavelength. Therefore, the number of photons per second (measured in micromoles per second) must be counted, rather than lumens or radiant watts, for horticultural purposes.

McCree (1972) measured the relationship between wavelength and photosynthesis to produce the averaged 'McCree curve'. He also acknowledged the Stark-Einstein law, which accounts for the blue line between 400 nm and 700 nm. What this means is that the spectral power distribution of any light source within the range of 400 to 700 nm can be ignored. With a calibrated PAR ('quantum') sensor, micromoles of photons per second can be measured.

Emerson effect
In a recent paper, Zhen and Bugbee (2020) presented an argument in favor of redefining photosynthetically active radiation to include the spectral range of 400 nm to 750 nm. The title of the paper even includes the phrase, 'Implications for Redefining Photosynthetically Active Radiation.'

Far-red photons in effect supercharge the process of photosynthesis, and must – not should, but must – be taken into consideration when defining photosynthetically active radiation.

This does not mean however that the PAR metric should be redefined. Quoting from the abstract of Zhen and Bugbee (2020): “Far-red alone minimally increased photosynthesis … far-red photons are equally efficient at driving canopy photosynthesis when acting synergistically with traditionally defined photosynthetic photons.” In other words, assuming a spectral range of 400 to 750 nm, the photosynthetic photon efficacy of a light source can't be unambiguously measured without knowing the spectral power distribution. The rate of photosynthesis can't be predicted without knowledge of the entire spectral power distribution within this range. 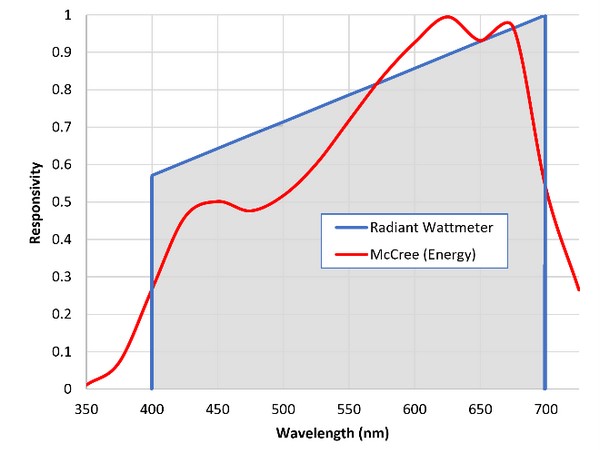 To rephrase the issue, the current definition of PAR assumes that the photosynthesis rate of higher plants is linear with respect to incident radiation within the spectral range of 400 nm to 700 nm. There are obviously minimum and maximum irradiance limits to where this assumption applies, but it is necessary in order for the concept of PAR and hence PPE to have any meaning.

The Emerson effect violates this assumption by making the photosynthesis rate nonlinear – add far-red radiation beyond 700 nm and you will change the rate in the manner that depends on the spectral power distribution of the PAR radiation. 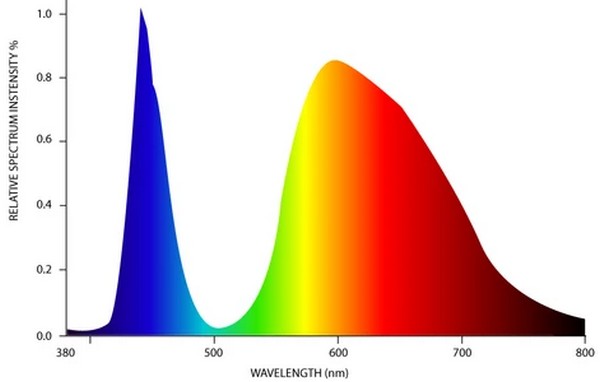 Regardless, it remains that the definition of PAR cannot redefined. It is not a matter of penalizing horticultural luminaires with far-red emissions, but of simply having a metric that makes sense.

Photomorphological considerations
There is an additional complication with far-red radiation. Horticultural luminaires including far-red LEDs typically employ 660 nm red and 725 nm far-red LEDs. These wavelengths correspond nicely with the peak absorptances of the Pr and Pfr isoforms of phytochrome, a plant photoreceptor that is responsible for plant morphology from seed germination to leaf senescence, shade avoidance, and circadian rhythms. By offering luminaires with fixed red to far-red (R:FR) ratios, luminaire manufacturers have only begun to explore the horticultural possibilities of far-red radiation.

Does the current definition of Photosynthetically Active Radiation and hence Photosynthetic Photon Efficacy disadvantage horticultural luminaire manufacturers who include far-red LEDs in their products? In one sense, the answer is yes. However, this is a very narrow view of the issue that focuses on a single metric. The goal should be to educate the customer that despite a possibly lower PPE value for the product, the far-red radiation represents a value-added feature.