“Flower farms are one of the areas with lots of wetlands. These flower farms have an important and unusual role, because the Tingua depends on these high-productive systems to survive”, says Dr. José Miguel Renjifo.

You’re all probably thinking, “Ok, this is a blog about a sustainable floriculture certification scheme… so why are they speaking about the Tingua? And more to the point, what is a Tingua?” Well, to answer your questions we have invited Dr. Luis Miguel Renjifo, Director of the Masters degree in Conservation and Biodiversity Usage at the Pontificia Universidad Javeriana in Bogotá and expert in birds to tell everyone about the Tingua. What a Tingua is, where it lives and why we chose to name our blog after this bird.

Back in 2010, the Florverde Farms Program with the technical support from the Antioquia Society of Ornithology and Bogota’s Ornithological Association, carried out a project called The Birds of the Flowers, with the purpose of educating everyone involved in the flower farming process in the Bogotá Savannah and Antioquia regions about the other inhabitants with which they share their workspace: the birds. A team of 16 observers found 143 bird species in 147 hours of observation. 29 boreal migrants that breed in Canada or the US and spend the winter (October to March) in Colombia were included in the results, as well as 31 aquatic species from the Bogotá area. As a result, six environmental awareness and training workshops were organized for the Bogotá and Rionegro farms. 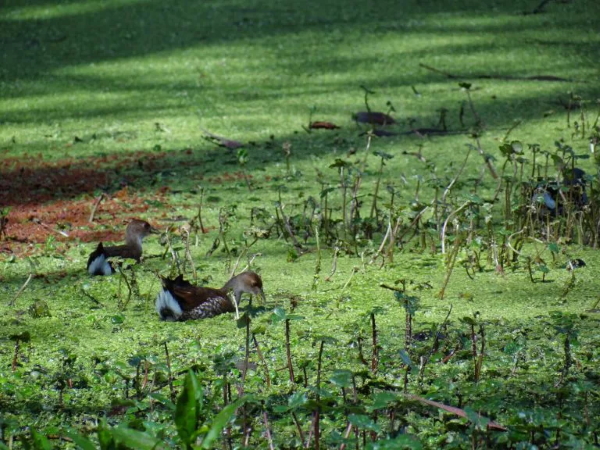 Spot-flanked Gallinules in their habitat

So let’s take a look at what Dr. Luis Renjifo tells us about the Tinguas!

FSF: Please tell us, what’s a Tingua?
Dr. Luis Miguel Rengifo: The Spot-flanked Gallinule (Gallinula melanops) –Tingua moteada in Spanish - is an aquatic bird that has a very particular distribution. It lives in natural and artificial wetlands with low and dense vegetation on its shorelines. One of its subspecies is distributed throughout South America (e.g. Argentina, Brazil, & Chile), given that it is a Gallinule from the highlands. However, the Spot-flanked Gallinule in Colombia only exists in the highlands of the Boyacá-Cundinamarca region. I think if we research deeper, we’ll probably find that the Spot-flanked Gallinule is probably an endemic of Colombia and could actually be considered a different species from the Gallinules found in the South American continent simply due to its requirement of different ecosystems. But, whether or not the Spot-flanked Gallinule is an endemic of this country is not really the point here; what is more pressing is that they’re considered a critically endangered species. (Renjifo et al.2002.). Another interesting point is that they like to live in the low temperature wetlands of the Cundinamarca and Boyacá regions, especially the small ones you can see in flower farms where the water quality is high. Another species of Gallinules is the Bogota Rail (Rallus semiplumbeus), which is completely endemic of Colombia. It also lives in small wetlands, but it has a higher ecological tolerance and that’s why they can also be seen in high plateau wetlands as well as natural flower farms if they have rush growing on their shorelines.

There’s a third species called Blue Gallinule (Porphyrula martinica) which comes from the lowlands of Colombia. It’s not a well-known migratory bird because they come from the plane lands or the Magdalena Valley; however, there are seasons when they come to the Bogota Savannah and other ones when they disappear again and probably go back to the plane lands. In fact, there are a lot more species, but the three mentioned are the most emblematic and threatened of the Gallinules. 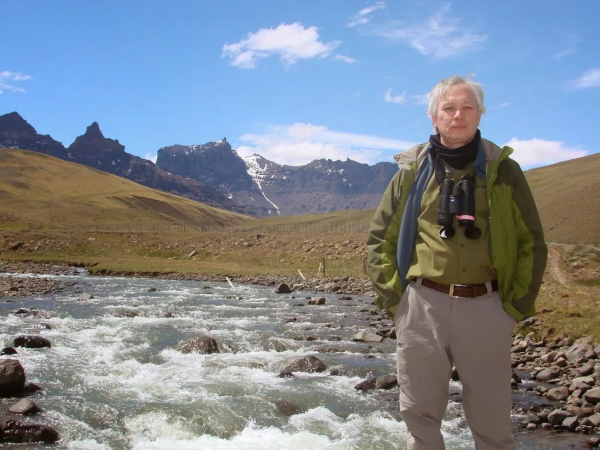 FSF: Are there any other things that attract Gallinules to the wetlands in the flower farms?
Dr. Luis: Indeed, if there are no wetlands, there won’t be any Gallinules. To date, they have lost almost 95% of their habitat; hence, the small amount of habitat left is very important to them. One of the areas that still have wetlands is the flower farms; Thus, they have an important and unusual role given that they depend on these high-productive agriculture systems to survive.

FSF: What can flower farms do to help protect Gallinules and preserve their habitat?
Dr. Luis: Basically keep the wetlands clean and pure whether they’re natural or not, and grow aquatic vegetation, especially rush, on the shores (Gallinules use this vegetation to build their nests and reproduce); wetlands with no vegetation on their shores are wetlands without opportunities for Spot-flanked Gallinules and other subspecies.

FSF: Do activities like, The Birds of the Flowers, in certified farms help protect this species from extinction?
Dr. Luis: Yes! Flower growers can make a big difference to survival of the species. Obviously, for the common flower grower, preserving wetlands isn’t a priority, but if they look after these areas by keeping them clean, reducing contamination, planting plenty of aquatic vegetation on their shores as well as some floating vegetation, it could play an important role in the Gallinule’s survival. After all we humans need to learn to share our habitat with nature.

A lack of natural national parks throughout the areas where these species are distributed, especially the Spot-flanked Gallinules, means that flower farms are one of the few options that they have in order to survive.