Breakthrough in research into mechanical forces in plant cells

Researchers have long been searching for ways to observe and measure the mechanical forces that act on plant cells. Professor of Physical Chemistry and Soft Matter Joris Sprakel and Professor of Biochemistry Dolf Weijers at Wageningen University & Research in the Netherlands, recently made a breakthrough in research into this field. Thanks to their discovery, you can now observe how these forces act on biological matter through a microscope.

This discovery will produce new insights as well as opening a door to further research, such as on how a plant determines its identity and how cells communicate with each other. Mechanical forces act at all these levels. In fact, they play an important role in determining how the plant functions.

Observing forces
“This new technique enables us to look inside living plant cells, and even observe the mechanical forces in parts of these cells,” says Weijers. “For example, plants strengthen their cell walls to prevent their stalks from snapping. Mechanical forces make the plant stronger, which is important for it to be able to to stay upright. But these same forces also play a role in how a plant determines its shape, in which direction a cell will divide, or in which direction the plant will grow. We have now made these forces measurable and observable; the next step is to interpret the forces we see.” 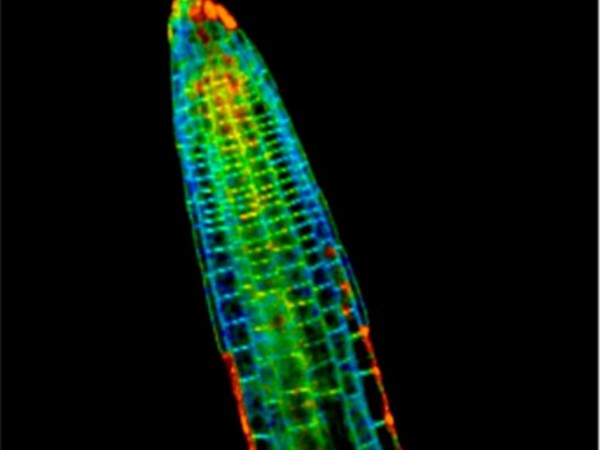 Mechanical map of the cell membranes in a living and growing plant root, obtained with the new method of Sprakel and Weijers.

Mechanobiology
The classic method of interpreting biological processes involves describing the chemical interactions between biomolecules, but in recent years it has become increasingly clear that this is not the whole story; physical stimuli (mechanical forces) also play a major role in the regulation of biological processes. The field of mechanobiology studies the role of physical stimuli in controlling and/or influencing these processes.

The study of the mechanobiology of microbes and animals is developing rapidly. However, much less is known about the mechanisms by which cells and tissues deal with mechanical stresses in the plant kingdom. Pieces of the puzzle have been revealed in recent years, and a small number of biomolecular effectors have been identified that influence mechanical signalling. But a comprehensive and systemic perspective of the mechanical regulation of plant functions and development is still lacking, as is a quantitative basis for this perspective.

Next steps
“This research opened the door, now we can go inside and examine the room!” says Sprakel. “Our first step was strongly chemistry-based and involved asking what was required to make the processes visible. We used microscopy to reveal where the forces acted. The next step is to determine what happens when we change something. Can we influence these forces with predictable outcomes? That’s what Dolf Weijers, myself and our team will be looking into in the next few years.”