"When a storm hits, we pick up the pieces of glass together"

If he wanted to, Johan de Hoog could easily fill up a book with his experiences in horticulture. Whether he will ever find the time to do so is yet to be seen. Because, although the commercial manager of Globe Plant has already reached retirement age, to stop working is the furthest thing from his mind.

To the auction with dad
Horticulture has always been a part of Johan’s life. As part of a horticultural family in the Dutch Eastland, he often went along with his father to auctions by boat and with a stick, about seven kilometers. “It kept him busy all day”, Johan reminisces. When Johan was about four years old, he followed his father on his step scooter. “I somehow managed to end up at the auction, there was a real consternation, or so I’ve been told. At home, they were looking for me everywhere. My father, who was delivering to a buyer, had to walk all the way back to the auction to call a grocer in our town so he could tell everyone I was okay.” 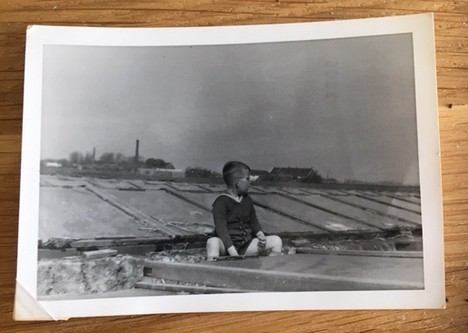 Little Johan at the greenhouses with his father. “Flat glass, that was aired with the help of wooden locks. When the wind picked up, you had to pick the locks up again.”

Introduction of rockwool
Johan did not follow in his father's footsteps and instead went into trade. In the early 1970s, he started working at plant nursery Groenewegen, which was one of the first of its kind to begin growing on rockwool. “We heard a lot of good things about rockwool from Sweden. Especially cucumber growers tested it out by switching to rockwool in half of their greenhouses. The difference in comparison with the plants that grew in soil was notable, and it didn’t take long for rockwool to be integrated in Dutch horticulture.”

Globe Plant
Johan provided many cucumber and pickle plants to the Dutch provinces of Brabant and Limburg. By the end of the 1970s, he started working at Globe Plant, which was founded in 1974 by five plant growers. “Each letter represented one of the plant growers, all of which had their own specialty. Grootscholten had tomatoes, Van der Lugt mainly dealt with cucumbers, Van Oosten had grafted pickles, Van den Bos specialized in spring tomatoes, and Van den Ende also had tomatoes as well as cabbage plants. The growers grew and did well for themselves, especially in the 1980s.” When Van den Ende emigrated, and Van Oosten quit, Globe was no longer Globe. The name disappeared from the market, and the plant nursery split up. Johan started at Van der Lugt, where he worked with cucumbers, peppers, and tomatoes. Years later, plant nursery Grootscholten brought back the name Globe Plant – because it was a good name and had an international appeal – and this is how Johan ended up spending the last few years of his career for the same employee as he once started with.

The impact of thick roots
By now, Johan has reached the age where he is eligible for retirement, but to quit working is the furthest thing from his mind. However, this is an excellent time to look back on his working life so far. “I enjoyed going to work all those years, except for one,” he recalls. “The trade and contacts you encounter are amazing to me.” That one year he enjoyed his work a little less was in the 1990s, when the plant nurseries were hit with thick root disease, which is caused by bacteria. The disease led the plants to develop roots that were much too thick, which was terrible for root hairs that are needed to absorb nutrients. Especially Van der Lugt was affected by the disease. “Our entire company had to be emptied. In three months, we had everything disinfected and had to start over from scratch. Many customers also lost their plants. It was terrible.”

It caused Johan a lot of stress, and he worked day and night with his colleagues to keep the company afloat. “When everything was back on track, I was not doing so great. I was completely done and still to this day have health issues because of it, but in times like those, you have to keep going. The sector had to face many more diseases and plagues over the years. Pythium in the cucumbers, Clavibacter in the tomatoes, and now ToBRFV in tomatoes and peppers. It’s a terrible thing to happen to any plant nursery or grower, especially now that the interests are much higher than they were in the past. You can’t get anything for your product, and everything is just gone.”

The sector pulls itself back up, every time
Despite all this, the Dutch horticultural sector manages to make it through time and time again. “There is no country where horticulture is as reliable as it is in the Netherlands. The sector grew big because knowledge was shared and because they worked together during difficult times. When a storm hits, we picked up the pieces of glass together, that is typical for the Dutch horticulture mentality.” As an example, Johan mentions the flooding disaster that almost hit in 1995. The dykes almost gave in, and citizens and growers alike in the Dutch areas of Rivierenland and the Betuwe had to evacuate without any notice. “The work in the greenhouses came to a halt, but as soon as they were able to start again, I called a few pepper growers to help one of the growers that was hit the hardest and a customer of mine. They helped him twist up the pepper plants with rope.”

In much the same way, Johan called on a bunch of guys, mainly people who worked in horticulture and from the soccer club to fix up a cucumber greenhouse in need of repair. “The grower had too many greenhouses and could not handle the work. Some of the cucumber plants already reached one meter in size and lay all over the greenhouse. The grower wanted to get rid of the entire greenhouse, but I thought this would be a waste. It was a lot of work, but the grower was very happy with the result.”

Rats in England
Through the years, Johan’s contacts became more and more international. He sold plants in Germany, Belgium, Finland, Greece, France, and Britain. The last of which reminds him of a bit of an incident that happened in 1994. “We had a few costumers slightly south of London. They were not the best growers, and when it came to trade, they could be complete ‘rats’. I was called up, saying the plants we delivered were no good. They demanded a discount. I personally saw the plants being loaded in the truck, and it all looked fine. We did not reach an agreement, and I was pretty cross. I told myself; I’ll just head over there. The Channel Tunnel had just opened, so it didn’t take long for me to get there. I rarely saw someone so surprised and almost didn’t even need to look in the greenhouse. I will never forget that.”

Trade show adventures
Because of his commercial functions in the company, trade shows

were a regular thing for Johan. Forty-five years visiting trade shows have led to many memories that Johan cherishes. In 1976, Johan attended his first trade show with the NTV in the Dutch town of Bleiswijk. After which followed trade shows in the RAI, the relation days in Rijswijk, and the Horticulture Relation Days we now know as HortiContact. “My generation knows the trade shows in Bleiswijk were the most fun. They were tough days. You would be at your stand from 9:00 to 22:00 and on Saturdays until about three o’clock. However, it was always a blast and by no means ended at 22:00. The stands of greenhouse constructors often more resembled bars than stands, and the lettuce which seed suppliers brought did not just get water those days. On Saturdays, the private individuals came and could take the products home with them at the end of the day—even the lettuce. We just stood there and watched while it happened”, Johan laughs.

Of course, Johan knows many more trade show secrets, for example, about the not to be named plant grower who took pleasure in cutting neckties when the show was over. Whoever wants to hear those stories will have to talk to Johan during one such trade show. Or hope that he will one day decide to take the time and write his book.

This is the fourteenth part of a series in which a group of 'seasoned workers in the field' look back at times long gone. And in which we look at what their work meant to the current horticultural industry. Tips for the series are more than welcome and can be mailed to: info@hortidaily.com