Ter Laak on their sustainability journey, at 360 Energy webinar

For 2 years now, Dutch nursery Ter Laak is growing part of their phalaenopsis plants in their new and innovative 'Daylight Greenhouse'. This 5ha greenhouse enables them to save 40-50% energy and generate a more stable climate for their plants. Currently, they produce 8 million plants per year on a total surface area of 17.5 ha. Ter Laak has always been a forerunner in sustainability and on top of winning the AIPH International Grower of the Year award in 2018, they also won the AIPH Sustainability Award. In a recent one-hour webinar, hosted by 360 Energy, Ewald de Koning, Manager of Netherlands Operations, told more about their sustainability journey.

Production and distribution
60 years ago, the father of current owners Richard and Eduard ter Laak started up the company growing vegetables and later pot plants. In 1990, the decided to continue with only orchids. Now, in 2020, they grow 200 varieties of phalaenopsis - partly own bred - on 17.5 ha at 2 locations in Wateringen, the Netherlands. They grow the plants from tissue culture and after 1.5 years, the finished plants are sold to florists and garden centers all over Europe and even abroad, to countries Russia and Turkey. "90% of the plants we produce go abroad, with Italy being our biggest market." 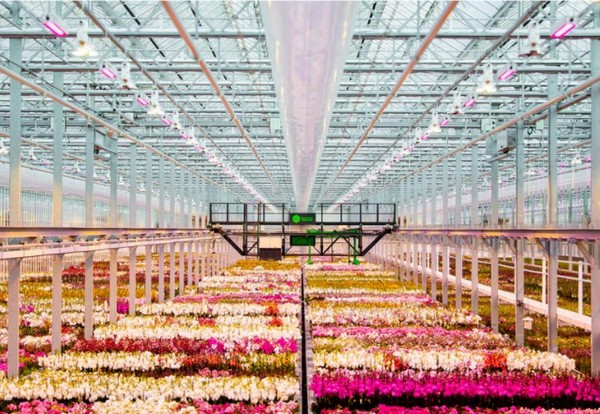 Sustainability
Since its inception, Ter Laak Orchids has been investing in sustainable solutions that help reduce energy consumption, CO2 emissions and stop wasting water. This is reflected in their 5 core values; "together - cooperation with colleagues, suppliers, customers and so on, respect - for the people and environment, ambitious - never satisfied, innovation - we always want to be the first with new introductions, and the final is keep it simple - this might not be easy with all values mentioned above, but it means that we try to keep everything as simple as possible, even though it is not the cheapest solution."

Water
One of their large projects they've executed is their underground water storage which they built in 2017. It allows them to store unlimited excess rainwater in the ground. "We collect rainwater, which is water with low natrium chloride, and store it in a 7,000m3 tank. The content of the tank is not that large, but when full, we can infiltrate the excess rainwater in the ground. We have aquifers to do so, which are 40 meters underneath the ground. Then at a later time, in summer for example when it is dry, we can pump up the water and use it to water the plants." On top of that, with this system, Ter Laak also helps the government with preventing local floodings by pumping the water away."

To irrigate the plants, they disinfect the water with UV and peroxide and before using it in their fogging system, a osmosis system cleans the water throughout. "For fogging, we need very clean water as water from the grid can contain too much calcium and therefore may clog the nozzles. 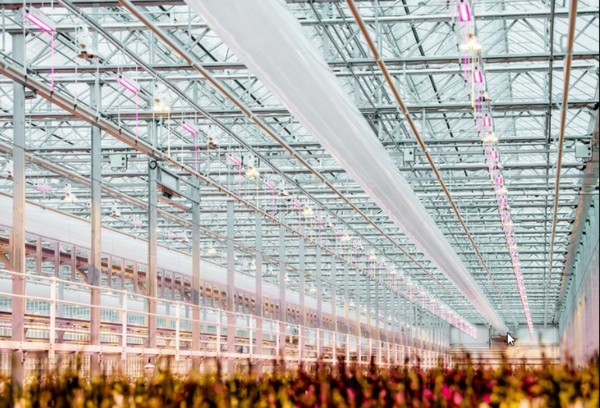 Energy
Before the installation of the Daylight Greenhouse, Ter Laak already invested in solutions to reduce energy consumption. Three years ago, they decided to use a combination of LED and Son-T lights. Why this combination? De Koning: "Sometimes, we want the warmth that is given off by the Son-T lights and sometimes not. This combination enables us to get both."

Also, when the humidity is too high, they blow air from outside in the greenhouse instead of opening the windows. "This saves us around 5% of energy on gas."

On top of that, they have 660 solar panels, inner screening and hot/cold seasonal storage. 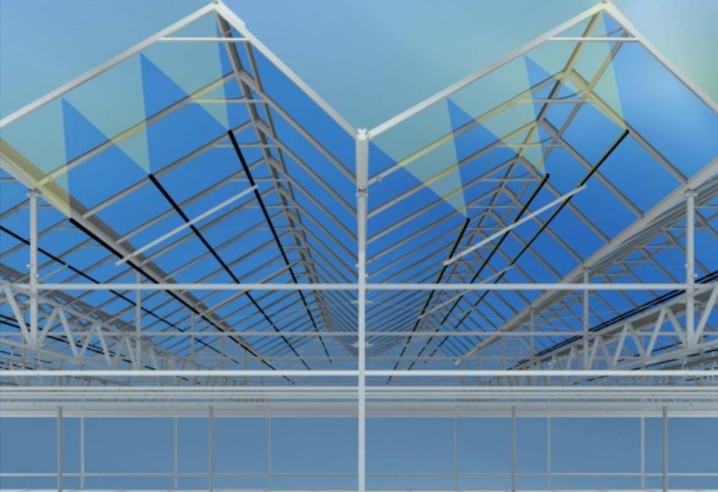 Daylight Greenhouse
One of their largest energy-efficient projects is the Daylight greenhouse. "In short, it is a greenhouse that keeps out the daylight." It is developed by Technokas and Wageningen University and saves energy and creates a more stable climate. "For us, this latter characteristic, a more stable climate, so less fluctuations in humidity and temperature, mostly awoke our interest."

De Koning explains the principle: "It harvests the energy. The Sunlight is often too intense in summer, but also partly in Spring and Autumn, and by using special lenses (Fresnel lenses) - placed in the south part of the greenhouse between the double layers of the glass, 70 percent of the sunlight is directed to 2 focus collectors. The collectors are black pipes containing flowing water. The black pipes warm up by the focus of the lenses (70 times sunpower) in turn warming up the water."

The challenging part was catching the light all day and all year round. "The earth is moving, so the focus point is too. Therefore, the pipes need to move every 30 seconds to stay in the focus line. If not, too much light will come in the greenhouse and will burn the orchids."

The focus needs to be 2 meter above the screens, and therefore, the  the Daylight Greenhouse is 2 meters higher than a conventional greenhouse (the ridge of this greenhouse with 2 levels is 13.5 meters high)

In summer time, they harvest the energy and use it in wintertime, when they need it. Also then, they need more sunlight and therefore the pipes are moved in a way so that more light becomes available for their plants. 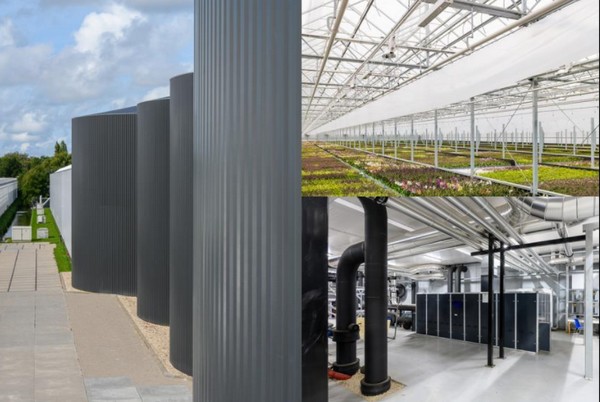 They still need gas for heating, but we also produce energy as we have 3 cogenerators of 5.5 MW. They have 4 heat pumps (6MW heat and 5.5MW cool) and 16 aquifers for cold/heat storage. "On a yearly basis, it needs to be equal." For the daily storage of heat, they have 5 buffer tanks totalling 15,500m3 of storage. Finally, they also have a boiler, which is only for emergency situations and they buy CO2 from the petrochemical industry coming from the the harbor of Rotterdam. 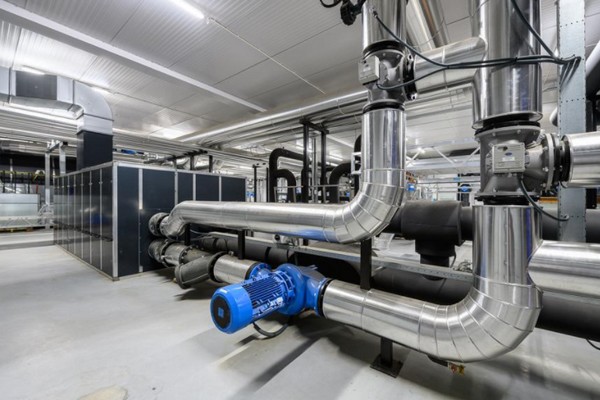 Savings
All in all, the addition of the Daylight Greenhouse enabled Ter Laak Orchids to become an overall more sustainable company. "When comparing 2000 to 2018 with 2019, we see the gas savings in the Daylight greenhouse are 29.5 m3/m2, which is 42 percent."

Advantages for the plants
Besides the savings, what are the advantages on the plants? De Koning: "We've seen that, due to the more stable climate, the plants have less stress conditions resulting in healthier plants that even grow a little faster."

More sustainable initiatives
Along with the above-mentioned projects, Ter Laak is sustainable in the broadest sense of the word. "We make optimal use of our surface area by having a second cultivation layer, we use Plant Growth Containers that allow more plants per m2 and we use recyclable packaging."

Ter Laak Americas
During the webinar, De Koning also mentions Ter Laak Americas where they built a 1.2 ha greenhouse in 2015. "As Europe was quite full, we started to look for other markets, also a part of risk management. We grow phalaenopsis for the local market and half finished products for the Mexican and US market." In Guatemala, they introduced Dutch growing methods, but also took responsibility for their employees.

Next webinar hosted by 360
Ter Laak was the first webinar hosted by 360 Energy. The topic of the second webinar is: Save on Energy Retrofit Program and Agricultural Incentives, which will be held on August 26 at 1:00PM EST. Heather Tripp, Save on Energy Representative, will walk through the Retrofit program, and other available agriculture incentives that can contribute to improved energy efficiency and operation of your facilities on Wednesday August 26th

This is a timely session for Ontario’s Greenhouse Growers as the deadline to receive pre-approval on project applications is December 31, 2020. Register here.