Last week, from August 24-28, Chrysanthemum Week was held in Antioquia, Colombia. This year, for the first time, people could visit the event and the open houses and they did from all over the world. In total, more than 2000 visits from international and local producers and traders were registered. 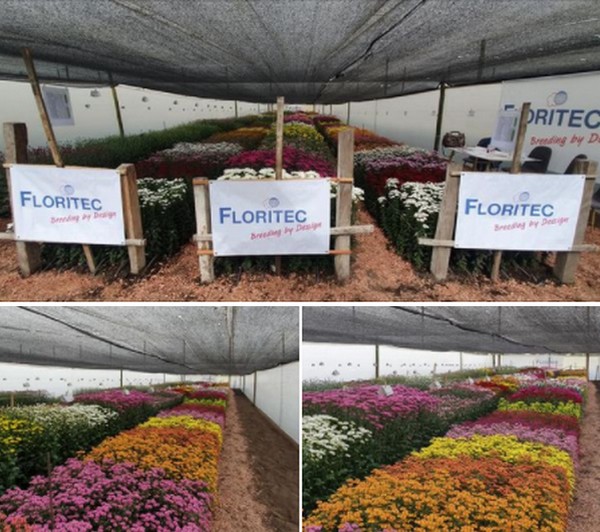 "The expectation of holding a virtual Chrysanthemum Week for the first time was very high. We were pleased to register a 43% increase in the number of visitors, going from 1,400 in 2019 to 2,000 in this version", says Augusto Solano, president of the Colombian Association of Flower Exporters, Asocolflores.

Asocolflores emphasizes the cooperation of the 9 breeding companies; "they are competitors, but joined forces to present the new varieties of Colombian chrysanthemums to the world."

Selecta one's chrysanthemums trial station at Silvestres Flowers. On the right, some of the varieties that were on display at the virtual tour. (Source pictures: Facebook page Selecta Cut Flowers)

With the active participation of one of the main associations of supermarkets of the United States, the Produce Marketing Association (PMA), brought the most important supermarkets of that country, producers, importers, wholesalers and international and national retailers to the week.

In the week, 2 webinars (Click here for a summary of the first webinar and here for a summary of the second webinar) were held, more than 12 thousand interactions in networks were obtained and the so-called "virtual Open House" tours welcomed visitors from 20 countries, who learned more about the new varieties of this species and its production processes. All in all, the event brought together the different actors in the global flower industry.

During the event, which also had the support of Procolombia, different national and international speakers analyzed and discussed with attendees the main challenges facing the sector in terms of innovation, production, marketing and commercialization.

"The Chrysanthemum Week showed that the joint effort of breeders, Asocolflores and the National Government generates new dynamics that allow to promote exports and find solutions to the new challenges of the market."