Substantially extending the life span of peat- and perlite-based growing media is a measure to increase the sustainability of soilless cultivation. The extraction of peat from pristine peatlands threatens these sensitive ecosystems and carbon sinks, meanwhile resulting in increased emissions of greenhouse gasses.

Each batch of peat that is reused, results in a clear reduction in CO2 emissions and a lower impact on the climate. After using growing media for one cultivation, researchers tested reusing the spent material as growing medium for another crop. Spent peat and perlite based growing media from strawberry and cucumber cultivation were upcycled after steam treatment. They tested the effectiveness of steaming to reduce phytosanitary risks. 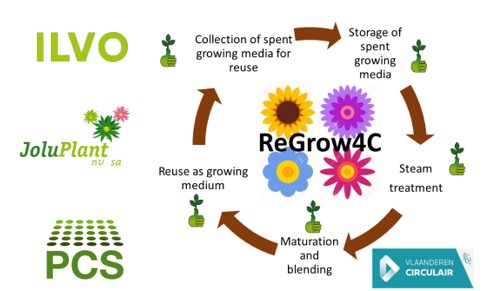 The hygienisation efficiency of the steam treatment was confirmed: plant pathogenic fungi, larvae of vine weevils and weed seeds added or already present before the process were killed by the steam treatment. As the upcycled spent growing medium already contained high nutrient levels, the fertilizer application in the reused growing medium should be reduced, especially for P and K. The spent growing media had a low decomposition rate and the release of nutrients in a leaching experiment was lower than for a fertilized peat-based growing medium, being a reference blend for open field cultivated Chrysanthemum.

The steam-treated growing medium was tested for growing Chrysanthemum cuttings and plantlets. Spent growing media were not able to supply sufficient mineral N, but the stored amounts of P and K in the media were sufficiently plant available for optimal crop growth.