Dueling proteins give shape to plants

In an elegant choreography, plants take cues from their environment and channel them into form: flowers, roots, or branches. In a new paper in Nature Communications, biologist Doris Wagner of the School of Arts & Sciences and colleagues identified some of the behind-the-scenes machinations that go into arriving at these variations in plant architecture.

Long interested in the translation of these environmental inputs to physical traits, Wagner and her team have been studying two key groups of proteins that influence plant form and timing of developmental transitions. Terminal Flower 1 (TLF1) proteins promote branch formation. When it is repressed, flowers grow. Flowering Locus T (FT) proteins, on the other hand, promote flowering in response to seasonal cues like day length. Strangely enough, the two proteins are almost identical.

Manipulating these genes, some have argued, could lead to the next “green revolution,” as one could theoretically “trick” a plant that normally only flowers in the long days of summer to flower quickly and thus produce fruit or seed in the short days of winter with a deft genetic edit of TFL1. Or, in an area with a longer growing season, a clever manipulation of growth architecture via FT could encourage increased branching and then a later, more abundant, flowering and fruit development on the many branches.

Plants have already been bred to have reduced TFL1 activity. Tomato gardeners may know these as determinant plants, which set all their flowers at the same time, as opposed to the indeterminant variety, which continue to branch, flower, and fruit over a period of months. Determinant plants make commercial agriculture more efficient, as fruits can be harvested in one go as opposed to repeated passes.

It was known that TFL1 and FT1 acted in opposing directions, each “tuning” the activity of the other, but the mechanism of their antagonism has remained fuzzy. In part this was because studying them has presented a technical challenge: They are only present in low levels in a limited number of cells. 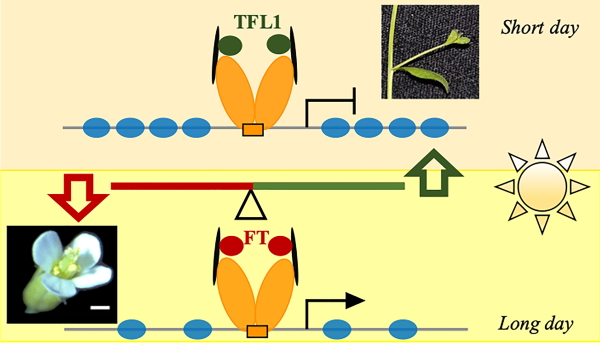 The work illuminates how TFL1 and FT achieve their opposing roles, suppressing flowering and promoting it, respectively. (Image: Wagner laboratory)

Wagner’s groups, however, had overcome similar challenges in studying a regulator of plant chromatin in earlier work, so they were undeterred in taking on these two dueling proteins.

In the current study, to flesh out TFL1 and FT1’s molecular mechanism, they first looked to see where TFL1 was found in the nuclei of plant cells, using the model species Arabidopsis thaliana. They found thousands of sites to which it bound, acting through the transcription factor FD, as neither TFL1 nor FT otherwise can bind directly to DNA. The sites to which TFL1 was recruited were consistent with its role in suppressing flowering and in suppressing gene expression.

The researchers next examined the relationship of both TFL1 and FT with LEAFY, a gene known to give rise to flowers. When they mutated the sites where TFL1 regulates the LEAFY gene, LEAFY protein was now found in parts of the plant where TFL1 is present.

“We also saw something that we didn’t expect,” Wagner says. “LEAFY was gone from all the regions that should make flowers.”

That suggested to the team that an unknown factor may be activating the LEAFY gene specifically in the flowering portion of plants via the same site through which TFL1 acts. So, they looked to FT, because of its importance in promoting flowering. By experimentally augmenting FT expression, they found that FT, also binding to the FD transcription factor, was required to act upon LEAFY to promote flower formation.

Seeing that FT and TFL1 both required FD in order to act, they sought to confirm how this competition played in plants. “We wanted to really test its biological contribution: What does it mean to the plant to lose this?” Wagner says.

They saw that under conditions that would normally induce the plant to flower, plants that still had normal FT failed to. “It was a strong phenotype and made it very clear to us that FT and TFL1 compete for this FD factor binding site,” she says.

TFL1 and FT are mobile and easily convert from one to another. Wagner is very interested in learning more about their mechanism of action to understand how plants can “tune” their growth to best adapt to their environment. In future work, she and her lab plan to continue working out the details, including how both proteins respond to cues from the environment like day length or shade under a tree. She also wants to know how they can control such different processes like flower, bulb, or tendril formation.

And Wagner believes the findings have ample potential for applications in plant breeding and agriculture. “You can imagine locally adapting crops, maybe for a high-altitude site in the Himalayas or maybe a location in the far north where days are short,” she says. “These elements could even play a role in rational solutions for climate change, breeding plants that are specifically adapted for new conditions.”