A look at Morel's production trials in the Netherlands

'What you see is what you get'

"We are not only showing the 'Ferrari plants'", says Hein Desmet of Morel Diffusion when talking about the annual production trials in 's Gravendeel, the Netherlands, which are in full swing at the moment. "Besides being on trial to show our varieties to growers, traders and other professionals industry, it is also an important trial for our breeders to evaluate our new experimentals when they are in 'northern' production. Therefore, it was also important to us to let us continue these trials." Later this month, Morel will organize trials in Frejus, France, where one gets the opportunity to see all varieties and take a look in what's in the breeding pipeline.

In this article is a peek into the trials and what was presented at the production trials in 's Gravendeel. Johan Huisman and Hein Desmet gave FloralDaily a guided tour and presented some of the highlights. 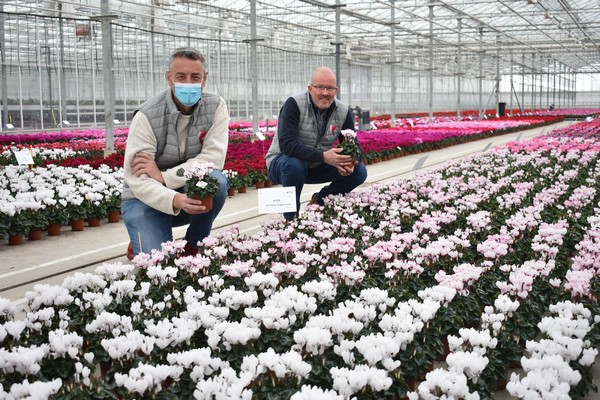 Hein Desmet and Johan Huisman presenting a new Victoria with a Fragrance, an experimental variety that is expected to enter the market soon.

Display - from small to large
The most important species are presented here and also the breeders of Morel will come and take a look at how the future new products are doing under the Dutch conditions, at grower Preesman. The series are presented in the order of size, from small to large. At the moment, they have 6 series; Smartiz, Metis, Tianis, Midi+, Latinia and Halios, which range from mini to maxi flowers and pot sizes. Midi+ is the latest addition to the series and is replacing the 'Premium' series. 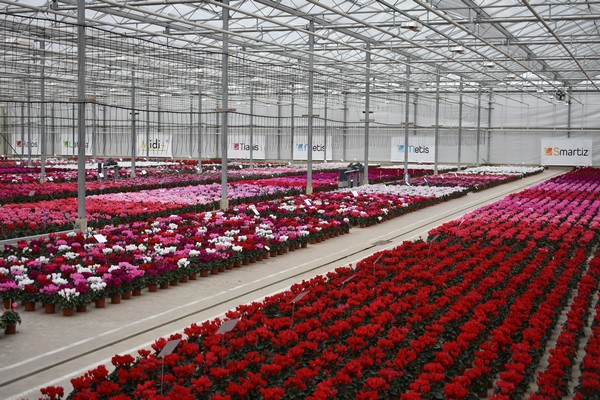 The display, from small (on the right) to large (to the left) series.

Morel is known for their fancy products like cyclamen with fringed, bicoloured, flamed or 'crowned' flowers, but also the intense color of the flowers. However, over the last years, they are increasingly keeping up well with the standard colours in the market, explains Huisman. Rebelle is a good example of a standard colour (red) of which the demand is increasing year by year. 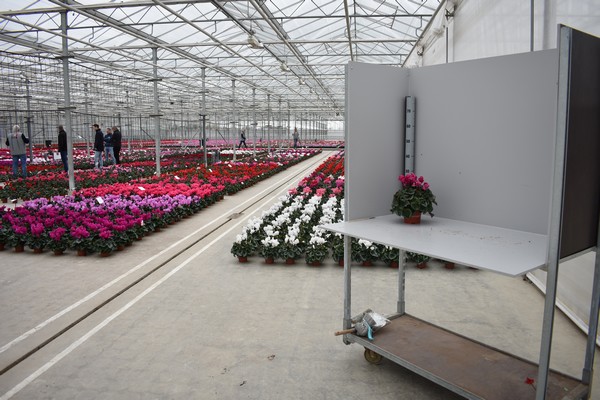 This year, also a photobooth at the trials

Novelties
This year, 8 novelties are added to the assortment, namely Red in Smartiz, Fantasia Artic Red in Metis, Metalis Light pink with eye, Lilibelle Magenta and Lilibelle Bright Purple in the Very Special line and the colours Deep rose, Purple and Bordeaux in the new series Midi+. Below is an overview.

- Midi+
New this year is the Midi+ series. In the past, it was named Premium, but now as it is a renewed and completed series, with 8 colours and a mix that all have the same habit, flowering time and flowering size, the name is changed to Midi+. This middle size flowering series fits between the compact medium type (Tianis) and larger type (Latinia) and is according to Huisman very suitable for retail sales. "This series enables the grower to supply large quantities in a short timeframe."

On top of that, the plant habit is robust, well adapted to heat and very suitable for late growing schedules, and for flowering in short days. The varieties in this series can be used by the consumer indoors as well as outdoors, and outdoors they are remarkably successful. There are 3 new varieties added to this series, see below. 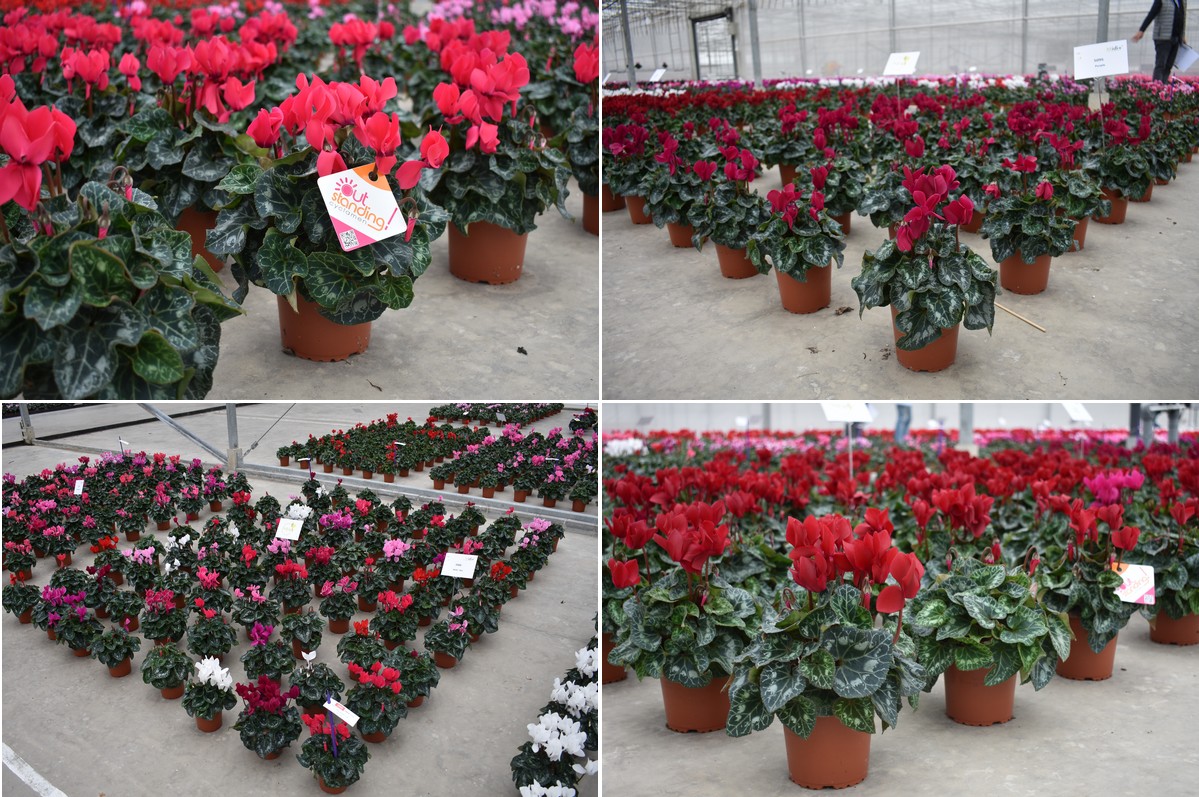 - Metalis
Metalis is known for the thick silver border on the leaves. Also in this series, all color (7 at the moment) are uniform in growth habit. 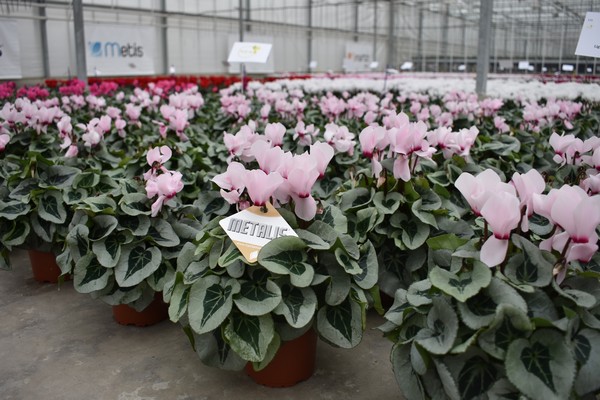 Metalis® Light pink with eye. ""A new color that lights up the series", the catalog says. "A flower with purple eye, pastel-colored, reminiscent of the tones of botanical cyclamen combined with silvery foliage and a very centered bouquet."

Lilibelle® Magenta and Violet. Click here for the enlarged picture. 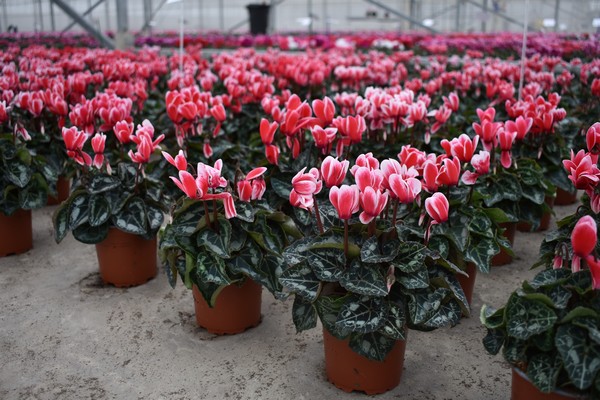 - Smartiz Red
Also in the red, there is continues developments going on. Smartiz Red, for example, is a new mini red that is very compact, easy to grow, homogeneous and extremely floriferous, explains Huisman. 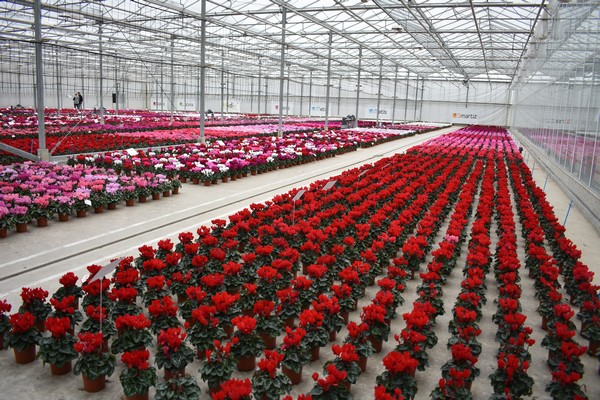 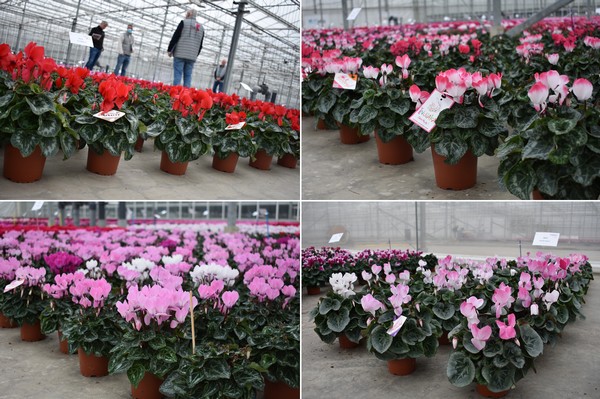 Rebelle is a red variety that was officially added to the assortment two years ago (at the IPM Essen 2019) and is increasing in demand quickly. Another variety that is doing well is Indiaka. It has been introduced three years ago (at IPM Essen 2018) and the petal colors makes it a very unique variety. Among the other interesting existing varieties on display were Blush Intense in the Halios series and Aquarel Rose in the Metis series. Remarkable about this variety (Aquarel Rose) is that it is available for several years now, but that the market seems to discover it again now. "We see the demand for Rose Aquarel increasing." 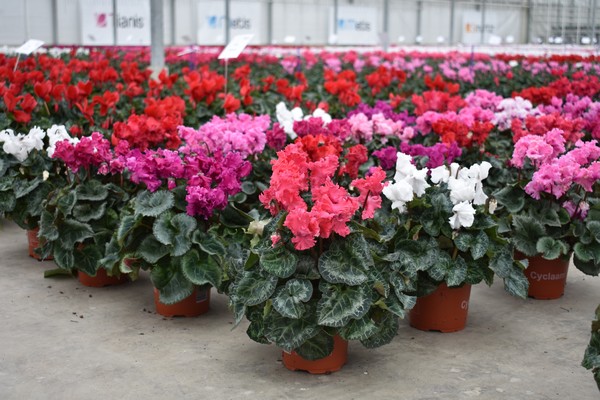 Latinia® Fringed Mix Exp. This is a new mix that is currently being developed in the Latinia® series. It is being presented at the trials for the first time and is according to Huisman a mix with a promising future. 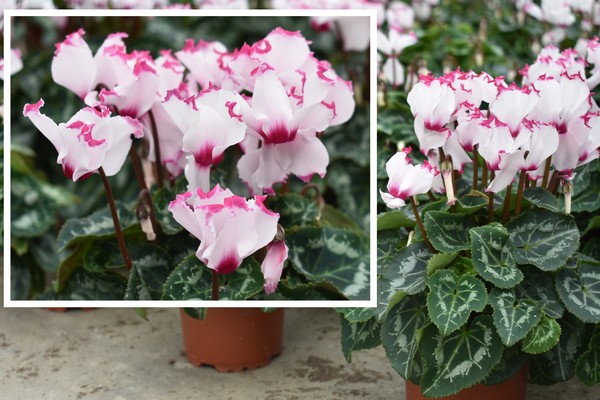 Metis® Victoria Fragrant Exp. This cyclamen has the appearance of Morel's well-known 100% mini Victoria variety that is characterized by its crown. This variety is not only Victoria but also spread a fragrance, a lemon fragrance. According to Desmet and Huisman, the reactions to this experimental variety are very positive and they expect it soon to enter the market commercially. 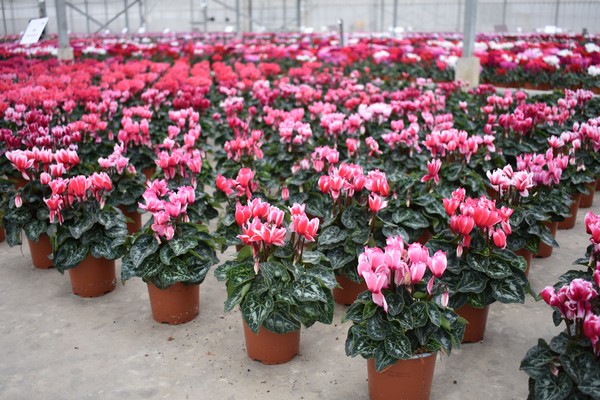 Lilibelle® Salmon exp. is an experimental colour that may be added to the current series that consists of Magenta and Bright Purple.

What you see is what you get
The trials are called Production Trials for a reason. Desmet: "In these trials, we show how all varieties behave when they are in a Dutch production. We show the varieties exactly like they are being produced at Preesman. This also means that there are some off-types in a batch, but we leave them on display, because that's also what our customers may experience. All in all, we want to give our growers a honest view of our assortment, so we do not only present the Ferrari plants." 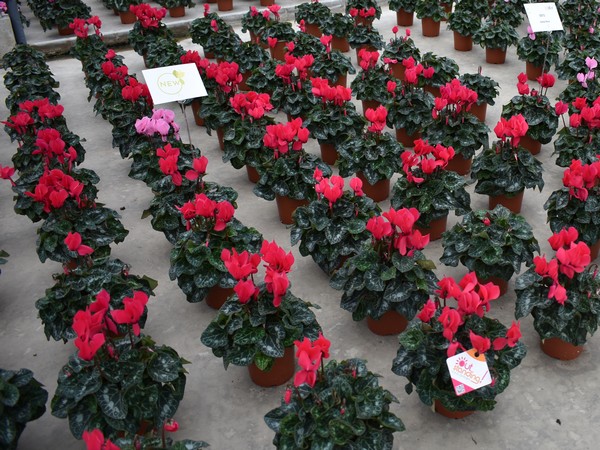 In this line for example, you see an off-type.

Dutch audience
Usually, these trials are being held concurrently with the Royal FloraHolland Trade Fair, enabling many international visitors to come to the showcase. However, this year due to the pandemic, the exhibition in Aalsmeer has been cancelled and combined with the ongoing unrest among the Covid-19 situation, many international visitors decided not to come. Despite that, the Morel team is pleased with the attendance. "When setting up the trials, we knew that there would be a lack of international visitors, so we focused the trials more on presenting the varieties for the Dutch market, like the Smartiz and Metis lines," says Huisman. "The Dutch market is looking for compact, round plants with a lot of small foliage and flowers." 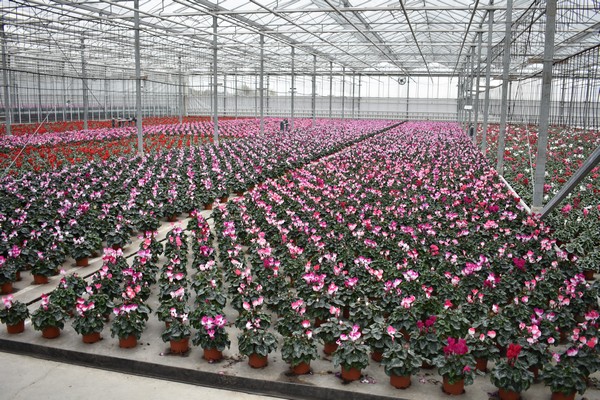 Some of the Morel cyclamen grown for commercial production by Preesman.

Mixes
Besides ordering and growing the varieties separately, growers can also order mixes, besides the existing mixes that Morel offers. "Together with the growers, we will look at the varieties that can be cultivated together. We then make the mix and supply it. Then, the grower only has to order them as a special mix and cultivate them all at once." 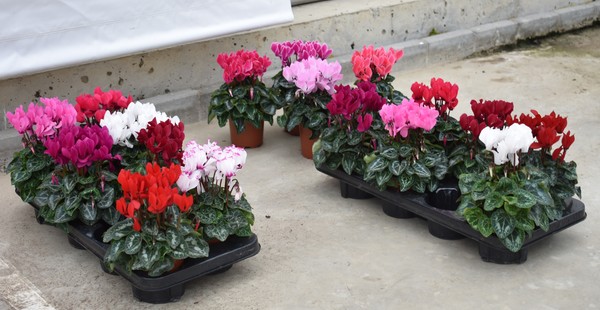 Different mixes being tried out

The year so far and the outlook for 2021
It has been a challenging year for many in the industry, also for Morel. "In France and Italy, we know growers who suffered a lot. Fortunately, most of our growers had a OK year," says Desmet. Also for Morel it turned out to be an OK year and the outlook for 2021 is a little different regarding approach, but positive as well. "We see more that the orders of the growers are based on the orders they receive. This also asks for a different approach from our side."

Trials
The trials in the Netherlands are running until November 6 and the trials in Frejus - France, will run from November 9-13 and 16-20, (9am-5pm).

The trials take place in strict application of the current Covid-19 prevention measures and in compliance with social distancing. For everyone’s safety, visits will only be available on appointment and with a limited number of persons per group. Sanitary protocol and social distancing will be rigorously implemented. Wearing a mask and frequently disinfecting both hands and equipment used will be obligatory.