Funding campaign is in full swing

Ecuador: New alstroemeria farm to be established in Cayambe

A new alstroemeria farm is about to be established in Cayambe. It is an initiative from Santiago Partnership, a non-profit organization that aims to support and empower Ecuadorians. They’ve set up a medical clinic, opened a children's home and did much more to support the community. Now, it is time to help these projects become self-sustainable. They therefore aim to establish an alstroemeria farm. By means of a funding campaign, they hope to take the first steps in realizing the project. The campaign was launched on November 19th and will run till the end of December. Currently, already 33 percent of the costs needed for the alstroemeria initiative has been raised. This is explained by Joel Delp, who together with his wife Kim, came to Ecuador as missionaries and set up the Santiago Partnership. 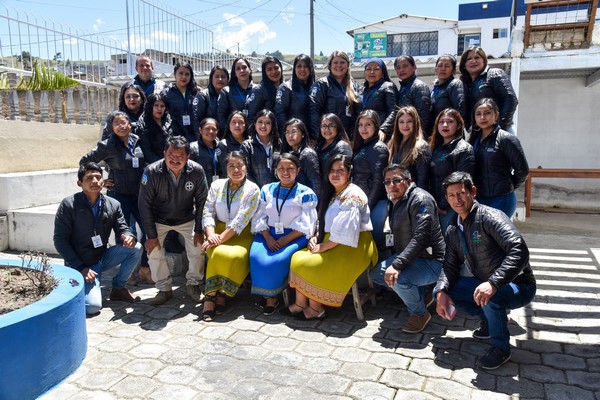 Santiago Partnership
In 2014, they set up the Santiago Partnership. The project in Cayambe started with one employee, Rolando Escola, and has now grown to the current state of having 36 employees on staff as well as receiving some funding from the Ecuadorian government. “Our aim is to empower the Ecuadorians, also the one who is running the Santiago Partnership is an Ecuadorian. We are in Ecuador to support and find funds.” In 2014, they set up a medical clinic (Centro Medico Emanuel) and in 2017 a children's home (Casa Hogar Emanuel). “It is a temporary home for at-risk children and their families who have been abandoned, neglected, abused or have been the victims of Human Trafficking. The home is a temporary place for the children as we work hard to reunify the children with their families after healing has taken place; it is more like a foster home.” In the meantime, they also set up several projects in which the Ecuadorian government is involved. “They helped us to launch our services called the Prevention and Intervention programs. These services are aimed at preventing the need for the children to come to the Home for At-Risk Children, so that one day the Home won't be needed anymore.” 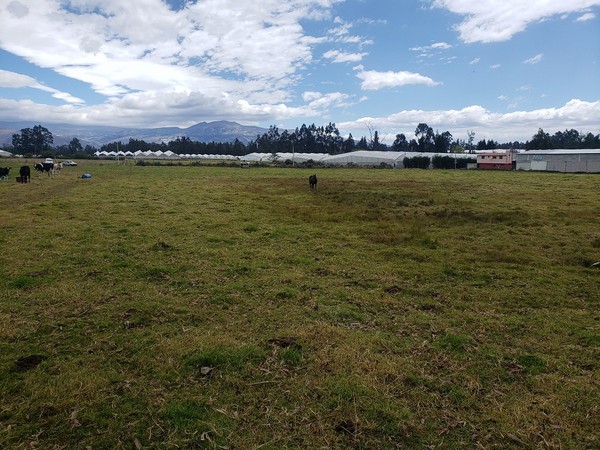 Alstroemeria farm – aim to becoming self-sustainable
So, what is the reason to start up an alstroemeria farm? Joel: “Our goal from the beginning has always been self-sustainability for the project, but since we were starting from scratch, we felt it was important to develop the ministries first. Now, it is time for something to help the project become self-sustainable. We have been producing potatoes and onions for the foster home, and we sell the surplus, but it is far from enough to make the project self-sustainable. Therefore, we decided to look for larger initiatives. Over the years, we have had different ideas, like a chicken farm – that is actually on hold at the moment, a guinea pig farm for consumption (it’s a delicacy here in Ecuador), as well as growing flowers. Growing roses is very common in the Cayambe area, but it is a very fragile flower that requires a lot of labor, and due to the high competition, the margin that is made on their sale is very little. We do not want to compete with the big boys, so we therefore decided to look at a different flower."

They came across alstroemerias. “It is a hardier flower that isn’t as susceptible to disease and requires much less labor to cultivate, thus driving the cost for production down. The idea is to sell the flowers nationally, or to other growers – as the alstroemeria goes perfectly in the rose bouquet - and in the future we hope to even export them internationally.” Their business model will be to start small, produce high quality flowers, and then teach others to grow the alstroemeria flower as well, so that way they can produce more product together to be able to sell at higher quantities, explains Delp. 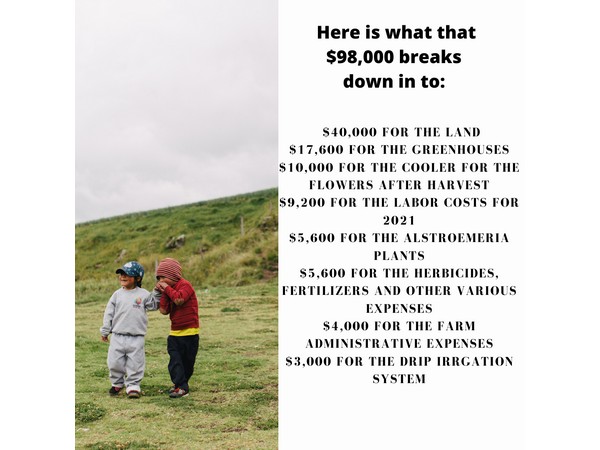 Plan of action
They already found 2 potential plots to build their greenhouses on. However, one does not start a flower farm overnight, and that also goes for the Santiago Partnership. Over the last months, they've talked with several experts in the industry and made a detailed budget planning. “If we only receive the $58,000 needed for the direct start-up costs, we can move forward with this project. However, ideally, we would like to raise the full $98,000 to purchase the land as well so that we will not have to rent land which will lower our margin income.”

The majority of the money is being raised by donations (which will be accepted in any amount but only through the end of the year (ends at midnight on December 31st). On top of the donations, they also partnered with another non-profit organization, Matter, an organization that supports projects like theirs that want to start farms. "They are helping us and sending us a container with material for starting the farm. All other material, we will buy locally. Also, we received a pick-up truck from a church in Illinois, we only need the cooler on top of it."

Currently, since November 19th, 31,903 USD has been raised. Eager to make a donation as well? Click here. (all donations are tax-deductible for the United States taxes. "And you can give with confidence knowing our history and reputation that comes through on our high rating on Guidestar.com as well as our very low U.S. administrative costs of 6%.") The donator will be thanked through a specific reward for your donation.