Agrona's OxyBull aeration system ensures optimum oxygen content in the water and root environment. XL Bloom Youngplants in De Lier has been using the device since March of this year. A strong pump with a capacity of 60 m3/hour blows a lot of air into the water, so there is plenty of movement.

"We believe in a lot of movement in the water. Blowing a lot of air at the bottom of the silo agitates the water. Agrona's OxyBull aeration system does this with the highest hourly capacity. We see that the water in the silo really starts to churn", says Michel van Rijn, CEO of XL Bloom Youngplants. 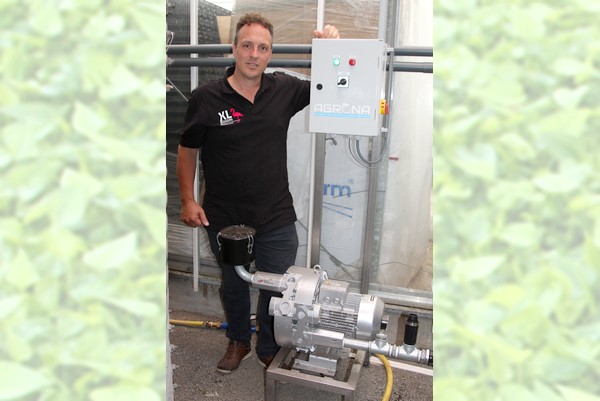 The company produces 11 million anthurium cuttings in 4 European laboratories each year and exports them to 53 countries worldwide. “We want 100% organic production, and to be up-to-date with biostimulants.” The OxyBull aeration system provides a healthy and lively crop, which makes cultivation easier.

The grower analyzed the water before installing the OxyBull aeration system. It contained 25 fungi. "We always have to deal with fungi in the return water. After using the aeration system, no fungi were found when the water was analyzed a second time."

Positive effects
The anthurium grower also notices that the hair roots of the young plants have improved, allowing them to better absorb nutrients. "More oxygen leads to more roots, and therefore more sprouting. This means we achieve higher quality."

He finds it striking that the capacity of the UV disinfection system has doubled because of the aeration since the water is clearer. "We went from 3 to 6 m3/hour per system. Enough reason to want an OxyBull aeration system!"

Growers who are interested, and want to see the performance and results of the OxyBull aeration system can make an appointment with Michel van Rijn. "Because sharing knowledge, means that you will also receive good feedback."