"We have been cultivating saffron in Belgium for 11 years"

Halfway between Brussels and Liège, not far from the city of Namur, we find the only professional saffron farm in Belgium, called "Le Safran de Cotchia". The idea of cultivating saffron in Belgium was a gamble of Eric Léonard and his wife, motivated partly by a need to "go back to basics" by working the land. But the farm's history did not begin with the cultivation of this coveted flower, known as red gold. It is the current chapter of a life in which entrepreneurship and love for the land have always been closely linked.

An entrepreneurial spirit
It all began in 1985, when Eric Leonard and his brother took over their father's farm, which covered approximately 145 hectares. "At the time, we were growing traditional crops, such as beets and corn. The first CAP reform quickly led us to set part of our fields aside. My brother and I decided to continue to cultivate our land, even if it prevented us from having access to the premiums. That's when the farm experienced its first diversification, because on those 25 hectares set aside for fallow, we decided to plant blackcurrant. Many people considered us crazy at the time. However, it was a successful gamble, until the fall of the Berlin Wall in 1989, which drastically reduced prices. From 40 Belgian Francs per kilo, we then went down to 4 Belgian Francs. It was our first big blow," says Eric Léonard.

After that, the producer decided to embark on a completely different project: to create the first on-farm butchery in Belgium. "At the time, I met my wife, who was trained as a butcher and caterer. Soon, our business grew. We had employees and the butchery was a great success. However, after 19 years of that, we wanted a change and to go back to the land, which we were missing more and more. It was after watching a program about a saffron farm in France that 3 days later, we went there to learn more about it. Afterwards, we brought 1,500 bulbs back to our farm. Although this first attempt was only moderately good, we decided to give up the butcher's shop to start growing saffron in 2009. Once again, we may have been considered fools." 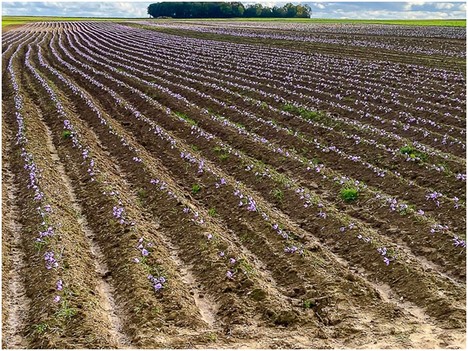 Saffron: a sustainable crop with 100% manual labor
The first year, Mr. and Mrs. Leonard brought 150,000 bulbs back to their farm. 11 years later, they were cultivating about 600,000 of them on 2.8 hectares. "The bulbs are normally planted in August. They then flower in October/November. Currently, we are at the end of the flowering period. The leaves then come out and are dried out in April/May. Then, the bulb is multiplied for another flowering in October. In order to prevent the development of diseases, we recommend replanting the bulbs every 3-4 years."

Saffron does not require any phytosanitary products: "If the soil is sufficiently balanced, there is no need to add inputs. As far as insecticides are concerned, saffron is currently free of pests. We cannot use herbicides, as they would take a toll on the development of the flower. The weeding is first done through thermal burns, and now we are moving on to mechanical weeding. It is important to know that in a saffron farm, everything is done manually or mechanically. Although the ideal soil for the crop is an aerated one with limestone that is easily irrigated, we cultivate the flower on a very heavy, very wet and silty soil, so we can say that saffron adapts to any soil. And we have achieved this by adapting the cultivation techniques to the conditions of the Belgian soil."

Saffron in Belgium: a product with a still underdeveloped market
Although saffron products have now found their market, Eric Léonard has had to redouble his efforts and bet on innovation to develop his clientele. "Unlike other crops, there is no saffron sector. Saffron growers will therefore have to develop their own customer portfolios. And to do that, in addition to being a good producer, you have to be a good salesperson. Although most of our customers today are renowned chefs and bistros, we had to introduce saffron in Belgium, which was not really known by professionals at the time. It took a huge effort."

"Moreover, it is difficult to make a living from saffron production alone, so we diversified with the development of a range of derived products such as jams and mustard, as saffron is a formidable flavor enhancer.

Mr. and Mrs. Léonard also seek to promote the use of saffron in the paramedical sector. "Saffron is a very good relaxant. Personally, I use it to help me sleep and it is very effective.

A year complicated by the consequences of the health crisis
Besides selling its products in Belgium and exporting bulbs, the company also makes some income by offering visits to the saffron farm. "Normally, the equivalent of 2 coaches per week visit the saffron farm. Due to Covid-19, we have barely had 2 or 3 coaches since the beginning of the year. This represents a significant loss of turnover. The closure of restaurants for 3 months in Belgium has also caused us to lose 22% of our turnover. Moreover, we fear that the situation will affect us even more during the holiday season, as a large share of our sales is usually carried out in Christmas markets. In order to cut costs, we have started producing on a day-to-day basis, adapting to the demand.

Safran de Cotchia also offers training courses. To date, 90 people have been trained in the saffron trade. It is also possible for private individuals to find the farm's products online.

Belgian and French saffron: very different from Moroccan and Iranian saffron
Although saffron cultivation does not originate in France and Belgium, these origins have everything needed to appeal to professionals and consumers. "Belgian or French saffron is very different from Iranian or Moroccan saffron. On our farms, the flower's pistils are much longer and thicker. It takes about 150 flowers to obtain 1g of saffron in Belgium/France, while 250-300 are needed in Iran and Morocco. Last year, we had a yield of 3 kilos of saffron from 1.8 hectares. Of course, this figure is subject to change, depending on the weather conditions, but in theory, we can count on 1 to 1.5 kilos being produced per hectare. Iranian and Moroccan saffron is spicier, more piquant, while Belgian and French saffron has much more aroma.

The French and Belgian production can be sold for about 34,000 Euro per kilo, or 34 Euro per gram. "The production from southern countries is sold at much lower prices, since the labor force is often family-based and therefore cheaper, and this is a major competitive factor."

Eric Léonard is also investing a lot in educating and raising the awareness of professionals and individuals about saffron cultivation. "On the market, 80% of saffron is fraudulent. There is a lot of fake saffron in circulation and we explain how to avoid being cheated. A simple little test is to take a pistil between your fingers, wet it and then roll it. If your fingers turn yellow, it is indeed saffron!"