"This chrysanthemum is white as snow and it really shows when putting it next to other white varieties. Furthermore, it has a very green heart, a lot of volume, it's very uniform, easy to dye, and very durable, allowing it to be transported over long distances".

This is what Ilonka Ekelmans of Kwekerij Sensation says about the new spray chrysanthemum from Dümmen Orange's single-flower segment. After they stopped with Bacardi in 2016, they started looking for a new single white chrysanthemum. Two years ago, they saw this white chrysanthemum, which was still a code at the time, and started testing this variety. In week 38 of this year, Ilonka was officially introduced and cultivation of this chrysanthemum started. So far, Ilonka is very satisfied with the demand, which almost exceeds the supply, and she has high expectations for the future. 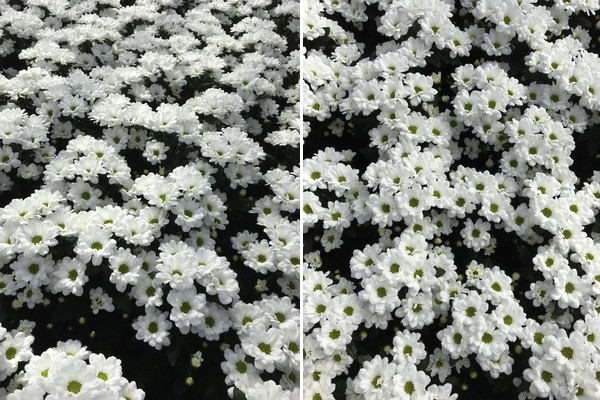 Namesakes, a coincidence?
The name of this new variety is Ilonka, spelled and pronounced the same way as the first name of Ilonka Ekelmans; is this a coincidence? "It's true that the variety is named after me," says Ilonka. "Some representatives of Dümmen Orange came by to brainstorm about the name. We came up with some suggestions and some names were already being used. I am always busy at the nursery but occasionally, I also do some work for Dümmen Orange, so at one point one of the representatives said: 'Why don't we call the variety Ilonka?' It ended up becoming the name, especially because it is a name that is easy to pronounce and used internationally (Eastern Europe: Poland, Russia, Hungary, etc.)".

More than half of the acreage is Ilonka
Kwekerij Sensation's greenhouses are 4.6 ha. They cultivate Ilonka on 2.6 ha and Pina Colada on 2 ha, both are varieties of Dümmen Orange. "For us, it's ideal to cultivate one variety in each greenhouse, it works much easier and is more efficient".