Scabious as a cut flower for the UK market

Scabious are well established as a garden plant, but apart from the outdoor production of traditional perennial varieties they have not been grown as a commercial cut flower in the UK. Trials undertaken at the Cut Flower Centre (CFC) from 2015 through to 2019 have assessed the potential of two new series of cutting-raised Scabious which have been specifically bred for cut flower production. 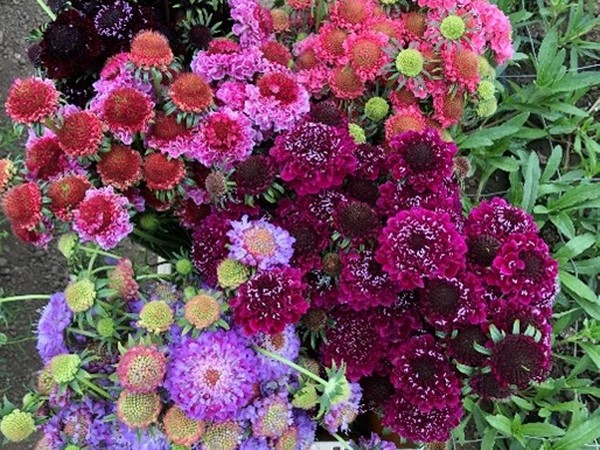 Varieties trialled
The ‘Scoop’ series, marketed by Danziger, includes a wide range of vibrant colours, primarily shades of pink, lavender, red and purple as well as pure white. They all have very similar characteristics in terms of plant growth and the same ‘pincushion’ flower form. The ‘Maestro’ series, marketed by HilverdaFlorist, have different characteristics, with some having ‘pincushion’ flowers while others are more akin to the traditional perennial Scabious, but with a similar range of flower colours.

Cultural details
CFC and grower trials have demonstrated that these new series of Scabious can be grown outdoors, under polythene tunnels and in heated or unheated glasshouses. The planting density recommended is 6-8 plants/m2 and all of the CFC trials were planted through standard eight inch square wires in two rows of four plants per metre run of bed. Planting date appears to be crucial, plants need to be established and well branched before warmer weather commences in late spring or early summer. To maximise the cropping potential plugs should be planted as early as possible, no later than week 15. For later plantings, it is good practice to transplant the plugs into a larger module, pinch two or three weeks later and then plant into beds as a larger, well branched plant.

Plug plants may appear slow to establish, this is because they develop a root system prior to any shoot activity. After three to four weeks, plants should be pinched to four or five leaves in order to generate a good framework of shoots. A second pinch shouldn’t be necessary unless weather induced premature budding results. Following pinching, plants develop quite slowly for about four weeks after which time growth becomes vigorous. The support wire should be raised regularly to ensure the production of straight stems and to keep the beds tidy.

Flowering time will depend on planting date and the prevailing weather conditions, but as a general rule, crops grown from plugs plants will start to flower ten to twelve weeks after planting.

Trials have indicated that both series are generally resilient in terms of pests and diseases. However, in warmer weather, two-spotted spider mites can become problematic requiring a protectant spray programme. Other potential pests, such as thrips and aphids, should be monitored and treated for accordingly. Downy mildew has also been noted and a spray programme should be implemented during periods of high risk weather conditions.

Some varieties have developed chlorotic and necrotic leaf mottling at certain stages of growth and currently it is not known whether this is a nutritional issue or a physiological response.

While Scabious are perennials, the recommendation is that these new series are grown as annuals. Both CFC and grower trials have examined the potential of overwintering plants, but only with variable levels of success.

Harvesting
Once in full flush, flower stem production is hugely prolific and during warm weather crops require harvesting at least once a day. In order to maximise vase life, the recommendation is to harvest the flowers when the first whorl of petals is fully open. For direct sales however, it may be more desirable to harvest when the flower is slightly more advanced to provide a greater visual impact.

The flower stems can be harvested as a single bloom, cut to the top of the next side shoot, or as a spray which will include one or more of the lower side shoots. The first method will produce a larger yield of product with shorter stems (with some varieties a large percentage may be less than 45cm), whereas the second method enables the stems to be cut to whatever length is required, but a lower yield will be achieved. As a result of the two harvesting methods and differences between varieties, it is difficult to provide definitive yield figures, but the range is between 25-35 flower stems/plant (200-280 stems/m2 of growing bed). The Danziger ‘Scoop’ series produced consistently stronger stems than the HilverdaFlorist range in trials, with latest range of ‘Focal Scoop’ producing the strongest and longest stems of all.

Owing to the constant flower flushes, dense growth habit and variable stem length, harvesting is very labour intensive and hence costly, with some growers estimating costs between 6-10p/stem. When assessing the economics of this crop, growers must take this into account in order to ensure that the sale price per stem reflects the full cost of production.

Hot weather can result in flower stems that are short and weak due to the number generated. In this instance the crop can be cut back to around 12cm above ground level and within six to eight weeks the plants will be reinvigorated, giving a good quality autumn flush of flower stems. During the four years of CFC trials, crops were still in flush when the Spanish tunnel was de-skinned during October or November, plants in some of the grower trials in glasshouses have continued to crop into December.

Product vase life
Extensive vase life testing has been undertaken over the four years of trials using various post-harvest treatments and all have demonstrated that there are no issues associated with this crop. In 2016 the vase life tests using water treated with either ‘RVB Clear’ or ‘CVBN’ resulted in flower stems which were still in an acceptable condition on day seven of vase life. Feedback indicated the stems were robust, easy to handle, and did not appear to have complicated post-harvest requirements. In subsequent years, treatment with ‘Floralife Express 300’ or ‘Chrysal Clear Professional’ as the transit solution and ‘Floralife Express 300 Universal’ flower food in the vase produced a minimum of a seven day vase life up to 10-12 days.

Market potential
Four years of CFC and grower trialling have shown that the two new series of Scabious (especially the ‘Scoop’ series) have good market potential and are popular with consumers. The positive attributes of the crop include a unique flower form, vibrant colours, high yield and a consistently good vase life. However, the growth habit and flowering of the crop means that harvesting costs are an issue and unless this is reflected in the final stem price, the large-scale production of Scabious will not be economically viable. Currently the crop is only being grown on a small scale in the UK by growers that are supplying premium markets or via direct sales to the public.