Congestions at the UK border

"We want to be home before Christmas"

Due to the contagious coronavirus mutation in the UK, Europe closed its borders with the UK. Other nations also announced or are considering to stop flights to this country, explains UK flower importer Simon Russel of Sunflora. 90 percent of their imported products comes from outside the EU, but fortunately, their last flights with Christmas products were in last weekend, just in time. On the road, however, the situation is still chaotic, explains Cecile Duval of Les pépinières de France (a group of 9 French growers of young and finished plants specialized in trees, shrubs and climbers), with trucks that cannot cross the border. 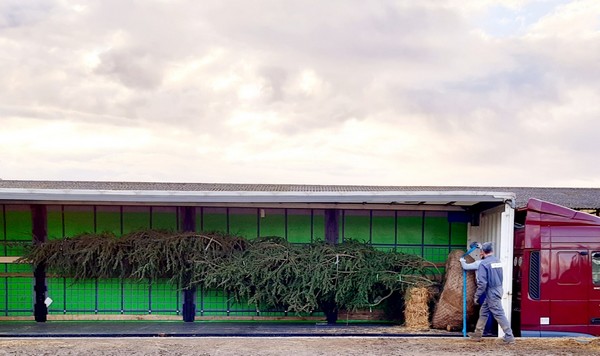 Cedrus being loaded in the truck

Going in, but not out?
Duval explains that she has a truck with 2 cedrus trees of 10 to 11 meters tall near Calais that cannot cross the border. "And when it will be re-opened, the carrier does not want to send drivers to the UK as they are scared that they cannot come back. I think we will stock the cedrus here in a nursery in the north of France then."

For more than 24 hours, the border between France and the UK is closed. Yesterday, the amount of parked trucks at the entrance road to the port of Dover was 945 and it is expected that this number will increase even further if the situation does not change. Other sources even report 1500 trucks that are stuck in the region of Kent (Folkstone and Dover).

Journalist spoke to the truck drivers and almost everyone said the same. "We want to be home before Christmas."

Air movement
Also outside Europe, more nations are considering to stop flying to the UK. Sunflora, for example, imports a lot of their foliage from Sri Lanka and today, they've heard that this country will stop flying to the UK from tomorrow on. And for how long is still unknown. Sunflora also receives a lot of flowers from African and South American countries, and also in these countries, they heard that they might stop their flights to the UK. So far, Sunflora has not been affected. "Our last flights were in last weekend, just in time for Christmas. For the coming week and weeks, we may be affected more as our next flights are planned to come in next weekend."

UK and France aim to restart freight
The French and British governments seem to have reached an agreement to restart freight traffic between England and France. The borders were closed this week, allegedly because of the presence of additional contagious new variant of the coronavirus. The BBC reported this this morning based on sources within the French government. However, the details are not yet known. Earlier Johnson also came up with the plan test all truck drivers who want to return to mainland Europe. Those who are negative are allowed to leave. Whether this plan is part of the agreement is not yet entirely clear. TLN reported on its site that the blockade from England to France will be lifted as of tomorrow December 23rd. This corresponds to the established 48-hour blockade unilaterally announced by the French government, which will end today in the late evening hours.

Mutated variant COVID-19
This weekend, an increasing number of European countries banned travellers entering from the United Kingdom. On Sunday ferries were also stopped for passengers and the Eurotunnel closed for 48 hours. The move was made after the UK recorded 35,928 new cases of coronavirus on Sunday, more than double the amount recorded seven days previously; this is said to be due to a mutated variant of the virus having arisen which is said to be up to 70% more contagious.