The new member is a committee integrated by the principal plants and flowers organisations of Mexico, including Mexican Flower Council, the State of Morelos Council of Ornamental Producers, Palacio de la Flor in Xochimilco, Floriculture Association of Villa Guerrero and the Cactus Union Producers of Querétaro.

OPF President, Enrique Arias Velazco, is appreciative in becoming a member, adding: “In Mexico, without a doubt, daily life cannot be conceived without plants and flowers they are part of our language. We celebrate the milestones of life’s joys and death with flowers, as in the Day of the Dead, so as you can see, our relationship with flowers is strong.

“We feel very honoured to be representing our horti-floricultural sector because we know that we are representing thousands of producers and millions of people who work in this sector. So we are going to strengthen relationships with other associations to benefit local producers and developers of new technologies for the industry in order to make the world take notice of Mexico and support the development of this sector in this country.”

The estimated value of national production of flowers/ornamental plants in Mexico is €1,664,000,000. Most of the producers are in the states of Mexico, Puebla, Morelos and Veracruz, and Mexico City. In total, nationwide, there are 23,088 hectares of ornamental crops cultivated; and 25,500 producers of cut flowers and foliage and container plants; the industry also generates 188 thousand permanent jobs, 50 thousand temporary ones and more than one million indirect ones.

The USA is the largest consumer market for Mexican ornamental, horticultural and floricultural products. Trade is growing, making Mexico the second-largest exporter after China to North America.

Internationally, OPF Mexico has excellent relationships with German and Dutch embassies in Mexico and the International Dutch Chamber of Commerce in Mexico known as Holland House Mexico. It also has free trade agreements between the European Union and Mexico that facilitate and enhance the bilateral market.

In 2019, OPF Mexico began its first international ornamental floriculture trade show, after partnering with IPM Essen, to generate networking and trade opportunities for its members and producers nationally and internationally.

OPF Mexico 2021 will be a great platform to showcase the Latin American producers and the global value chain. The event’s focus will be on four speciality areas: Plants and Flowers, Technology and Innovation, Floristry and Decoration, Gardening and Landscaping. 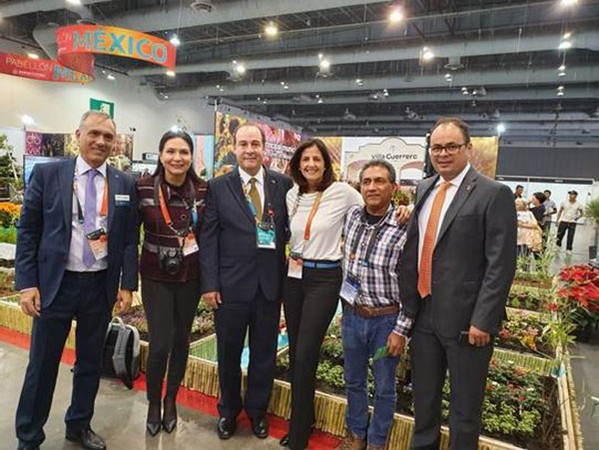 Arias says, “By facilitating this event we are linking the main associations with a cross-sectional representation. We are supporting our members on issues such as commercial training, social responsibility, and giving them different strategies to connect with the various actors in the production chain and with all the suppliers for producers. We are also active with the marketing, promotion and consumption of Mexican plants and flowers.”

OPF Mexico trade show invites a special focus on an international country. In 2019, it was Germany, and for 2021 it will be the Netherlands.

Arias says, “We are going to have a special section for Dutch exhibitors, as well as making forums about the latest novelties of Dutch ornamental floriculture sector. For this edition, the flower named “Dalia” (dahlia), which is the Mexican national flower is going to be the central decoration theme of this event.”

OPF Mexico offers three important conferences at this event. The Green City International Forum will be a space to establish direct communication between experts in urban planning, landscape architecture and sustainability with the governments.

Arias says, “This session will allow stakeholders to showcase the positive importance of our human relationship with trees and plants in particular aspects such as health, social cohesion, security, less vandalism, and all-round better quality of life.”

The other event will be a Creation Master competition. This contest will be a live on-stage floral demonstration for florists to demonstrate their talents, allowing the viewer to observe and learn from the best.

The third event is the Horti Innovation training to show producers how to improve their crops, increase their profitability, and reach a better world market position. At the same time companies interested in sharing their technological innovations will meet potential customers. 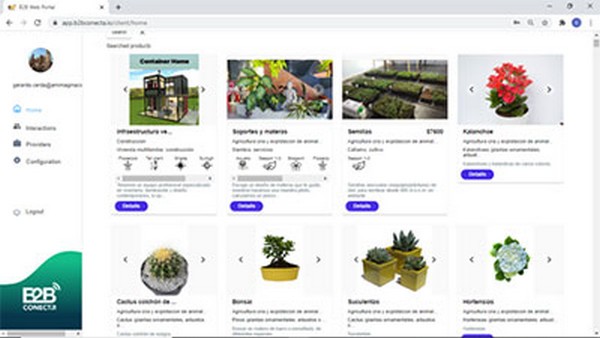 New digital connections with e-B2B Connecta
It is not only the trade show which OPF Mexico uses to connect their audience of producers with the global supply chain. They also have a digital platform – e-B2B Connecta, which gives an immediate connection for all participants in the green sector.

IT manager, Gerardo Martin Cerda Ortiz, says its launch has come at such a critical time. “Before the coronavirus pandemic, Latin American horticultural producers would travel on business, they would never have thought about conducting business on a virtual platform. But this year, with the lockdowns preventing movement, many producers found a market on e-B2B Connecta. It makes it easy to facilitate business encounters between clients and providers by locating customers through digitally displayed products. Once a customer shows interest in a specific product, they simply click on its Contact the Producer button, and the business process begins. The parties involved can now generate conversations through an internal chat, send emails, and schedule virtual meetings within the platform itself.”

There are two types of users: clients or purchasers. For a client, access is entirely free. They have access to a broad portfolio of suppliers listed by sector and positioned according to their certifications and services. The customer has access to the supplier’s details once they have requested product’s information.

The platform allows visitors to search products by their names, by countries (where you can see all the variety of flowers and plants in a particular country) or by sector and speciality area, such as plants and flowers, landscaping, gardening, floral design. The searches have georeferencing locations with Google Maps and virtual meetings, are handled thanks to the Google Meets platform.

The platform earns money by asking providers for an annual quotation fee that starts from $197 to $545, dependent on the number of products they want to exhibit and if they are National (non-exporters) or International (exporters) members. The platform is for wholesale trades, which means that they can recover the fee’s investment with just one successful business.

For providers and suppliers to use the platform, it is intuitive with a Product Creation menu, with recognisable sections, where you can collate general specifications, lengths, and particular indications for every product and the sale conditions of the product.

“This is the only intervention provided because unlike the Dutch auction clocks, the providers are free to add the market price that they wish to their variety of products; e-B2B Connecta does not make those regulations.”

The e-B2B Connecta platform and websites function in Spanish and English. However, there are plans in the future to translate into other languages.

The success of such a trade system is highly dependent on good logistics. The e-B2B Connecta platform has the best tools currently available in the market for its administration. The registration forms and databases align and conform to international and European data protection regulations. The platform is supported by AWS (Amazon Web Services) services that sustain all the platform’s security and functionality and the safe storage of databases in a platform named Mongo DB Atlae. This data storage is the one used by the British government to protect its sovereign information. Virtual transactions happen on the secure payment portal Stripe, which is known as the safest in the world; and, used by many companies around the globe such as Uber, Amazon, Allianz.

As e-B2B Connecta is OPF Mexico’s official digital platform, it means that all the exhibitors at OPF Mexico 2021 will be able to use it. Exhibitors can use it to get in touch with visitors during the event and throughout the year, which for many Mexican producers will help increase the visibility of their products to a broader audience.