The remarkable potential of cattail cultivation

It is a plant everybody knows and which has many (potential) applications, but which no one is growing: cattail. This might sound experimental, but in the Dutch city De Peel, Janke van Dijk has concluded the first trial round successfully. For the next year, yield has increased and there are serious talks with several customers. 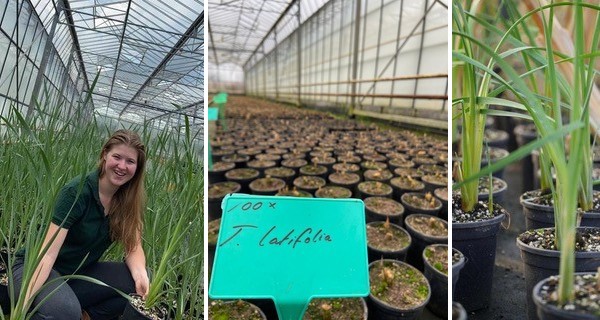 Janke in between her plants

Cattail (UK: Reed mace) is a so-called helophyte, a type of water plant which can be found in the entire country and which can immediately be recognized by the 'cigar'. The plant retains a lot of water, which makes it an excellent buffer plant in dry areas. Cattail also purifies the water, because the aerobe bacteria thrive around the roots. In so-called nature-inclusive agriculture, it can be very useful at the border between agricultural ground and nature areas. Or think of a waste purification installation, where the roots can filter nitrates and phosphates out of the water. Exactly those parties - water boards, Staatsbosbeheer, water purification companies - have contacted Janke, although private customers are also welcome.

Cattail grows in two different ways: by means of seeds and by means of cutting the root stems. "I have opted to apply both breeding techniques to spread the risk. When only breeding with root stems, there is a large risk of virus transfer because the DNA of the daughter plants is the same as the mother plant." 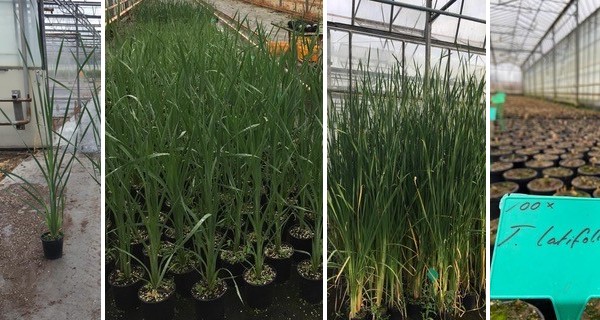 Wet cultivation
The plants are grown in the greenhouse for practical reasons. Janke's father grows blue berries. He had some space left in his greenhouse that his daughter could use. Janke's green thumb runs in the family, and the required theoretical knowledge and ideas were gained during her study Horticulture and Cultivation. "I did a graduate project with Waterschap de Dommel, in which water purification in the buffer zone between agricultural land and nature areas was one of the subject. I was introduced to the phenomena of 'wet cultivation' or 'paludiculture' (paludi means march in Latin). Cattail came forward as an interesting option".

Starting
At the moment, nothing much is happening in the greenhouse. The plants have been cut and are hibernating. Last fall was a matter of starting and testing - how certain are the sales, what to pay attention to, what are the problem points? Janke had to make sure that the plants, which can grow very fast, are always with the roots in the water. Now the test phase has been completed successfully, Janke will really start this year.

Note: There are more (experimental) applications for cattails. The strong fibers can possible be used in construction and for isolation, and almost all components are edible. Left and right, the dwarf variety (small reed mace), a plant which proliferates less than its big brother.