Flower shipments from Colombia have increased significantly over the last few years, and the trend continues in 2021. So far this year, PortMiami has processed a record number of flowers for Valentine’s Day. Miami-Dade County is a key Gateway for flowers from Colombia for Florida residents, as well as for millions of Americans across the USA.

"The significant increases in flower imports via ocean transportation to Miami demonstrate that importers consider PortMiami as their preferred gateway. The reason that Miami-Dade County attracts flowers from across South America is due to the fact that we have an abundance of cold storage warehouses and the most experienced flower worker in the industry – we are a magnet for imported flowers arriving both by air at MIA and by sea."

Majority of the flowers from Colombia
Although flowers enter PortMiami from a variety of countries, Colombia contributes, the largest share of flowers that enter into PortMiami. The most important flower varieties imported from Colomnbia to PortMiami are roses, followed by chrysanthemums, mixed bouquets, alstroemeria or lilies of the incas and Dianthus or Carnations.

According to Seaboard Marine, the majority of the flowers come out of the Sabana de Bogota and Medellin regions, with Bogota being the dominant region due to its altitude and cooler conditions for the flowers. Empty refrigerated containers are sent via truck to various floral packing houses in the Bogota and Medellin regions, and then to Santa Marta and Barranquilla on the Caribbean coast. Santa Marta receives about 95% of all the flowers, followed by Barranquilla, Colombia with about 5%. Upon arrival at PortMiami, flowers are sent to refrigerated warehouse, where they are unloaded and inspected without breaking the cold chain. From there, flower bouquets are sent to markets across Florida and to the entire United States. Seaboard Marine has established an express service from Colombia to Miami which has helped us increase our flower imports exponentially (see below). 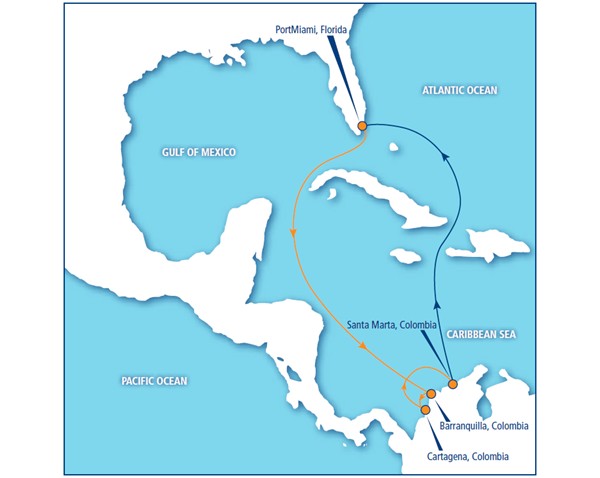 Although ocean transport may require a bit more planning, it is significantly less expensive (less than 50 %) when compared to air shipments. Also, since the cold chain is never broken from farm to shelf, the flowers arrive in top condition via ocean transport. In the years to come PortMiami and Seaboard Marine expect the shipments of flowers to grow at an ever-increasing pace. Working with our federal partners at Customs and Boarder Protection (CBP) and the United States Department of Agriculture are prepared to handle an increase in flower imports via ocean transportation.