Implementation of the Water Framework Directive in 2018 imposed limits to Dutch growers for discharging drain water into sewers and surface water. But, as the amount of sodium will build up, constant recirculation of irrigation water is simply not an option. An issue that is also increasingly occurring across borders. "In the last two summers, this was compromising the quality of our crops," says Koen Saris, operations manager of Wijnen Square Crops. Having had positive experiences with one Poseidon system of Moor Filtertechniek (part of Van der Ende Groep), this sweet pepper and cucumber grower of Grubbenvorst in the Netherlands added two more units. The Poseidon water treatment system effectively eliminates sodium, while retaining valuable nutrients. 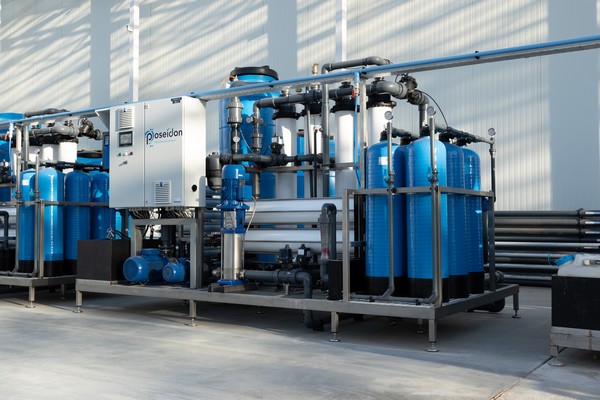 Increasingly stringent measures relating to the discharge of drain water are not just for Dutch growers. Also internationally, systems like the Poseidon are a relevant and interesting investment and therefore demand has grown rapidly. The water treatment system made its debut at Wijnen Square Crops in 2018. "We use spring water at one of our sweet pepper locations. It doesn’t have a particularly high concentration of sodium, but the new laws and regulations for re-using water mean that the sodium concentration accumulates during the season. We therefore bought a Poseidon," explains operations manager Koen Saris.

Different rainfall pattern
The company has three locations – two 11-hectare and one 10-hectare – and initially they all took turns with the one Poseidon system. "Based on the water analysis, we moved the system to the location where it was needed. The capacity should have been sufficient, but we’ve noticed over the last few years that the quantity of rainwater has changed. There’s less rainfall and when it does actually rain, it falls in short periods. This meant we didn’t always have enough rainwater available. We started using more spring water, but the sodium isn’t absorbed by the plants, so it builds up and the sodium level of the water increases. We had high sodium levels the last two summers, and it was compromising production and the quality of our crops."

Extracting sodium at minimum cost
That was when Wijnen Square Crops decided that each of the three locations should have its own Poseidon with sufficient capacity. The system uses several different techniques to purify water: ultrafiltration, nanofiltration, reverse osmosis and active carbon. It also has a paper belt filter to remove the first ‘coarse’ contaminants. And a Poseidon not only extracts sodium at minimum cost: its capacity can also be tailored specifically for each customer.

Hybrid system
The Poseidon has an additional function at Wijnen Square Crops: it is no longer used exclusively as a water treatment system, but also as a disinfection system. To fulfil this function, the three Poseidons have been equipped with the in-house developed disinfection technology of Moor Filtertechniek. Thanks to the addition of ultrafiltration, the Poseidon now also eliminates bacteria, fungi and viruses. Koen Saris is pleased with the hybrid solution: "We already had a UV disinfection system at one of our sites. However, it hadn’t been working properly, so we switched if off and didn’t use it any more. We have an ozone system as well, but the Poseidon’s operating costs are a bit lower. So the Poseidon also has financial advantages."