Calibrachoa is an ornamental plant with high potential and commercial development, because its varieties stand out due the different shapes and colors of their flowers that make them attractive for use in pots and beds.

Currently, the Floriculture Institute of the National Institute of Agricultural Technology (Buenos Aires, Argentina) has a program for the genetic improvement of ornamental varieties using native plants, which has as a fundamental requirement the obtaining of an efficient and reproducible method of plant regeneration that also guarantees plant health. This is because the materials obtained are multiplied agamically, which can contribute to the transmission of systemic diseases that affect the quality and yield of the crops. 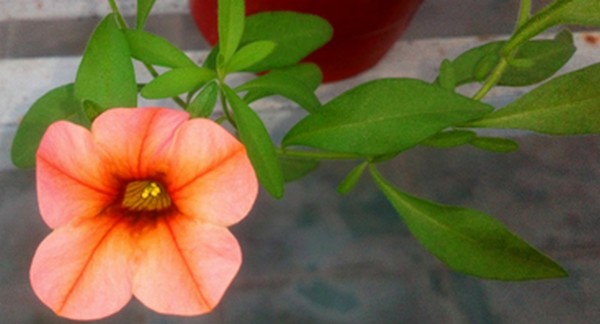 Thus, the present study had the objective TO develop an efficient protocol to the micropropagation of Calibrachoa var. Pampa Salmon INTA using apical meristems.

The research was carried out comparing the effects produced on the regeneration of complete seedlings, growth, callus production, mortality and ex vitro survival of plants through the addition of different doses of growth regulators (kinetin, acid naphthaleneacetic, 6-benzylaminopurine -BAP- and indole butyric acid) to the MS culture medium (Murashige & Skoog) with the concentration of its macronutrients reduced by half (MS ½).

Data analysis was performed using the chi-square variance contrast test for most of the variables, and ANOVA and DGC (Di Rienzo, Guzman and Casanoves) for the variables aerial and radical growth.

The results show that the combination of MS ½ + 0,01 mg L-1 BAP resulted in obtaining a high percentage of whole plant regeneration, higher aerial and radical production and, therefore, a high plant survival rate after their transfer to the greenhouse.