"We achieve better uniform protection and a better greenhouse climate"

On hot days the temperature in the Bridge Farm Group’s greenhouses can rise to as much as 40°C without any intervention. There isn’t a plant able to withstand such temperatures without a negative effect on growth. ReduSol lowers the temperature sufficiently to prevent problems. ReduFuse IR is currently being used for some varieties as well.

Bridge Farm Group is a leading producer of indoor plants, outdoor plants, flowers, and herbs in the United Kingdom. The farm has three locations in Spalding (Lincolnshire). British weather is changeable: it can get very hot in summer, but some days can also be very cloudy. 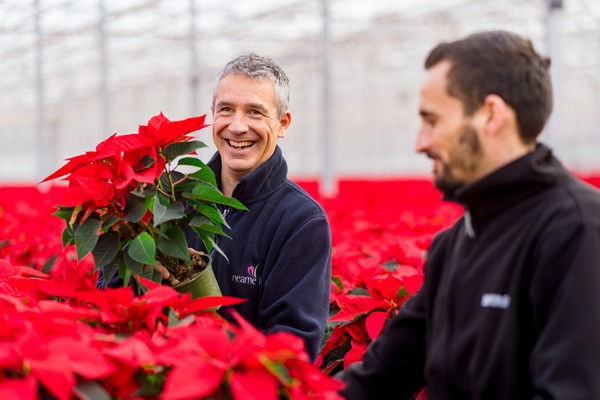 "We have used a movable energy screen to protect our plants against excessive radiation. However, you cannot pull it completely closed; you always need to leave a gap open for air circulation. With ReduSol we achieve better uniform protection and a better greenhouse climate," says Antonio Rodrigues, Crop Manager for the three locations.

Problems solved
‘When you do not do anything, excessive radiation will cause plant stress. An example is seen on cyclamen leaves which can be scorched or disfigured, and the plant will experience flowering problems. In addition, the plants will not be as strong and will be attacked by insects. That was a big problem for us. Even for stronger varieties, such as chrysanthemums, temperatures can become far too high, and with the use of a blackout screen in summer high temperatures risk a delay to flowering. This was particularly the case in the first year after the greenhouse was built, because the glass was so clear. Now that we are using ReduSol, things have improved significantly. We are no longer experiencing these problems,’ he says.

Poinsettias, particularly in their early weeks after planting, also require extra protection in summer. The plants are grown to sell around Christmas. "The Poinsettia as such is a strong plant. However, in the hottest months, the plants are still young and vulnerable. That means you really need to be able to temper the radiation," says Rodrigues.

Furthermore, a layer of ReduSol is also applied to the other sections with herbs, such as basil, parsley, coriander, and the like.

Sunspots
He still experiences difficulty with the fact that sunlight directly hits the plants here and there through the open roof vents. "You don’t always have the option of choosing whether to open the vents on the wind side or the lee side. When the radiation through the vent windows becomes too severe, we make adjustments using the screen," he says.

ReduFuse IR
Britain regularly experiences darker days in summer. When this happens, ReduSol actually reduces just a bit too much light. ‘This is why the team recommended they try out ReduFuse IR for Poinsettias and herbs. This allows you to keep sufficient light while reducing temperature. That is beneficial for these crops. You can really feel the difference on a sunny day,’ he says.

This also gave him the idea of applying ReduFuse IR to the greenhouse cover above the processing areas where nothing is grown. "We are still debating the best solution. But for the employees, reducing the heat is a very attractive option."

In-House machine
In the first year they did not remove the coating, but let the rain wear it off. "Last December we acquired our own roof washer with coating equipment. Now we can decide for ourselves exactly when to apply and remove the coatings. We are primarily targeting ReduFuse IR for the next season," Rodrigues concludes.