With data-driven greenhouses, the horticultural industry is reaching the future of cultivation

The world’s first publicly accessible data-driven greenhouse recently opened up at Tomatoworld in the Dutch town of Honselersdijk. In line with the type of greenhouse in question, their kick-off was done online with the push of a button.

In a pre-recorded video, the word was given to Tomatoworld director Miranda van der Ende and mayor Bouke Arends of the Dutch Westland. After this introduction, a variety of partners involved in the project gave their talks live.

Peter Hendriks, presenter Rob Veenman and Adri Bom-Lemstra kicked off the first round of speakers.

Publicly accessible
Right before the opening ceremony, Arends made a short and powerful speech about the future of greenhouse horticulture. With the new and innovative greenhouse, the world can’t ignore Westland, according to Arends. “We show them that we did not just sit still.”

What is unique about the greenhouse filled with tomatoes is that it is publicly accessible, which, especially with tomato greenhouses due to virus pressures, is not common these days. By making the greenhouse accessible to the public, it is intended that as many (inter)national growers as possible are taken along to experience the development process by showing them the showcase greenhouse.

As mentioned by Peter Hendriks of Hoogendoorn Growth Management and Ab van Marrewijk cultivation manager in Tomatoworld, those developments went quickly, among others. Ab talked about how a lot has changed in the ten years he did not visit the greenhouse that often. For instance, there are many sensors these days, especially in Tomatoworld, where they intend to test the latest innovations to use in practice eventually. 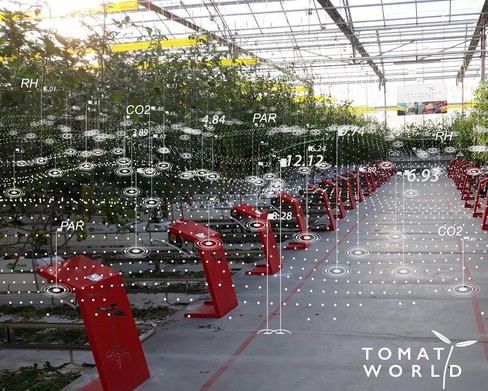 Tomatoworld has been around for 12.5 years. What once started to put the tomato in the limelight turned into the future of the entire horticultural sector.

One cohesive whole
But what do you see when you enter the greenhouse? "Firstly, beautiful crops that are nicely balanced”, says Peter. “That is what it is all about.”

Secondly, plenty of technology, among which many sensors. The combination of the process computer IIVO of Hoogendoorn, the LetsGrow.com system, and dozens of cameras and sensors of innovative companies made it possible for Tomatoworld to start and implement data-driven cultivation. “You really take a step into the future”, says Peter. But what is the most innovative part of the greenhouse? “The fact that everything comes together to make one cohesive whole.”

A reoccurring question regarding data-driven or autonomous cultivation is whether or not the grower as we know them today would still be needed ten or twenty years from now. The same question arose during the presentation. Adri Bom-Lemstra, chairman of Glastuinbouw Nederland, had no doubts about it. “The grower will remain the manager of the greenhouse. People are creative, and creativity will always be important to innovate.” 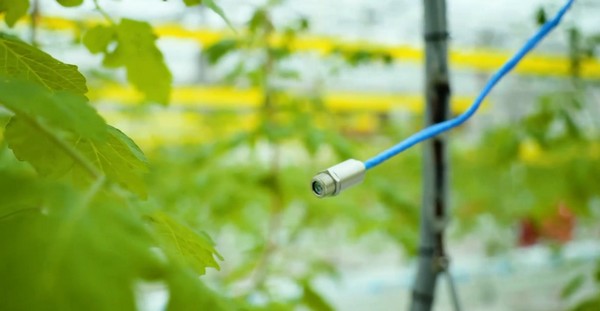 Without the naked eye
Other questions that came up were about what size a greenhouse has to be for data-driven cultivation and whether all those sensors are really needed? For both questions, the answers were encouraging to the growers.

Smaller greenhouses can also start data-driven cultivations, which can already have a great impact. For example, to get an insight into the temperature in the greenhouse through data and how to deal with the differences in temperature while keeping the best interest of the plants in mind. And the sensors? With just a few sensors, the growers, who are already using more and more sensors, can already acquire a lot of useful data. With a PAR-sensor and plant temperature sensors, the grower is already well on its way, and things will come to light that can’t be seen with the naked eye.

Keep up to date
Now that the greenhouse has opened, it is possible to be kept up to date the developments either by coming by in person or from a distance. In part, this is because the partners, among which are, besides the previously mentioned partners, Greenport West-Holland, Hagelunie, Gearbox Innovations, Cultilene Saint Gobain, and Hortikey, will be communicating about the development. But development can also be followed through Dutch Horti Platform. The platform is being developed to share knowledge and information surrounding the showcase greenhouse, says Miranda of Tomatoworld. You can also re-watch the recording of the recent event on the platform.