Things are going well in Zimbabwe, says Roelof Nugteren of Luxaflor Roses, a 22-ha rose farm in the Zimbabwean town Concession. Not only the demand for their roses keeps rising, the agriculture and horticulture industry is being picked up in the country again as well. “Socially and economically it is a stable country making it more attractive to start a business.” Also at Luxaflor more expansion plans are in the pipeline and as they are now propagating their own plants too, they are eager to supply the new rose farms that are expected to be established in the future. 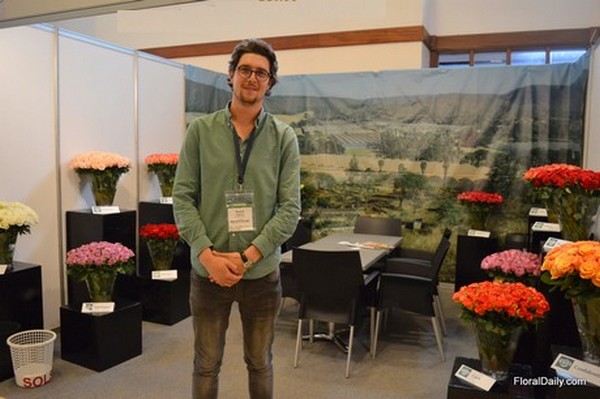 Roelof Nugteren at the IFTEX 2019 in Nairobi, Kenya.

Increase in demand
Luxaflor Roses supplies retailers in Europe and the auction in South Afirca and Nugteren sees the demand increasing year after year. "A probable reason for this rising demand is the reputation of the Zimbabwean rose," he explains. "In the 90s and early 2000s Zimbabwe was known for its roses; the country was the 2nd largest African producer of horticulture products. However due to the political unrest, it lost its position. In 2018 it started to improve and since then, Europe is increasingly buying our roses again." Also the amount of deliveries to South Africa is growing. "Delivering the Zimbabwean roses to the auction in Johannesburg is an efficient option, as it is a faster and more affordable way. We can deliver the flowers in a truck and they will arrive in about twelve hours," Nugteren says.

Social and economical improvements
Another influence on the rising demand for the Zimbabwean roses, is the improved social and economic state of the country. The improved situation is apparent at Luxaflor's farm as well, where 3000 people live. For example, several Fairtrade social projects have been set up to support the inhabitants of the farm, such as a chicken ranch of which the chickens are being sold locally. They are now starting to set up a mushroom farm, which will teach the inhabitants to grow mushrooms. "Outside of Luxaflor's farm, the agriculture is improving as well, as soy beans, corn and grains are being produced again. In addition, many farms that have been non-productive have started production again," Nugteren says. "We are also in contact with two universities in order to expand the knowledge of growing roses. The more knowledge that is available, the more the industry can grow."

COVID-19
Fortunately, Nugteren reports that the pandemic has not had much negative impact on his business and he could continue shipping out the roses. "Luckily, the influence of Corona has not been as bad in Zimbabwe as it has been in other countries. Of the 3000 people that live on our farm, for example, no one became ill. In addition, the Zimbabwean government has started to vaccinate for free, which has been very successful. An additional aid is the Covid Relief Fund, which makes extra help more accessible. On top of that, the government stimulates the financial sector to give out loans to people wanting to start a farm during these times, all of which are very helpful changes that are making the country more stable," Nugteren says.

Farm expansion
As a result of the rising demand for Luxaflor's roses, the company is expanding. This past year they already increased acreage from 16 ha to 22 ha, 0.2 ha of which they are using for propagating their own plants. And they are planning to expand for another 10 ha next year. "The new new greenhouses, all from Belgian suppliers Mereg and Vermako again, will be delivered at the end of the year, in which we hope to start production by around October '21," Nugteren says. "We have already sold most of our available flowers for next year, so we are looking forward to the expansion."