International Women’s Day
The celebration kicked off on International Women’s Day, March 8th. Non-profit organization Petals for Hope hand-delivered 25,000 tulips to women on the frontline, in nursing homes, women’s shelters, and more in ten major metropolitan areas. Petals for Hope repurposes flowers after events to share with individuals in less than desirable circumstances.

News crews were on hand to document the occasion; the story ran on MarthaStewart.com and 79 other media outlets. The campaign was enhanced by articles and advertisements in Florist’s Review and the Society of American Florists (SAF). Additionally, it was supported by a strong social media campaign. In total, it accounted for over 256 million media impressions.

Gather tulips event
The excitement continued with Gather Tulips, the first-ever virtual tulip festival held on March 27 and 28. Sarah Campbell, world-renowned floral designer of Intrigue Designs and Netflix’s “The Big Flower Fight,” hosted the event which also featured six other floral superstars. Each tells the story of how they fell in love with tulips by creating larger-than-life installations. 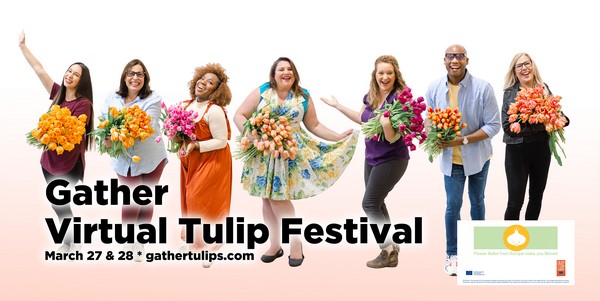 The influencers created a social media blitz, and the effort was promoted through SAF, Florist’s Review, and 82 additional media outlets. Altogether the Gather Tulip festival produced 313 million media impressions. The virtual event was especially appealing to a younger demographic who could recognize themselves in the diverse
cast.

“We were thrilled to be able to introduce a large, diverse audience to the delights of cut flower tulips,” says Peggy Anne Montgomery from Garden Media Group. “Each International Women’s Day will become more synonymous with gifts of tulips, and U.S. Tulip growers can build on this success year after year.”

For more information and videos visit FlowerBulbs.com and Flowerbulbs Make You Bloom.