Spartan researchers are working to show how LEDs can help Michigan’s greenhouse specialty cut flower growers save energy and improve their crops. When Americans buy their cut roses, carnations, and chrysanthemums for Mother’s Day, Valentine’s Day, and other celebrations, roughly 80% of those flowers come from other countries.

And in Michigan, Spartan researchers are helping light the way to a more sustainable, profitable future for cut flower growers and the local florists who buy from them. 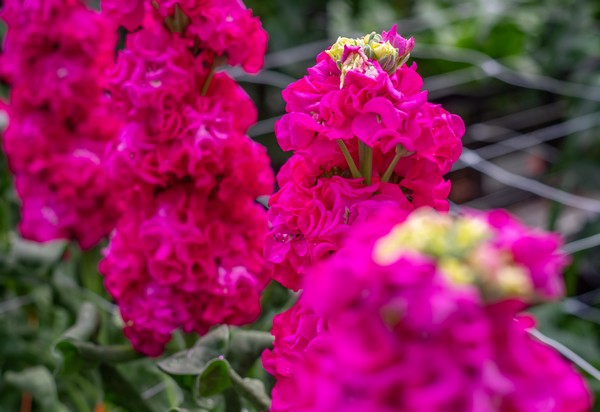 “There’s a huge demand for specialty cut flowers,” says Roberto Lopez, an associate professor of horticulture in the College of Agriculture and Natural Resources. Specialty cut flowers are flowers outside those big three – roses, carnations, and chrysanthemums – where the supply isn’t dominated by imports.

“There are more and more greenhouse cut flower growers coming along in Michigan and across the U.S.,” Lopez says. That’s why he and his team are working to show how light-emitting diodes, or LEDs, can cut growers’ energy bills, reduce production time and bring out the best in Michigan’s specialty flowers.

Daschner says most farms focus on growing up to about three different types of flowers. She grows closer to 30 so that her clients – florists in Southeast Michigan and Northwest Ohio – can have a selection of specialty cut flowers throughout as much of the year as possible.

“There’s starting to be a resurgence in folks caring about where their flowers come from,” Daschner says. “We’re almost in this renaissance of bringing the American cut flower industry back." 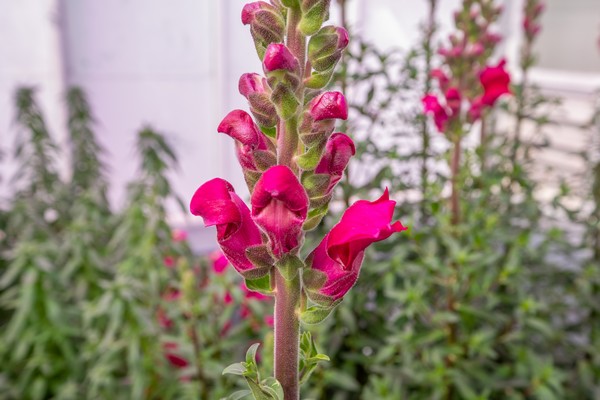 'You have to supplement'
If it weren’t for all the lights, Lopez’s space inside MSU’s greenhouses would be the perfect place for a nap. It’s 72 degrees with just enough humidity to make the floral-scented air feel cozy, like a light sweater just out of the dryer. And it never clings, thanks to fans that keep the air moving with a rhythmic, white-noise thrum.

But there are the lights. Hundreds of LEDs, which look like small glowing dots, of different colors, are mounted in panels hanging from the ceiling, some of which need to run for up to 16 hours a day.

“Some plants need more than 12 hours of light to flower,” says Lopez, who is a researcher and instructor in the Department of Horticulture. “If you want to grow high quality plants in Michigan, you have to supplement sunlight with high intensity electric lights.” 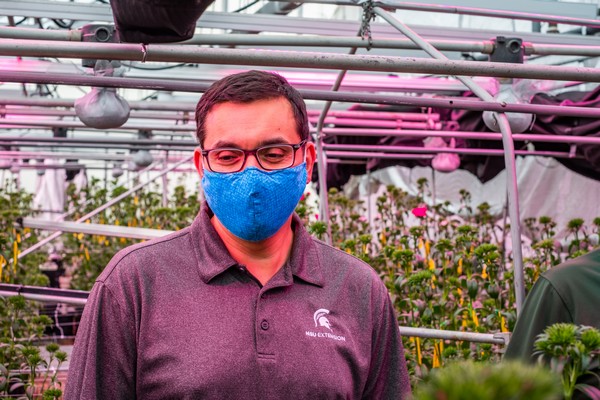 MSU Associate Professor Roberto Lopez stands in a greenhouse, looking over dianthus plants that are getting ready to flower. Credit: Derrick L. Turner

Lopez also works with MSU Extension, sharing his expertise with Michigan’s commercial greenhouse operators. Both Lopez and commercial growers work year-round in a state where, on some days, a yeti sighting feels more likely than the sun making an appearance.

Currently, the industry relies on what are called high-pressure sodium, or HPS lamps, for supplemental lighting. But LEDs offer advantages that Lopez and others are working to showcase in MSU’s research greenhouses.

LEDs use less energy than the high-pressure sodium lamps, meaning the light-emitting diodes cost less to operate over time. This can translate to substantial savings, especially when plants require light for hours on end, day after day.

The lights also come in a variety of colors, compared with the singular warm yellow of high-pressure sodium lamps. And these colors can promote different growth properties in the plants.

These choices – the colors, how long the lights run – are the knobs that Lopez and his team are turning in their experiments, finding the best settings to grow the best possible cut flowers as quickly as possible. “There’s not very much research out there,” Lopez says. “And there are so many questions.” 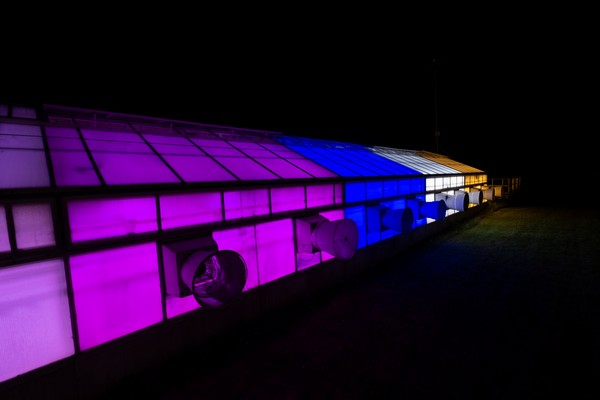 'It never gets boring'
One of the biggest looming questions for growers is how they can get the most out of the significant investment it takes to upgrade to LEDs in their greenhouses.

There’s no question the lights lead to long-term savings in energy and money, but they can also help growers start earning more money more quickly. LEDs can accelerate plant growth, reduce time to harvest, and accentuate features that are most attractive to florists and consumers, meaning more profits for growers.

So before spending the capital to convert their greenhouses to LED lighting then, growers want to understand which light “treatments,” or colors, are best for them and their flowers. That is, growers want to know how to use which LEDs to provide the best, fastest-growing crops.

“We want to provide the growers the information they need to take those next steps,” says Caleb Spall, an MSU graduate research assistant working on specialty cut flowers and a recipient of the 2021 Dave Dowling Scholarship from the Association of Specialty Cut Flower Growers. Spall is working with Lopez to test and understand the effects of different LED treatments in MSU’s research greenhouses.

“This is the most fun study I’ve worked on so far,” says Spall as he navigates between greenhouse compartments, showing off different flowers along the way: stock, snapdragons, and godetia.

Godetia is also known as farewell-to-spring, which feels slightly more appropriate now, touring the greenhouse in April, than it did when Spall started these experiments in January. And winter’s snowy, chilly conditions are part of what drew Spall to this project. 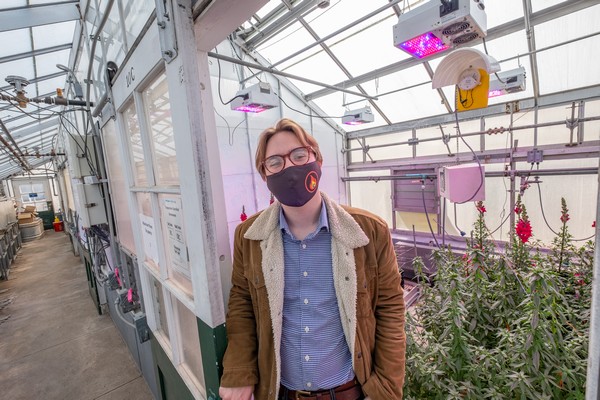 “I really want to help out small- and medium-sized growers in Michigan and other northern regions,” says Spall, who’s always loved cut flowers and even worked at a floral shop when he was an undergrad at MSU. “I want to provide information to those growers so they can grow the highest quality specialty cut flowers they can when the outdoor environment is too harsh.”

Although it’ll take another growing cycle to validate the team’s findings, this year’s results are promising.

For instance, the Spartans found that their all red-supplemental lighting treatment can elongate flowers’ stems, which can be an attractive feature to florists. And plants grown under all blue supplemental light flowered faster, a result that could help growers produce more flowers during the year.

To ensure that these observations are a consequence of the supplemental lighting, the researchers must also keep other variables, such as the greenhouse temperature and humidity, consistent. When asked how the team does that, Lopez points to Nate DuRussel, a research technician overseeing the greenhouse’s floriculture projects.

“It’s a big challenge. Every day brings different a temperature outside, but we have a pretty high-tech control system inside the greenhouses,” says DuRussel, who’s working with three different labs on more than 20 experiments. “It never gets boring.” 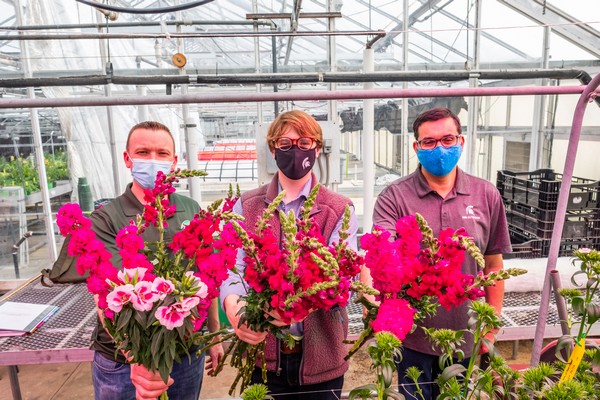 'Where there's a will, there's a Spartan'
There’s a sense of excitement, too, among greenhouse cut flower growers who are looking forward to the results from the MSU experiments, including Daschner of Forget Me Not Farms.

“I told Roberto, the second he has data, I want to see it,” she says. “We’re chomping at the bit to crunch the numbers and see what kind of difference LEDs could make for us.”

Daschner is already well acquainted with LED technologies. She worked as an undergraduate researcher with MSU’s Controlled-Environment Lighting Laboratory run by Erik Runkle, a professor in the Department of Horticulture. But she stresses that there’s much more that goes into converting a grower’s lighting system than picking up some light panels at the hardware store.

“You don’t just order an LED, you need to tailor a lighting plan for your greenhouse,” Daschner says. “It’s a big capital investment.” 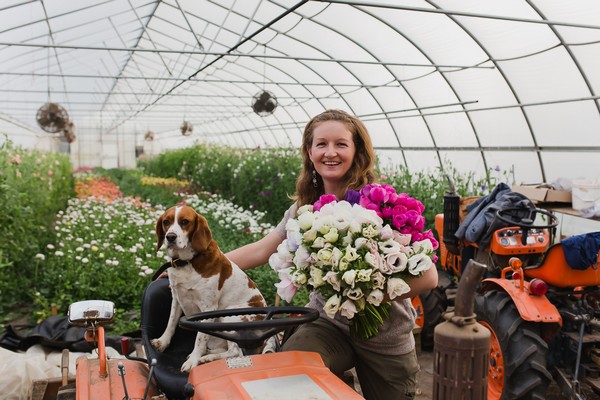 MSU graduate Lindsay Daschner and her dog, Tater, pose with cut flowers grown in her greenhouses at Forget Me Not Farms. Credit: Blue Stone Photographs

That investment, though, can help growers keep up with demand for those locally cultivated flowers, which has been growing over the past decade and heightened during pandemic. Local growers can provide more reliable access to products than can farms in Europe or South America.

Furthermore, compared with importing flowers from Colombia, Ecuador, the Netherlands and even Canada, buying locally sourced products cuts down on the fuel needed to ship flowers, as well as the associated carbon emissions.

Flowers also start wilting when they’re cut, so they’re stored and shipped cold to slow that process and preserve their quality. Reducing the time it takes to get the flowers from farms to consumers means better-looking flowers, and it also saves the energy that would have gone into refrigeration. So it’s a benefit to everyone, including the environment.

“We’re looking at what we can do to make a better product in a better way. The carbon footprint of the floriculture industry is real,” Daschner says. “A lot of people wouldn’t think that working in cut flowers would be solving a problem but it really is.” And Daschner isn’t surprised at all that MSU is leading the way to solve that problem.

“Where there’s a will, there’s a Spartan,” she says. “MSU is comprised of such an eclectic mix of people and you learn that you can find your one little way to make the world a better place. Everyone has their own way to make some sort of positive change.”