Planting seeds of personal development: the story of Smile Farms

It’s planting time, and Tyler is keen to get started. The garden beds are prepped and ready, the weather is perfect, and Tyler concentrates on his task of carefully dropping seeds in the earth. “He’s the most stellar seeder in the world,” says Rob Melnick, who supervises Tyler and other adults who have learning challenges. “He’s our go-to guy for that.”

Tyler’s job helps him develop life-critical skills. It’s part of Smile Farms, a program that trains people with developmental disabilities to work in horticultural settings. For the Farmers, confidence, and self-esteem grow alongside the seedlings. “I like putting the seed into small boxes,” says Tyler. “I add dirt, seed, water, dirt, water to help them grow. Then they turn into plants!” 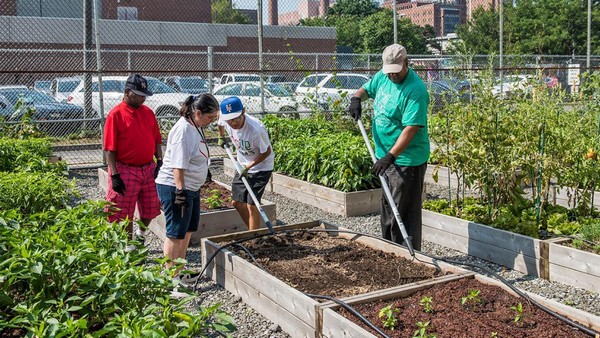 “Smile Farms is often a first job for our Farmers — and many come to our programs without experience working with others toward a common goal,” says Diana Martin, managing director of Smile Farms. “We offer them the opportunity to literally grow together, individually, as a team, and from the earth. It’s very special to witness their pride in themselves and in the fruits of their labor.”

The first seed is planted
The Smile Farms story began in 2015 with the McCann family. Kevin McCann lives in a group home on Long Island, New York, run by Independent Group Home Living (IGHL). When the program’s CEO, Walter Stockton, mentioned to Kevin’s brother Jim McCann, founder and chairman of 1-800-Flowers.com, that he was having trouble finding work for residents, Jim told him he’d be happy to help.

But when Jim scanned the local job market, he discovered that there were indeed very few options for meaningful work for people with developmental disabilities. “Work is about a lot more than a paycheck,” says Jim. “It’s about who we are, it’s social, it’s about fulfillment engagement, a sense of contributing, and giving back, learning and growing.”

“Job numbers for people with disabilities were low before the pandemic, and numbers have certainly dropped dramatically,” says Donna Meltzer, CEO of the National Association of Councils on Developmental Disabilities. “And we don’t know how many of these jobs will come back.” 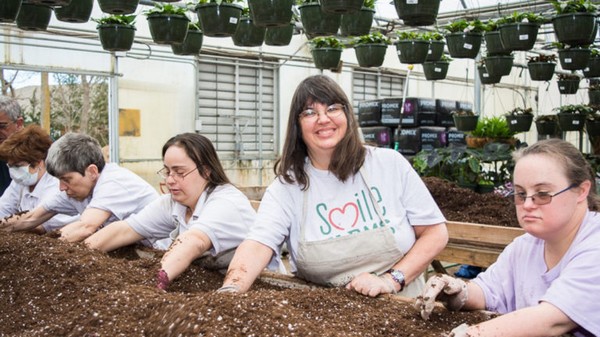 Jim was determined to fill that opportunity gap. He and his brother, Chris McCann embarked on a mission to design a nonprofit that would teach skills and hire people to grow flowers and produce, in turn giving them the opportunity to flourish. Today, job creation is still a focal point for Smile Farms, but the organization now expands on the educational and vocational programs offered by its partners, too.

A dream becomes reality
Smile Farms broke ground on its first working garden in 2015 at IGHL. Today, 140 Farmers receive paychecks funded by Smile Farms, and the organization impacts countless families across eight campuses, with two more planned for 2021. Almost none of the Farmers have worked before, so it’s the first time they are experiencing the satisfaction of mastering new skills, the pleasure of contributing to their team and community, and the thrill of taking home a paycheck.

The produce the Farmers grow is donated to nonprofits that serve communities in need. It’s also bought by local restaurants — chef Tom Colicchio sources it for his Small Batch restaurant in Garden City, New York, which prides itself on showcasing the best ingredients from Long Island. Some vegetables are enjoyed for dinner by the Farmers themselves, and baskets of them are sold at farmers’ markets to raise money that’s plowed back into Smile Farms and its partners’ projects.

Adapting and growing
Just as the Farmers learn and develop new skills, Smile Farms is adapting to changing times itself. When the COVID-19 pandemic made it impossible for the Farmers to work and socialize together, Smile Farms came up with ways to keep everyone’s enthusiasm and connection strong.

One particularly well-received project? Seed-planting kits. “We thought, ‘Well, we can’t bring our Farmers together, but we can give them something that mimics the experience of watching something grow and getting your hands dirty and watering it, seeing how it grows over time, and we can get it to them at home,’” says Diana. “We created kits by putting together basil, shovels, sun-catchers, and T-shirts,” she says. “Then we paired them with an art kit and painting video so they could explore that area of creativity at home as well.”

Although Smile Farms has only been up and running for five years, Diana says it has innovated and earned itself a solid reputation as a nonprofit leader in creating solutions for unemployment among young adults and adults with developmental disabilities.

Now the nonprofit is expanding its focus to offer its Farmers more opportunities to make an impact in their local communities and is setting its sights on expanding further in New York and beyond. “With two new campuses on the horizon, along with a host of exciting initiatives on deck at our current sites, 2021 will represent unparalleled growth for Smile Farms,” Diana says.

One top project — ramping up production on its hot sauce — features a variety of peppers grown on several Smile Farms campuses. “Our Farmers can’t wait to take our pepper project to the next level, and our nonprofit partners will benefit tremendously from the increased hot sauce sales we have planned,” Diana says. “Smile Farms will be making a difference in more lives than ever before.”