Every year for the past 32 years, Cleanfarms has calculated the rolling three-year average recycling rate of agricultural pesticide and fertilizer containers that are 23L and smaller. The great news is that the 2020 recycling rate just calculated shows another major surge in recycling these containers 2020 at 76% compared to 71% in 2019. This sets an all-time record for recycling empty ag plastic jugs in Canada.

The recycling rate measures the percentage of containers collected for recycling compared to the number of containers sold into the market in that year. The three-year rolling average recovery rate evens out the rate over three years taking into consideration factors that could cause variations such as differing needs due to weather. The rolling average rate in 2018 was 64%. 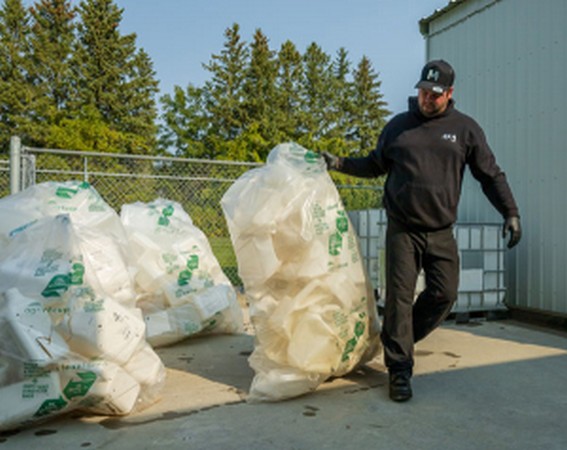 “Canadian farmers deserve huge credit for these unparalleled results,” said Cleanfarms Executive Director Barry Friesen. “They are bringing back rinsed, empty containers in increasing numbers year over year, which means more of these ag plastic jugs are getting recycled into new products in a circular economy.” In total, farmers returned more than 5.5 million pesticide and fertilizer jugs 23L and smaller in 2020. Placed end to end, that number of containers collected in one year would stretch from Montreal, Quebec, to Brandon, Manitoba.

National expansion of volunteer stewardship program
Canadian farmers typically purchase crop input products such as fertilizers and pesticides in easy-to-handle 23L jugs. The crop protection industry started a volunteer stewardship program for empty containers in 1989. In 2010, Cleanfarms took over the program and expanded it nationally. Until four years ago, the recycling rate hovered annually between 60% and 65%.

In addition to farmers, Cleanfarms attributes the increased recycling rate to the more than 1,200 ag-retail and municipal operations across the country that run recycling collection sites and that work with farmers to get the empty, rinsed containers back. Cleanfarms is also developing incentive programs like offering free recycling collection bags that make it easier for farmers to collect, store and transport empty containers.

“For the last few years in our promotion and education materials, we’ve been asking farmers to bring back 100% of their empty containers. We want to recycle every one of them and it looks like we’re getting closer to that goal,” Friesen said. “We know Canadian farmers are committed stewards of their land and that they want to be environmentally responsible when it comes to how they manage this plastic ag packaging on their farms. We are grateful that they are responding positively to these programs,” Friesen said.