Looking for the proper protection of roses in hot summers

The hot summers of recent years represent a significant challenge for rose growers. The red varieties especially are sensitive to heat. Rozen Scheers has tried out various strategies.

In principle, the rose is a light-loving crop. Rozen Scheers in Kontich, Belgium was among the first rose growers to adopt hybrid assimilation lighting to help increase production through higher light levels. This is particularly relevant in autumn, winter, and spring. In the summer, however, the high natural light becomes a challenge. ‘Of the eleven varieties of roses we grow, we see burning and bluish discoloration on the buds of the red varieties in particular when there is too much radiation. This is because they heat up much faster than white varieties. We do not have any problems with the white varieties,’ says owner Wim Scheers. In addition, higher temperatures result in shorter stems. 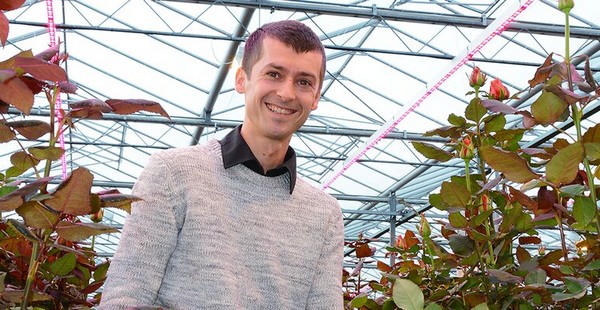 Evaporation
In his search for the best strategy, he initially used ReduSol for three years. This coating shields a portion of the solar radiation. ‘However, the greenhouse stayed too dark under ReduSol. As a result, the crop’s evaporation was insufficient. This is why we switched to ReduFuse IR over the past two years,’ he says. This diffuse, heat-reflecting coating is applied to the greenhouse roof by contractor De Ceuster.

‘The plant grows better under ReduFuse IR and there are no burn-related problems. ReduFuse IR also reflects part of the PAR light, but that’s not an issue. In the summer, to slow down growth and production somewhat are a good thing, because everything in Belgium comes to a standstill in August. Sales then slump and rose prices drop significantly,’ says Scheers.

Heatwaves
The frequent heatwaves we’ve seen in recent years are forcing us to make other choices. ‘The weather is becoming more difficult to predict. To be prepared for extreme situations we have acquired a misting system to be able to cool the crop. There is really no other way to effectively counter the effects of 25°C night temperatures. Today, there are rose growers who have installed a cooling system, but that is a major investment,’ he says.

He has not yet really found the perfect system. ‘Because we grow multiple varieties, we have to look for a ”happy medium” solution that works for all varieties. In recent years we used 18 buckets of ReduFuse IR per hectare. Due to the heatwaves, we are more inclined to move towards 20 buckets per hectare. Due to the changeable weather, it is difficult to do the right thing for all varieties at the same time.’