By far the majority of greenhouse horticulture businesses in the Dutch province Limburg escaped by the skin of their teeth last weekend. The water came very close at times, but the (emergency) dykes held. Over the course of the week, more will become clear about damage and other issues, although the flooding of greenhouses does not seem to have occurred. 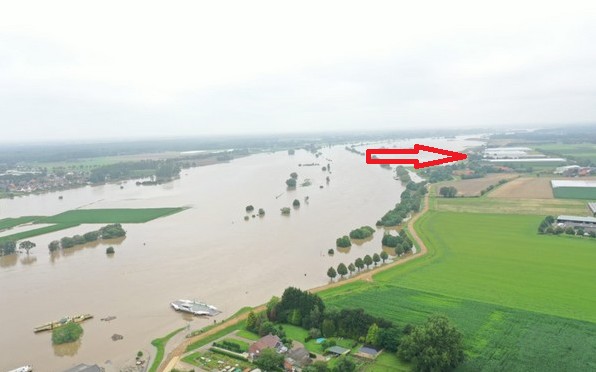 Top right in the photo are the greenhouses of Asian Crops. The water came very close, but thanks to the many volunteers and on the initiative of the entrepreneurs, the dykes were raised and reinforced.

Very close
One of the growers for whom the water came too close for comfort is Asian Crop in Velden. There, the greenhouses in which Asian vegetables are grown are only a stone's throw away from the River Meuse. Behind the dyke, though.

And it held, grower Danielle tells us. "Friday was tense. Because our glasshouses are relatively high up, we were quite positive. If our glasshouse were to flood, then a lot of things would be flooded.

Nevertheless, the necessary precautions were taken. "We and our staff, who also live here in the street, helped strengthen the dykes with equipment and manpower."

The growers remained on the farm and did not evacuate. "We also worked 'as normal' on Saturday and fortunately the access roads remained accessible, so we were able to deliver our products. We even had to water the greenhouses as usual."

Damage repair
Chris, a salad grower from the Michiels-Theeuwen partnership in Wellerlooi, also narrowly escaped. He let us know that in between business on yesterday's busy Monday morning.

BB Plant from Lottum, just north of Venlo, was not affected by the water either. "We're on a hill, 3 metres above the road", says Eugene Beukers. "However, the water did come 100 metres closer. A lot of work has been done on the Meuse in recent years. As a result, you see that areas that were never flooded before can now suddenly become flooded, while other areas remain dry."

Jos Smits, tree and rose grower just down the road in Broekhuizenvorst, was less fortunate. "There is a lot of damage", says the grower, who is busy putting his container field in order. "We'll manage, that much is clear, but it remains to be seen exactly how much damage there will be."

Horticultural businesses take initiative
Jean Aerts, a board member of the Netherlands Glasshouse Horticulture Association and chairman of the Limburg region, cites Velden as one of the examples where things were very close to catastophe. "Entrepreneurs in that area took the initiative and, with the help of the village and the authorities, raised the dykes. With experience from 1993 and 1995, when the water also came very high, they knew where the weak spots were."

From Thursday, preparations were set in motion, according to Jean. "On Friday and Saturday we worked very hard. The highest point was reached in the night from Saturday to Sunday. The emergency dikes held.

There is now a cautious sense of relief, Jean says, although the actual damage and other issues will become apparent in the coming week. For example, many horticultural businesses have had sandbags filled, forklift trucks used and heavy equipment deployed. "Parking spaces at growers' premises were affected, but fortunately these are 'only' inconveniences compared to what could have happened otherwise."

Open ground vegetables growers were less fortunate. An update on the response to the situation there, here.

More updates
Responding or adding to this update? The editors would like to see it at info@groentennieuws.nl