Greenhouse constructors will soon be sharing project information in one language

How high is the greenhouse? How many gutters will it have? And how many paths does the greenhouse have? The greenhouse builder already has an answer to all those kinds of questions, because that's usually where the design of a project begins. They record the entire process, from the rough outlines to the fine details.

In the past, all greenhouse builders did this individually, but all companies within the Hortivation Foundation will soon be able to exchange their design and realisation data in the Hortivation Hub. They will also do this, not unimportantly, in the same 'language', i.e. in the same way according to the Common Greenhouse Ontology.

In the past year, a number of suppliers have worked hard to develop a common terminology that makes it much easier to communicate with each other and thus to access data. TNO has limited itself to the data infrastructure in this project and has learned in the past that it does not need to develop new applications for it.

Egon Janssen, the glasshouse grower within TNO. "Companies prefer to develop applications themselves which process the data into new decision support. So don't expect an appstore or anything like that from us. See the hub as a kind of roundabout on which to communicate. The hub doesn't store any data and you can't buy anything there either." The Hortivation Hub does come with manuals that make it easier to connect to the roundabout and build applications.

Egon explains why that is useful below. He also explains the three latest user cases TNO is working on within the hub. 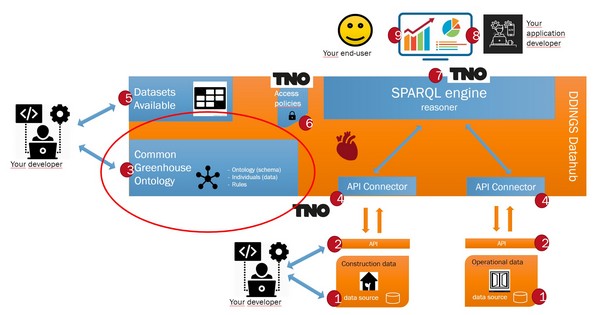 Greenhouse Information System
First of all, TNO is working on a Greenhouse Information System. "A no-brainer," according to Egon. "The suppliers of a construction project would like to share design and performance data in a simple way in order to prevent failure costs. You only need mass and sector knowledge to agree on things together. The Hortivation foundation has helped us to achieve this.

To explain how it works, Egon gives the example of a 10-hectare greenhouse construction project. "Whether it's done by a single turnkey company or by a group of suppliers together, several companies can work on it at the same time. All with their own expertise. A lot is also connected. For example, the design of the greenhouse may change halfway through the process. At that point, it affects a great many components.

From the KIS, all parties involved get direct access to this new information and they can easily check whether, for example, the screen or lighting installation they are supplying still matches the changed situation. Otherwise, once on location, it may turn out that something no longer fits, which of course costs money. You can prevent these kinds of 'failure costs' even better if the information is well-structured."

An additional advantage of the Greenhouse Information System is that upon delivery the end user has a standardised description of how the greenhouse is constructed. This information can in turn be used to link up with (future) providers of supporting dashboards and autonomous cultivation. Greenhouse Technology Booster
TNO is also working on a Greenhouse Technology Booster. This system enables suppliers to improve their greenhouse, their product, on the basis of technical usage data. Egon: "By interpreting the data correctly, digital optimisation can be carried out, making the final field trials less risky and allowing the end product to be introduced to the market faster. And that is music to the ears of the companies affiliated to the Hortivation foundation, says Lindy van der Drift of AVAG/Hortivation.

GAIA
And then there is GAIA. Egon calls it the most innovative project of the three. "Our aim is to connect the autonomous systems that are active in greenhouse horticulture. At the moment, it is often the grower who has to connect the various systems, compare them and see if they are in each other's way, for example."

Because this task still rests on the grower's shoulders, Egon believes that autonomous systems based on artificial intelligence, among other things, are not yet taking off. "Only when autonomous systems start to communicate with each other and take each other into account will their use in horticulture really increase, I expect. It goes without saying that this is an important issue for the Hortivation Foundation.

The role of the human being, the operator, remains crucial, even in autonomous systems. "The operator must formulate objectives and assign weight to them so that systems know how to deal with developments, such as a sudden labour shortage. If the labour system indicates a shortage, there is little point in pushing the crop in the greenhouse to maximum production, for example."

TNO has allocated four years for the development of GAIA. However, Egon expects to present a first prototype by Christmas this year to show that it is possible. There is one strict condition, however: the use of the Hortivation Hub. "All parties and systems must be able to talk to each other."