There are plenty of greenhouses in Limburg, the Netherlands, and elsewhere in the country.

The town of Horst aan de Maas wants to breathe new life into its greenhouse region. So, it is focusing on connection opportunities. Here, sustainable heat and electricity are crucial. That became clear at the end of July. Growers and Sjaak van der Tak met. Sjaak is from the Netherlands' Agricultural and Horticultural Organization (LTO).

Parties from the town council and sector explained plans to work together with local farmers. The town council sees so-called coupling opportunities. Those are in the areas of the economy, water, and energy. The municipality believes these opportunities have two sides - businesses retain prospects and help the council meet its sustainability targets. The council mostly discussed two greenhouse farming areas.

Heat grid
One has about 30 hectares of greenhouses. This can be expanded by five to ten hectares. The council cites realizing a heat network as an example of development for this area. That would be between the local Limgroup breeding company and a pig farm called Ashorst. These are already connected. A manure composter on the farm supplies the Limgroup's greenhouses with heat.

There is another example - VuurSaam. This is a biomass plant. At the farmers' initiative, they use the council's garden refuse to heat multiple greenhouses. One farmer mentioned that the possibility of an even larger heat network. It could sustainably heat not only other horticultural businesses. But also a school community, a sports complex, and possibly a residential area. That was in an article in a local newspaper, the Kiempunt Limburg.

Biomass
The council recently announced that research it commissioned showed there are too few regional wood reserves for the existing wood-burning plants. They no longer want to participate further in new initiatives. Existing licensed plants will, however, be respected.

"That concerns a council initiative. And the possible conversion of a poultry farm. The owner will stop farming with chickens and start with other agricultural activities. That will enable biomass combustion. This conversion should not increase emissions." explains Twan Heuijerjans, who represents the agricultural businesses. There are, however, crucial terms and conditions. These include using local biomass.

Profitable
"The possible addition of this biomass plant means the local greenhouse farming area will have three heat sources. The heat grid will use these to feed the area. That also allows other greenhouse horticulture businesses in the area a chance to use sustainable heat," says Peter Smulders, a greenhouse specialist.

"A nearby school, sports complex, and possibly homes are also in the picture. Connections have already been placed for the latter. Those were done when they laid the pipeline between the Limgroup and Ashorst. So, that step is completed."

Alderman Rudy Tegels has praised these developments. The council is taking a facilitating, encouraging role. "It's nice to see how the companies look to connect. Ashorst and Limgroup are good examples of this. More and more companies must be linked. And connection opportunities must be taken. Then, sustainable heat distribution becomes profitable."

Connection
There is another regional greenhouse area that boasts about 55 hectares of greenhouses. It can grow by another 20-or-so hectares. There, plans include finding mid-sized companies from further afield that want to establish themselves in the area. 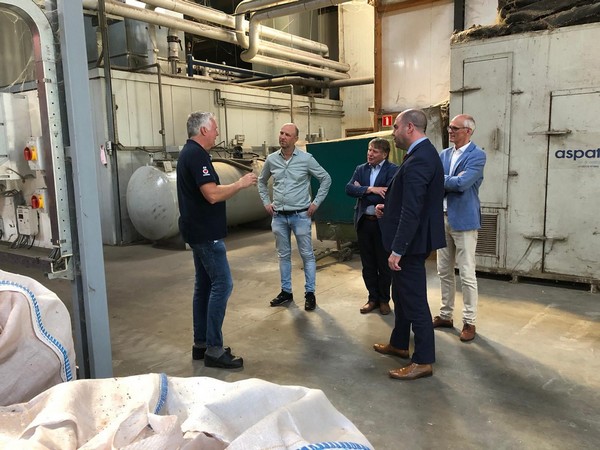 Geothermal heat
The council is considering geothermal as a sustainable heat source. There's a lot of fuss about this in the region. A geothermal heat project in the area went belly-up. The Dutch government halted its continuation, for now. Another local project, also involving growers, has been forced to shut down.

The council said it would be contacting the relevant government department. They want additional research into safely pumping hot water out of the ground. The council considers that 'complicated'. "We want to keep the idea of both deep and shallow geothermal energy open. And we want to make things clear for the local business owners."

"So, we, the province, other councils, the Dutch greenhouse organization, and businesses are working together. There is pressure to develop sustainable energy. More so now that gas prices are so high. We think geothermal energy is an important option," Peter adds.

Solar panels
The council is also busy with the power supply. It recently indicated it would be willing to help expand solar farms in Californië (Limburg, not USA). That is the region's fast-growing greenhouse area. "That concerns areas that can't be used for greenhouses," says Michael Bouwmans, who is involved in greenhouse projects.

There are currently about 15 hectares of solar panels in the area. The council has agreed that more can be added. "The electricity generated in these parks will be added to the grid."

Logistics
Lastly, the council and businesses will consider logistics. They will place roads signs. That will regulate traffic and improve its flow. This should limit and prevent inconvenience.

"These are all steps to future-proof our greenhouse farms and other businesses. We're proud of the sector, as are other municipalities in the Netherlands. We can learn from each other," Alderman Tegels concludes.