Jaap van der Meij has been appointed Managing Director of Gebroeders Alkemade commencing 1st July 2021. Following the acquisition of the company in 2020 by the Polish Vitroflora and the intention of the founders and previous owners Theo and Wil Alkemade to step down from the daily running of the business, management reinforcement was sought and found in Van der Meij. 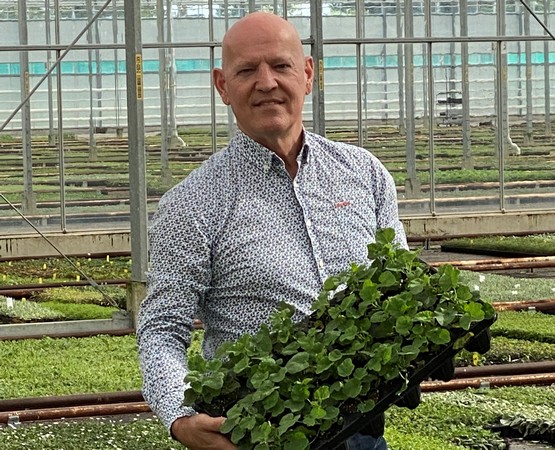 Strong background in cutting propagation
With an impressive background in cutting propagation, production, and management, Van der Meij’s profile perfectly matches his new role. In 1988 he rose to operational director and, in 1990, joint owner of the family company Van der Meij B.V., where he became responsible for moving the unrooted Chrysanthemum cutting production from The Netherlands to Kenya. He remained with the company as Operational Director after the merger with colleague producer Van Ruiten to form Sunfield Holland and later Operational manager after the sale to Royal van Zanten. In 2012 he moved to vegetable young plant production as Senior Project Manager by the Grow Group. He returned to Floriculture in 2017 as Production Manager by Armada Young Plants. As advisor of the Board he took up a leading role in the dissolution of J.D. Maarse en Zonen B.V. in Aalsmeer, in 2019.

Combining craftsmanship with cutting-edge technology
Jaap van der Meij: “Gebroeders Alkemade enjoys an excellent reputation in the field of young plant production. By combining traditional craftsmanship with modern technology, we are able to supply high-quality cutting-raised material for a competitive price. With the help of Vitroflora, I look forward to sustaining our leading position in the European Market’.

Matching personality
Karol Pawlak – Owner Vitroflora: ‘’Our choice for Jaap van der Meij was motivated by his extensive expertise in leading a company active in young plant production. Next to that, his personality and, to a large extent, his mentality and vision match well with ours. With our support and Jaap at the helm, we are confident that Alkemade will have a highly successful commercial future.”