This Fall, the first stinzen garden will be planted in the US

The Garden Media Group, representing European bulb exporters, are introducing stinzen gardens to the United States. The first large-scale stinzen garden will be planted in mid-October in the Finger Lakes region of New York. In total, 70,500 bulbs will be planted on a quarter of an acre. This naturalized bulb garden will bloom in succession for several months next spring. 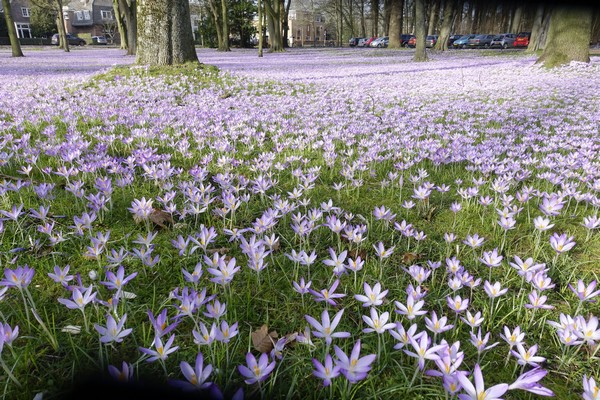 Stinzen gardens, and stinzen-style lawns may be new concepts to many gardeners, but their history is centuries old. The first botanical explorers began importing bulbs from central Asia and the Mediterranean to the Netherlands in the 16th century, and they brought back more than tulips.

Stinzen gardens can be found in many parts of the Netherlands, but are especially prevalent in the northern region of Friesland. The word “stins” is a medieval Frisian word meaning a fortified brick house, a kind of small castle for noble families, as only the wealthy could afford to build in brick hundreds of years ago. These estate holders also had access to the newly imported bulbs and decorated their estates with a succession of small, spring-flowering bulbs.

It’s unknown if stinzen gardens were the predecessors of what we refer to today as “naturalizing,” but they likely had some influence. The same vintage bulbs used hundreds of years ago in these Dutch gardens are still perfect for naturalizing today. They grow well in sparse lawns under deciduous trees and shrubs, taking advantage of the leafless canopy to soak up the spring sunlight.

Coming back every year
Using spring-flowering bulbs for naturalizing is a gratifying garden style that requires very little input and will bloom for two months or more. Once planted, the bulbs come back year after year, multiplying each season for a bigger and bigger floral display. They provide an early food source for pollinators and are food for the soul for us humans after the long winter.

Think long-term about where you are planting. Bulbs do best in well-draining soils and can tolerate full sun or part shade. Avoid planting them where rainwater collects on the soil surface, such as the foot of a hill or end of a drainpipe, since flower bulbs that stand in water too long have a greater chance of drowning due to a lack of oxygen. Most early flowering bulbs do well when planted under deciduous trees. The flowers emerge before or as new leaves unfurl and go dormant by the time the trees provide heavy shade.