Transformer is a soil improver that distributes the moisture in the soil homogeneously. As a result, 'wet is less wet and dry is less dry', which may sound cryptic, but is exactly the crux of the story. "In substrate, you can control moisture well, but in the open field that is more difficult. Because Transformer distributes the moisture in the soil homogeneously, horizontally and vertically, a more even cultivation can be achieved," says Martien Melissant from Oro Agri, a company that, outside of the horticultural industry, is known for Oroganic, a crop protection agent based on orange oil. 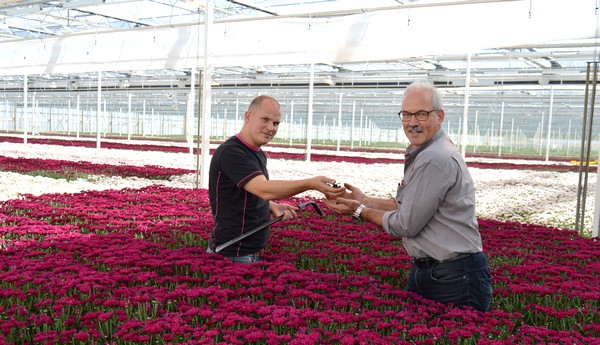 Marthijn Middelburg and Martien Melissant look at a soil sample.

Transformer is a liquid soil conditioner that a grower spreads in dosages over the soil with a spray boom at the start of the growing cycle. Although it will not be visible later, and though it does not really result in larger flowers or heavier fruit, it guarantees better rooting, increases the effectiveness of insecticides and fungicides, and ensures more efficient water use.

Even start, even growth
Marthijn Middelburg of Leen Middelburg Chrysanten in Kwintsheul also notices this. "In chrysanthemum production, everything depends on a good start", says Marthijn. "We regularly measure the moisture balance in the soil. After applying Transformer, it is much more constant. You won't immediately move up a weight class, but it does result in a more even, homogenous bed that you can harvest completely at once. You have a more even start and it grows more evenly." 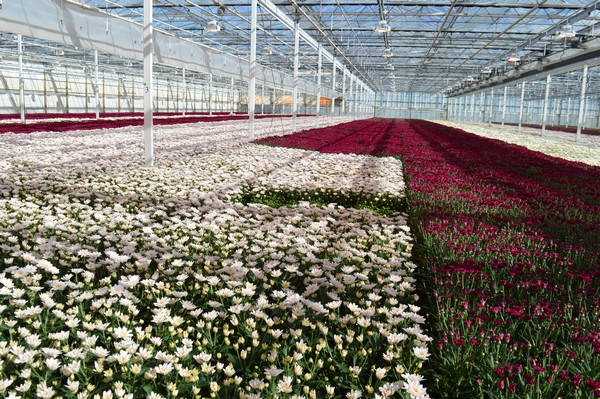 Thanks to a better (horizontal and vertical) moisture distribution, the fungicide given at the start also comes into its own. A better moisture balance should also keep nematode pressure in check, as nematodes build up when there is too much moisture. "It's exactly right for the chrysanthemum," observes Martien, "precisely because the soil plays such a crucial role. It is an intensive crop, with several cultivation rounds per year. After irrigation, the topsoil soon becomes too dry, while a little deeper in the soil, the climate around the roots often remains too wet. In that respect, Transformer gives the grower a steering wheel, especially now that winter is approaching. You have less favorable circumstances, and therefore watering is extra critical. It quickly becomes too wet and then fungi can strike again."

Orange oil
Oro Agri is one of the producers of an insecticide based on orange oil, Oroganic, known in Southern Europe as PREV AM. In the past year and a half, it has been authorized for use on indoor crops, and it is thanks to this authorization that the company has rapidly gained recognition in horticulture rapidly.