Given that poinsettias are propagated during the hottest months of the year and have a very long production time, they are prone to several pathogens, pests, and physiological disorders. Occasionally, greenhouse growers observe irregularities on the leaves or stems of their crops that are not caused by insects or diseases. Environmental factors during both propagation and production, such as drought stress, exposure to high light or temperatures, or changes in relative humidity can all cause poinsettia leaf abnormalities, distortion, crippling, or puckering. 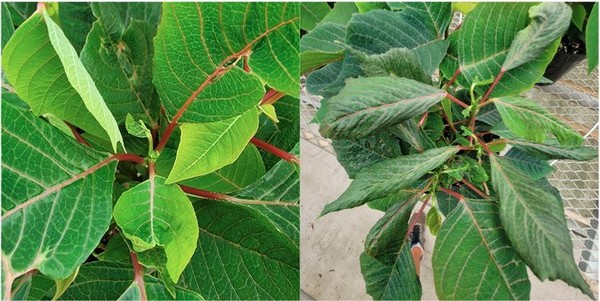 According to Michigan State University Extension, these issues are often the most difficult to diagnose as you cannot isolate the problem in a petri dish or visually observe an insect or pathogen. Recent reports of leaf abnormalities align with the traditional occurrence of these symptoms that often occur from mid-September to early October.

Remedy: Typically, as plants grow, mature leaves will cover the distorted or damaged young leaves and not influence the marketability of the crop.

Remedy: Keep plants well-watered, and if plants are drought-stressed, do not irrigate with very cold water. 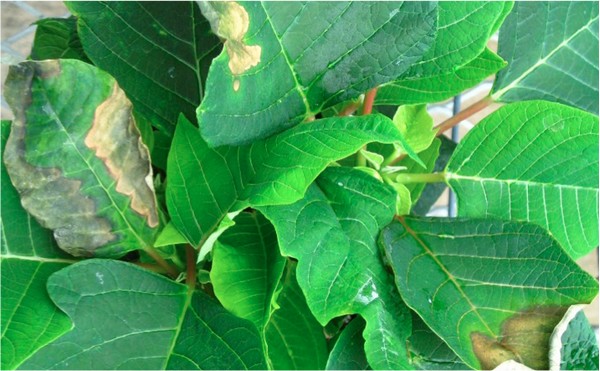 Remedy: Early branching cultivars should be pinched between 12 and 14 days after transplant to prevent poor branching and stretch. Consider also removing one to two “flag” leaves just below the pinch, leaving only the bottom three or four leaves to increase light penetration to the developing breaks, promoting stronger and more uniform branching. 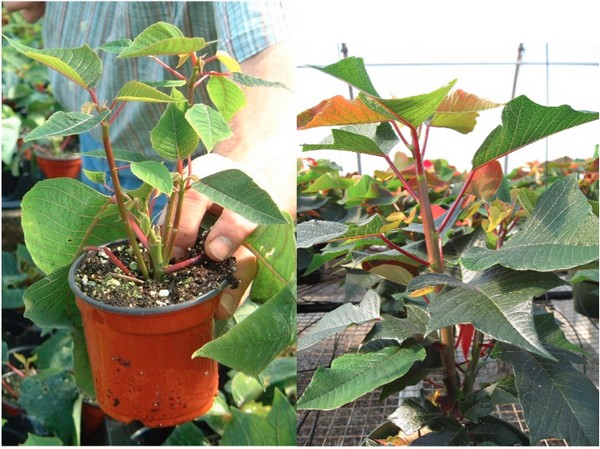 Excessive stretch of stems and poor branching can be a result of growing plants pot tight (not spaced apart) or from pinching plants too late. Photos by Royal Heins and Roberto Lopez.

The first three to four weeks after transplant are critical for the success of your crop. When rooted cuttings are transplanted and placed in very hot greenhouses (more than 90 degrees Fahrenheit), plants do not branch well and develop leathery, hard, strapped-shaped leaves several weeks later. Provide shade if it is not possible to keep greenhouse temperatures below 90 F.

For more detailed information on each of these conditions, more photos, and further recommendations, check out the e-GRO Alert 10.36, “Poinsettia Leaf and Stem Abnormalities.”