Tim Davis, Ph.D., former head of the Department of Horticulture Sciences in the College of Agricultural and Life Sciences at Texas A&M University and a long-time colleague, said Pemberton built strong relationships within the horticulture industry that made a lasting impact on Texas landscapes.

“There is no doubt that Brent’s work has left an indelible mark on ornamental nursery plants and ultimately home gardens and landscapes around the state and beyond,” he said. “If you appreciate ornamental flowers, shrubs and trees, then you can appreciate that his work likely influenced those plants’ attributes, availability and ultimately their success in the space they were planted.”

Pemberton part of an evolution in ornamental plants
Pemberton arrived at the Texas A&M AgriLife Research and Extension Center in Overton in 1982, fresh from wrapping up his doctorate studies in floriculture at the University of Minnesota. His early work focused on providing science-based knowledge to improve production practices in roses.

Northeast Texas was a hub for the rose industry, and his work provided guidance for propagation, fertilization, disease management and post-harvest handling recommendations for bare-root plants and their packaging.

Rose production in the region changed over the next few decades as field production moved westward, but northeast Texas remained a major processing and distribution center where bare root plants are also grown or packaged in containers for retail sales.

The ornamental industry changed significantly during Pemberton’s career, and consumer demand for bedding plants created the need for research to test plants in field conditions to guide producers and consumers to success with plants. Breeding selections from many programs were evaluated to promote characteristics, such as color variety to improve aesthetics, and for tolerance against heat, drought, pests and disease.

“There has been tremendous growth in the bedding plant and ornamental industry over the last 30 years, and there were no good evaluations of new varieties in this region,” Pemberton said. “So, the program evolved into developing trials and field performance evaluations. Those evaluations helped growers make better management decisions and ultimately helped consumers succeed with plants in their gardens and landscapes.”

Over the last 28 years, Pemberton opened his field trial gardens at the Texas A&M AgriLife center at Overton to the public during the East Texas Horticulture Field Day. The day-long event includes a tour of the gardens and container plant trials, which allowed the public to view more than 500 ornamental plant varieties and engage with experts about them. The field day also included educational presentations by experts in the afternoon.

“Dr. Brent Pemberton’s research has contributed a great deal to the horticultural industry of Texas,” he said. “His designation as a Regents Fellow as well as numerous awards he has received are evidence of the significance of his work.” 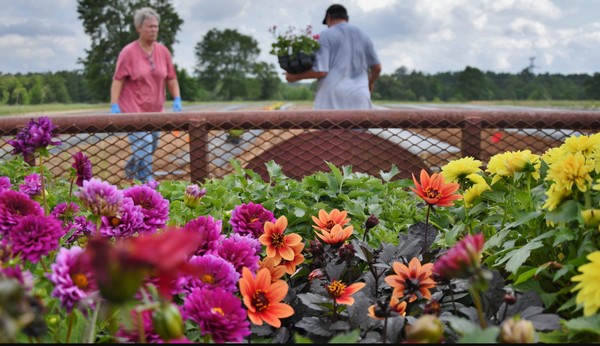 Other notable projects to produce, promote better ornamental plants
The evolution of the AgriLife Research field trial programs across the state dovetailed into other initiatives. One of the most successful was the Texas Superstar plant program, which helped promote ornamental plants that perform best around the Lone Star State.

Plants that reach Texas Superstar status are vetted through extensive field trials at AgriLife Research locations around the state and have shown consistently good performance characteristics in Texas. This was important as the state has a number of ecoregions that present an array of conditions including climate, soil type and annual precipitation.

Texas Superstar plants are added each year, following years of performance evaluations and approval by the nine-person Texas Superstar Executive Board. That board consists of horticulturists from AgriLife Research, Texas A&M AgriLife Extension Service and Texas Tech University. Pemberton has served as board chair for almost 20 years.

His work with plant trials led to another project to help growers in Texas and warmer southern climates with a popular holiday plant – poinsettias. The research focused on higher temperatures in greenhouse settings and their impact on how plants grow and flower. Timing peak flowering with peak demand around the holidays and producing compact aesthetically desirable poinsettias is critical for local growers. Pemberton’s research helped guide their crop management.

Pemberton’s early work with roses circled back to him in recent years as he became a part of a national specialty crop research collaboration on garden roses led by David Burn, Ph.D., AgriLife Research rose breeder and geneticist, Bryan-College Station. The program is designed to improve rose selection aesthetics, but also their tolerance to heat, drought and disease, Pemberton said.

Research careers are about relationships, collaboration
Pemberton said relationships with colleagues, including on-campus specialists in fields like horticulture, entomology and plant pathology, undergraduate and graduate students, AgriLife Extension agents and the support staff at Overton were invaluable to him personally and professionally. He also gave special thanks to the many Texas Master Gardeners program volunteers whose work made the field trials and other research possible.

“There are a lot of people to name,” he said. “But fostering those relationships and the collaborations, and the technical support to the day-to-day labor of making the field trials work, were the strength of the program here at Overton.”

Pemberton said he will continue to consult on the trial work and other projects and maintain ongoing relationships in the field, but that it is a good time to step away from full-time research and fieldwork.

“At this point, it really is as simple as wanting to spend more time with my wife, my family, the grandkids and friends,” he said.