Colombian flowers are playing a prominent role in Seoul and Tokyo through a strategy of international presence and stance.

As a part of its effort to give international positioning to the flower sector, Asocolflores has undertaken various activities, as of last November 24th, to bring the emotional quality of flowers closer to the residents of Seoul and Tokyo.

“Maintaining a steady growth in these markets has been an interesting challenge. As a strategy to obtain this goal, we are enhancing relations with the importers in those countries and sharing the good nature of our products with the end users. During 2021, with the support of the Ministry of Agriculture and ProColombia, we started to use other showcases for our flowers, such as movie theaters in the principal cities and other venues where, day after day, thousands of people gather together,” said Augusto Solano, President of Asocolflores. 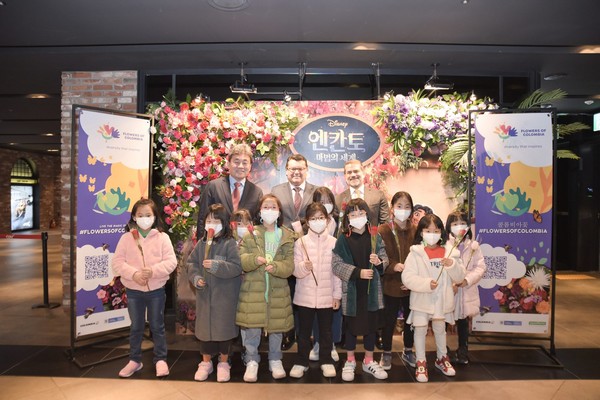 In line with the above, the opening strategy has been to be present for two weeks in a row at the premiere of Disney´s film 'Encanto' held at the main cinemas in Seoul (CGV Yongsan Theatre) and Tokyo (Roppongi Hills Toho Cinema and Futagotamagawatoho Cinema).

“Flowers are the ambassadors of our country´s natural and cultural diversity and that is well portrayed by the film 'Encanto'. We decided to show our flowers at the theater foyers so that the viewers can take photographs, and show short videos with the trailers highlighting their colors, fragrances, and diversity, as well as holding a private presentation in each city to invite the main flower importers of each country, government officials, entrepreneurs, the media, the academia, and the diplomatic corps,” added Solano.

The second strategy is carried out at the Tokyo Train Station, the busiest in terms of the number of trains per day (over 3,000) as well as the terminal for most of the Shinkansen lines (colloquially known as the bullet train). There, as in some of the trains, passengers can watch a video highlighting the country´s image and inviting people to experience and enjoy the colors, fragrances, varieties, and textures of the Colombian flowers.

“We want more people to choose our flowers, buying them more often. That is one of the reasons why we are in Seoul and Tokyo, generating new exhibition areas and reaching out to others because flowers certainly give rise to unique emotions,” concluded Asocolflores´ President.