This week, Gediflora celebrated breeder Wim Declercq for his, as e joined the company exactly 40 years ago. That has to be celebrated! 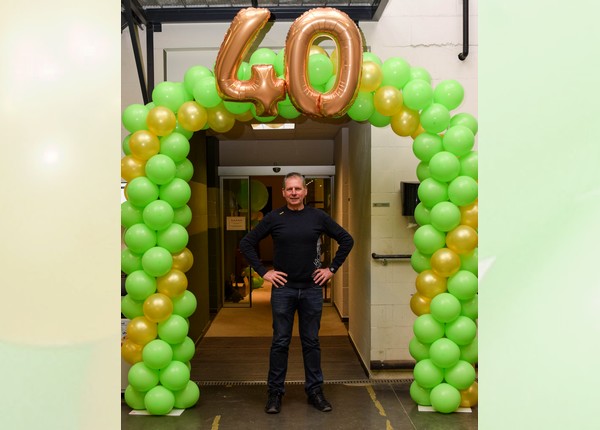 On Monday 4 January 1982, Wim Declercq started his career at Gediflora, then still Georges Pieters and son, as a picker. After two years of picking flowers, Wim got the chance to help with the packing and shipping process of the cuttings. For some years he combined this task with picking cuttings. In the greenhouse Wim increasingly gained new responsibilities. He was given control over the mother plants, which at that time were still present in Oostnieuwkerke itself. He also became a planner. He decided which cuttings should be planted where and when as mother plants and also the control of these mother plants came to him.

In 1987 Dirk Pieters started breeding his own chrysanthemum varieties. The person responsible for the breeding dropped out after a few months, and so Wim's career as a breeder was a fact. Since the end of the 1990s, Wim has been breeding Belgian Mums full time and can also call himself the head breeder at Gediflora. Thanks to his expertise over the years, Wim was also closely involved with the production sites set up in Brazil, the US and Kenya. Thanks to the knowledge of the mother plants that he still has from the beginning of his career, he also acts as an advisor at these production sites.

The day of celebration started with a nice breakfast and a touch of music thanks to an accordionist. Elien Pieters, Gediflora's current manager, wrote a personalised song and this was dedicated to Wim to thank him for 40 years of dedication. Elien: "Not only is he a loyal employee who you can always count on, he is also my professional right-hand man." The day ended with an aperitif. The colleagues and Elien warmly congratulated Wim and hope that Wim will remain active in the company for a long time to come.