WUR in Dubai: sustainable eating and drinking in the desert

The theme of the Dutch pavilion at the World Expo in Dubai is water, energy, and food. Precisely the areas for which Wageningen University & Research develops numerous innovations, also for the Middle East. In January and February WUR will be present in Dubai to demonstrate what knowledge and technology can mean for both the region and far beyond.

WUR’s knowledge and technology in the areas of water, energy and food are applicable in all sorts of places around the world and are thus also interesting for the Middle East. Perhaps precisely because of the challenging conditions there, because how do you grow vegetables and fruit at temperatures of nearly 50 degrees and how do you get enough water in the desert? 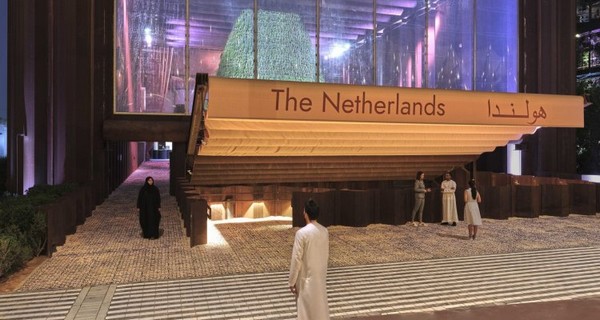 During the World Expo in Dubai (see Home – Dutch Dubai ) in early 2022 – postponed for a year because of the coronavirus pandemic – scientists from Wageningen will demonstrate what automatic greenhouses, vertical farms and innovative desalination methods could mean in the Gulf Region. And also beyond this area since many other countries across the globe will attend (online) the ‘water programme’ in January - during the ‘Global Goals week’ from the 16th-22nd - and the ‘Food Week’ from the 17th till 23rd of February at the Dutch Pavilion.

WUR’s chair of the board Louise Fresco will also be present in Dubai, either in person – if corona developments allow a visit – or digitally.

Three examples of what WUR is already doing in the Middle East:

Sweltering heat but lots of lovely cucumbers
Although vegetables like cucumber, tomato and peppers need some light and warmth to grow, the conditions in Abu Dhabi, where temperatures reach 48 degrees in summer, are far from ideal. You might think it would be better to import, but it’s not that simple. Jouke Campen, a horticultural technologist at WUR and active for years in the Middle East: “The food crisis of 2008 was a wake-up call to the countries there: they have enough money to import fresh products, but if there’s a worldwide shortage they’ll be on the losing end. And corona has also shown how vulnerable your food supplies are when you’re dependent on others.” In short: countries in the Middle East want to become producers themselves, mainly in greenhouses and to a lesser extent on the land (potatoes and courgette).

But that’s easier said than done; in addition to the sweltering heat in summer, it’s also bone dry. Campen: “It hardly ever rains, there’s little groundwater and that’s also too saline.” As a result, the quality of the produce grown is poor. Moreover, the amount of produce yielded is low. 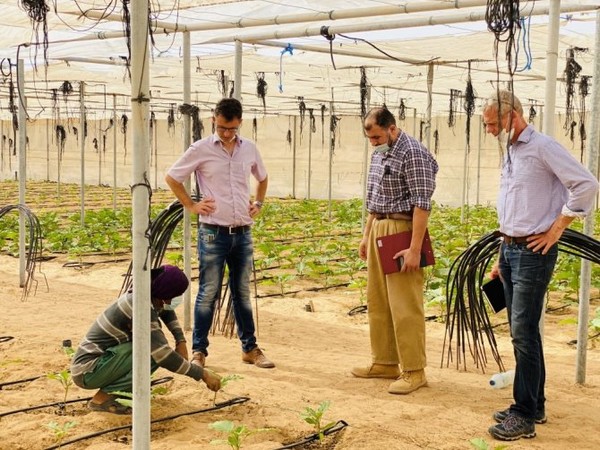 An employee of a grower in Abu Dhabi shows an aubergine plant to Jouke Campen (left) and his WUR-colleague Feije de Zwart (right). Photo: Jouke Campen

"Yet there’s hope", Campen added while dealing with requests for help from 800 growers in Abu Dhabi. “With the practical knowledge we’ve gained in the past few years in the region, we’re investigating adjustments to the greenhouse systems that would increase production and decrease the use of water. It turned out that if we improve the cooling system and allow more light to enter the greenhouses (so less dimming by screens), less water is needed for cooling, the greenhouse climate improves and production increases.”

And more progress can be made. “They still use a lot of pesticides there to protect crops. We’re studying how to replace these by using biological control, such as insects.” The more data Campen and his team collect, the better: “It enables us to learn how we can grow crops as best as possible in the region and that could be useful for lots of other places in the world.”

An important lesson that Campen has learned in the Middle East: keep it simple. “In the Middle East, there’s little knowledge about the best ways to grow crops and no knowledge at all about growing with the help of artificial intelligence. If we make things too complicated, the technology won’t be used. So we take that into consideration.”

Clever desalinization of liters and liters of seawater
Sweet water is scarce in the Middle East, and the seawater from the Arabian Gulf is not only very saline but is becoming more so as the earth warms up. To desalinate their drinking water, the countries in that region currently use the ‘reversed osmose - RO’ technique. “Water is squeezed through a membrane at high pressure, but because the water is becoming increasingly more saline, increasingly more pressure is needed to desalinate it. The process is becoming less efficient and is costing more energy per liter,” explained Maurits Burgering from WUR. Together with knowledge institute TNO, Wageningen Food & Biobased Research (WFBR) has found a solution: Memstill and its even more innovative successor MemPower. This prize-winning technology can desalinate water in another way: by means of distillation (see the animation MemPower: Pure water and electricity - YouTube). 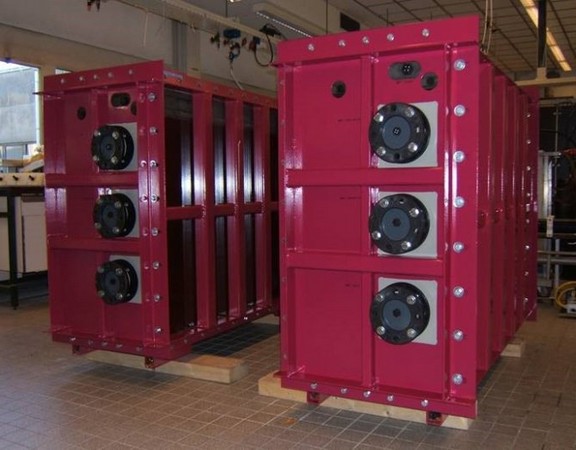 Burgering: “The pilot system, which is as large as a sea container, can better process high salt concentrations and can operate on more sustainable sources of energy such as sun, geothermal heat or residual heat. In the Middle East, such a system can work well using solar panels that can be placed on the desalination equipment in a building or, for example, a complex of greenhouses. In order for the solar panels to work well in the heat of the Middle East, they have to be cooled. You can also use the residual heat from this process to operate the Memstill. Such residual heat can also come from other sources, such as factories or facilities in the area.”

The Memstill technology has been tested in several pilot projects from Rotterdam to Singapore and Malta, and there’s now also a pilot project on Texel. Burgering: “It’s been sufficiently demonstrated that it works. The water produced is as pure as can be and, after the tiny addition of some minerals, it’s excellent drinking water.

This alternative desalinization technology is interesting to governments and businesses in the Middle East. But do they really think the sustainability factor of Memstill is so important there? There’s plenty of oil and gas. “That tide has to turn,” said Burgering. “They fully realize that they have to invest in the future and reduce emissions in order to keep the world liveable. Moreover, the old desalinization technologies could begin to break down if the seawater becomes too saline. And it would be quite annoying if you one day open the tap and nothing comes out.”

Plus: water is also essential for food security. “That’s why we now so often talk about the water-energy-food-nexus: those factors interact with one another. Definitely in the Middle East with its extreme conditions, but this nexus is present at many other places in the world.” So innovations in energy are just as important and can supplement other innovations, which is something you now see with Memstill: in the successor MemPower, the researchers from WFBR connect desalinization with the production of hydrogen, which can serve as an alternative fuel.

For both WUR and the Dutch companies involved in the development of Memstill, the Middle East is a very interesting market for start-ups, said Burgering. “The extreme heat and dry conditions form an extra challenge in the desalination process, which enables us to make optimal use of this technique. We’re ready; we’ve already developed a large technological plan and business plan together with partners in the region and we hope that local governments will follow through.”

High-tech greenhouses aren’t enough
Greenhouses with technical novelties make horticulture in the desert possible, but to actually get food production in the Middle East off the ground, you need to tackle the whole production chain, said Peter Ravensbergen, expertise leader Horticulture at Wageningen Economic Research. “From seed to refrigerated storage and transport. Plus training all of the entrepreneurs involved so that they can capably manage the diverse phases of production.” 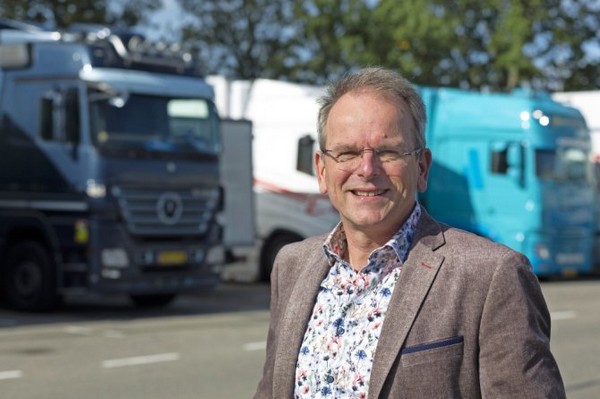 Ravensbergen refers to this as the ‘ecosystem’ thinking that’s needed to produce fresh food efficiently and sustainably. Because WUR is good at overseeing the whole chain, it is often hired at various places. “We analyse large-scale agrocomplexes. Hundreds of hectares filled with innovative greenhouses and vertical farms (closed buildings containing multi-layered cultivation in which all factors are applied, ed.) that can provide millions of people with fresh food in a sustainable way. An example close to home is Agriport A7 in the province of Noord-Holland with more than 400 hectares of glass (greenhouses, ed.) and entrepreneurs who generate sustainable energy themselves.”

Or the project in the American state of Kentucky where the local government called in WUR and Dutch universities of applied sciences as well as companies for advice on how to organise an enormous high-tech ecosystem, also 400 hectares. The message – and this also applies on a smaller scale in the Middle East: you can’t fix everything with money. “You can invest as many dollars or dirham (currency in Dubai, ed) as you want in hardware like greenhouses, but if you don’t have the right software and orgware – that is, professional knowledge and knowledge of business models – then you won’t succeed.”

Ravensbergen’s message during the World Expo in Dubai, which he will emphasise during the ‘food week’ in February, stretches beyond the possibilities for horticulture in the Middle East. But he doesn’t want to trivialise the importance of improving local food production. “Something has to happen, in the first place because the region is far too dependent on import. That not only creates uncertainty but it’s also not sustainable.” Ravensbergen finds it difficult to say whether producing locally in those extreme conditions isn’t just as damaging to the environment. “We don’t know that precisely yet, and it is an interesting learning point for WUR. Because we collect increasingly more data, we can increasingly make better predictions about what you need to grow food efficiently and sustainably in very warm, dry locations. For example, in the Middle East we’re studying which tomato varieties grow well, precisely how much water you need and how saline the water can be.” This knowledge can be applied in other parts of the world where such extreme conditions prevail – a growing number because of climate change.

Another important motivation for growing food locally and sustainably in the Gulf States is to decrease food waste, Ravensbergen added. Because the disposable income there has risen so sharply in the last few years, food waste per inhabitant is more than twice the world average. “By producing locally, you make waste more tangible – you squander the food that you’ve spent energy and money on to grown in your own country – and simultaneously you can encourage the re-use of residual streams so that you can process food residues in other food or use them as animal feed and in biobased materials.”