February 7, 2021, is forever etched in René Lievaart's memory. That day, he saw his 12,000m2 freesia greenhouse in the Netherlands collapse after heavy snowfall. Eight months later, a new greenhouse was completed. And René now grows lilies instead of freesias. A radical switch for a company that had been growing freesias for 80 years. "In retrospect, I'm pleased."

Ludvig Svensson spoke to the grower about all the changes. "I hope never to experience anything like it again," says René about the upheaval caused by the heavy snowfall. Lievaart's lowest greenhouse, measuring 12,000 m2, collapsed. That was under the snow that piled up against a higher greenhouse's wall. "I still can't believe it really happened. It was like a bad movie." 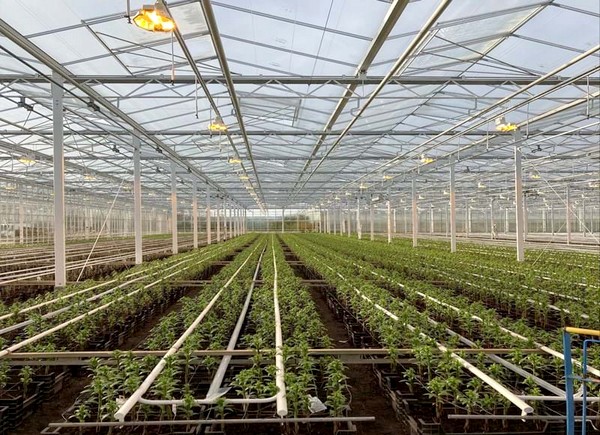 Entirely destroyed
The lower greenhouse was entirely destroyed. And the adjacent higher one, too, was severely damaged. Its wall had collapsed when the smaller greenhouse crumbled. And its heating system was ruined. "The next morning, it was -3°C in the greenhouse," René recalls. "I thought I was truly done for."

But, René's business was, fortunately, well-insured. And his insurer quickly got several suppliers to begin repairing the damage. They erected a temporary wall within a day. So, some cultivation could continue in the existing greenhouse. Peter v.d. Valk from El Flaco took care of renovating the screen installation. "Every last trellis was gone. So, we disconnected the screens and rewired the system," says the installer about this unusual job. "I've seen snow damage before, but this was just unbelievable."

Switching to lilies
Fixing everything happened quickly, but René needed a long-term plan. A new greenhouse was built, and the damaged one was repaired. René and his brother, Ful, decided to start over and switch to cultivating lilies. Another brother, Peter, grows freesias at a different location. He decided to continue on his own. "That all went well," says René, "but it's, of course, a drastic change. Especially when you consider that my grandfather started growing freesias here in the 1950s."

"Growing freesias is actually very challenging. It's extremely labor-intensive, and yields are generally low. Last year, the flowers were expensive. And then the greenhouse collapsed, which meant we didn't have any. That was an extra blow, but it also got us thinking. We got into talks with Moerman lilies. And our new and renovated greenhouses are now production sites for them. Our third greenhouse will produce one last round of freesias before we start growing lilies there too."

Ready for the future
For René, the transition is one with a steep learning curve. "I'm learning every day. We've had to adjust our technical systems. And hope to speed up the cultivation a little more," he says, describing the process. "I'm now continuously regulating the cultivation. Crazily enough, I just have to harvest soon. That's the best part."

In hindsight, René is pleased with the change. "Without that snowstorm, we'd never have switched to lilies. You could say Mother Nature literally pushed us in a different direction. But everything's worked out great. Everyone who visits says it looks fantastic. We're ready for the future," he concludes.