The discovery was made during an expedition at the end of January, when Brian was assisting Te Papa scientist Heidi Meudt in surveying for forget-me-not (Myosotis) species. Brian first came across the unusual plant in 1995, suspecting then that it might be unique. Returning to the Livingstone Mountains nearly three decades later, he was pleased to see it was still there and have a chance to study and photograph it. 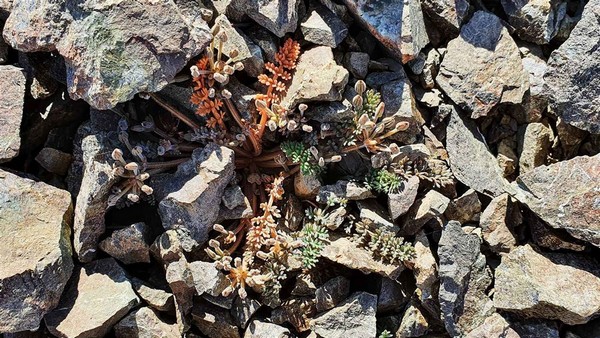 The plant is a small rosette-forming herbaceous plant 5–8 cm in diameter with a strong taproot. It has been given a temporary tag name of Chaerophyllum sp. ‘Livingstone.’ Brian says it is distinctive from other Chaerophyllum species because it is growing in a very exposed, alpine gravel habitat on ultramafic or serpentine geology, which is unusual for that group of plants. It has relatively robust leaves, a stout taproot, and large seeds. Its flower and fruit characteristics confirm that is a Chaerophyllum species, which is a member of the carrot family – though this plant may not be edible.

The ‘new’ plant will need additional research to rigorously compare it to its close relatives before being formally considered a new species. This research could take some time, but if it turns out the population is a new species, then its threat status would need to be determined. It is likely to have a threat status because of its small population size and very limited geographical extent.

And if it does turn out to be a new species, why is finding such a tiny plant exciting for New Zealand? “Who knows what special chemicals or properties it may have – for all we know a new plant could hold the cure to a disease,” says Brian. “Any new discovery is a taonga of New Zealand. Our flora is part of what makes New Zealand such a distinctive and special place and is part of our national identity. It is exciting to think that there are still plants out there that have not previously been seen or recognized as distinctive.

Read the complete article at www.doc.govt.nz.