"Market volume of 10.3 billion euro (at retail prices) will be reached"

German market for flowers and plants reaches record levels in 2021

The German market volume for flowers and plants will exceed the 10 billion mark for the first time*. This has been reported in the magazine of the German Flower Wholesale and Import Trade (BGI) that has been published recently. "With a significant increase of more than 9% compared to 2020, which already went well, a market volume of 10.3 billion euro (at retail prices) will be reached."

*according to AMI, which estimates are based on the first nine months of 2021. 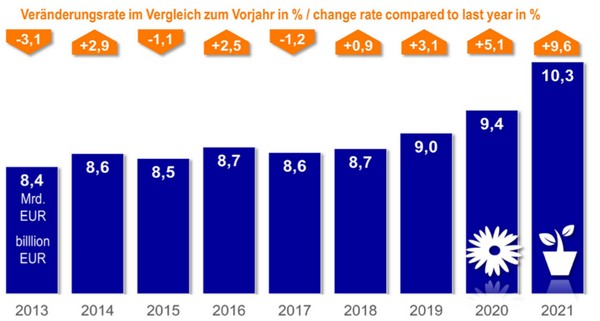 Across all product segments, the market benefited from increased consumer spending. However, this development was not volume-induced everywhere; prices rose significantly for some product groups. All this could lead to the assumption that it was a good year all round. However, the higher expenditure is likely to have been at least at the same level - as in 2020. The increased costs, regional lockdowns, changed trade routes and other influencing factors are also likely to have led to a neutral result for many companies, at least on balance. 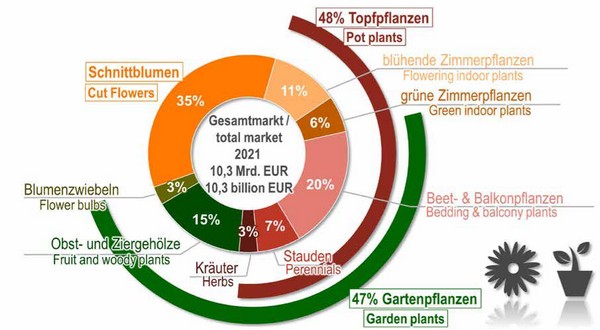 The composition of the market.

Ultimately, however, both the weather and the behaviour of
German consumers had a positive effect on the industry. For
despite the rainy year in parts of the country, a lot of outdoor
plants were bought, and in contrast to previous years, the heat
wave did not materialise.

In 2021 everyone is a winner
If we take the growth of the market as a whole as an average, the market segments can be divided into big and small winners, because all areas developed positively. Even flowering indoor plants, which are the least profitable, were able to outperform the previous year‘s result by more than 4%. Big winners in 2021 were the green indoor plants. The growth segment in the ornamental plant sector grew by 13% to EUR rate of 15% outperformed all others. However, the fourth quarter has become increasingly important in recent years.

It remains to be seen whether spending in the fourth quarter can be increased above average. With regard to the current development of the pandemic (and if there is no renewed lockdown), the „cocooning effect“ could well lead to even greater momentum for this submarket. “Cocooning“ means retreating into the privacy of one‘s own home. Obviously, the consumer‘s desire for an attractive environment, which also includes flowers and plants, is growing in this context. Flowering indoor plants were carried along by the trend, whereby it is noticeable that above all plants sold well where customers do not distinguish clearly between flowering and green indoor plants. Convenience also continues to boom for the interior. Planted bowls broke all records. At the same time, there are currently reports of some indoor plants for which the supply of small pot sizes may become scarce, as they are
predominantly marketed in bowls. 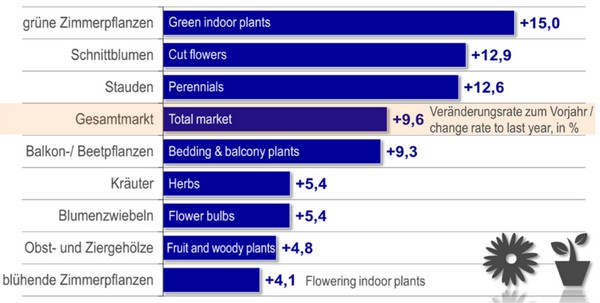 Market development for flowers and ornamental plants in Germany - private and institutional consumption.

This and more were presented in the magazine Close to Green'of BGI. Additionally, they Close to Green, they also report on trends, certifications, plastic and packaging, Fairtrade and corporate responsibility.