"suddenly everything is negotiable"

Forty percent of Dutch greenhouse growers are at risk of running into liquidity problems. This is according to Adri Bom-Lemstra, chairman of Glastuinbouw Nederland, in the Financieele Dagblad this weekend, although he isn't sure whether 'crisis' is the right word in times of war in Ukraine. "People fighting for their lives is a crisis, I'm not sure that's how I'd describe our monetary issues."

The percentage that the chairman mentions in the newspaper is higher than the twenty percent that emerged at the end of last year and also higher than the figure of 450 that was mentioned last week during an LTO round table discussion. The urgency of the problem in greenhouse horticulture has now been realized (almost) everywhere. Since the outbreak of the war, moreover, 'everything' has been negotiable with politicians.

"That was not the case for a long time," says the chairman of Glastuinbouw Nederland. The interest representative encountered a lot of skepticism and (political) statements still do not go down well with the sector. The suggestion made by the Dutch Green Left Party (GroenLinks) that the ornamental plant cultivation sector should 'just stop growing and use gas' is not well received. "Greenhouse horticulture cannot even stop using gas at all at the moment, because with 9% of gas consumption we supply 11% of Dutch electricity."

Without horticultural electricity, the lights would go out for millions of Dutch people, the newspaper summarises. Just this weekend, growers were called in to help balance the grid, Chrysanthemum grower Marcel Leeuwis revealed on Twitter.

Tweet above: "Today a new record in electricity generation by sun and wind. At the moment there is a bizarre power output from solar panels and wind turbines. Market gardeners are now forced to turn on the lights to save the power grid. Otherwise the power grid will crash. pic.twitter.com/78KD4QFrZV

The entire story in Het Financieele Dagblad can be read here, behind a paywall.

LTO Nederland investigates the cost price increases among farmers and market gardeners and how they affect agricultural entrepreneurs. By means of a survey, it also examines whether the increased costs are passed on in the chain and what the economic consequences are. Read more about the study here. The article also contains the link to the survey. 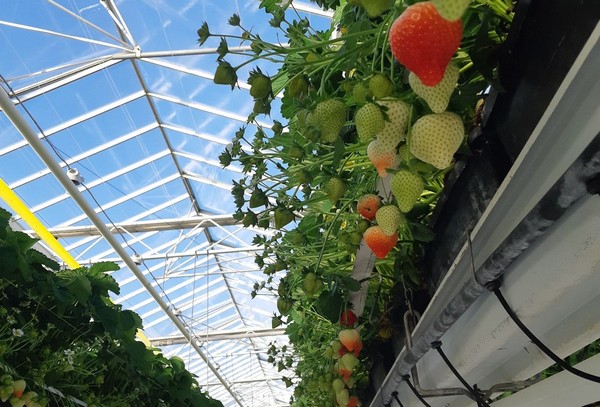 Just over the border from the Netherlands, Ronnie Jansen grows strawberries. He expresses the hope on LinkedIn that retailers and consumers will take the increased production costs into account.

The aforementioned round table discussion received a great deal of (national) media attention. To the satisfaction of LTO, who wrote more about it here. The same interest group also gave an update on Friday on the war in Ukraine and the consequences for farmers and market gardeners. View the update here. 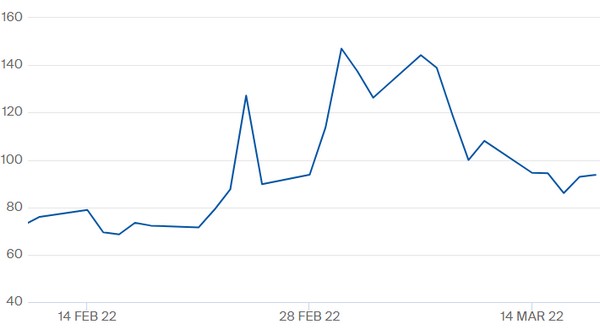 Contract price of gas winter 2022 on TTF until 18 March. Click here for enlargement and current prices

Speaking of updates, let's take a look at the gas price. On the Title Transfer Facility, the Dutch gas trading platform, the contract price for winter 2022 closed on Friday 18 March at over 93.7 euro cents per megawatt hour. The daily gas price for an April contract briefly shot below 100 euro cents between 8 and 10 a.m. this morning. The lowest price in three weeks, according to, among others, Nu.nl.

The NOS (Dutch news agency) published a story about 'a windfall' for the Ministry of Economic Affairs and Climate as a result of the high energy prices. Producers of sustainable energy can do without subsidies. "Wind and sun do not need a euro subsidy at the moment", says Olof van der Gaag, chairman of the Dutch Sustainable Energy Association (NVDE). "At the moment it is sustainable energy that keeps the energy bill within limits. Fossil is now unreliable and expensive, while sustainable is affordable and reliable."

Van der Gaag does not expect new projects to be set up en masse without subsidies. "The investments are about decades. I don't expect the price of gas to stay high for that long. At the beginning of the COVID-19 crisis, gas was still almost free."

Apart from energy prices, there are also plenty of other things happening. Both in the Netherlands and in Flanders, Belgium, attention is being paid to housing refugees. The Dutch Employers' Network Agriculture and Horticulture provides an update. They write, among other things: "On the basis of the Temporary Protection Directive for Ukrainians, refugees are entitled to care, education and access to the labor market, in addition to housing. The latter will most likely be possible as of 1 April next. This will happen through a temporary exemption from the obligation to have a work permit. Instead, there will be an obligation to report. Practical matters such as applying for a BSN, compulsory health insurance, and a bank account will be discussed further in the coming weeks."

The Flemish Task Force for Ukraine is looking for farmers and horticulturalists to find sustainable solutions for refugees from Ukraine after the initial emergency shelter. A digital housing tool was developed for this purpose on www.vlaanderenhelptoekraine.be, Boerenbond shares. A total of 18,000 sustainable accommodation locations are being sought.

The NOS reported a border blockade between Poland and Belarus by protesters since Saturday morning. Hundreds of trucks were soon stuck in traffic jams as a result of the blockade. "Every euro of trade with Russia kills Ukrainian citizens", the NOS reported. 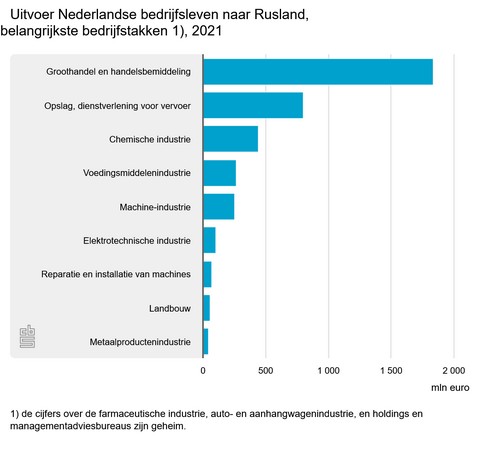 The Dutch embassy in Moscow and the Consulate General in St. Petersburg are organizing a webinar on Tuesday 22 March, in cooperation with the Netherlands Enterprise Agency (RVO), on doing business in or with Russia. Read more about the webinar program and register here.