Thanks to the development and adoption of specialized computational tools, the past several years have seen major advancements in the breeding of “polyploid plants” — plants with more than two sets of chromosomes in their cells.

Polyploid specialty crops, which include roses, many turfgrasses, and food crops such as blackberries, potatoes, and sweet potatoes, have an annual value of more than $9 billion in the U.S. and many times that value globally.

David Byrne, a Texas A&M AgriLife Research rose breeder and geneticist who also serves as a professor in the Department of Horticultural Sciences, is the director of a four-year, grant-funded project to create and improve software for polyploid genetic analysis.

Byrne and his colleague Oscar Riera-Lizarazu, an AgriLife Research plant geneticist and associate professor of horticultural sciences, received $4.3 million from the U.S. Department of Agriculture’s National Institute of Food and Agriculture in 2020 to develop tools for genomics-assisted breeding in polyploids. 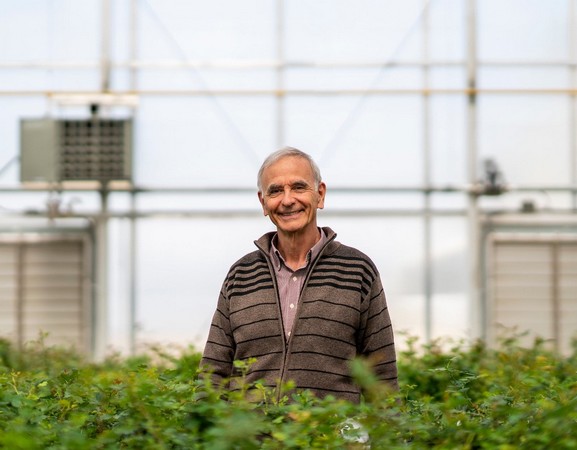 Polyploid tools ‘game changer’ for plant breeders
One of the project’s goals is to develop computational tools for quantitative trait analyses, genomic selection, and haplotype analysis in polyploid crops. Another goal is to train breeders and geneticists to use the tools in public breeding programs for a wide range of ornamental and food crops.

The team has held conferences the past two years designed to introduce tools to new users, gauge the tools’ usefulness and to guide their evolution.

“We had 300 people in 2021 and only expected around 75,” Byrne said. “There were another 300 this year, and more are expected at future programs. It’s a fairly specialized audience but a very important one, given the wide range of food and ornamental plants these professionals work with. The exciting thing is the number of new faces we see each time.”

Excitement, adoption among participants
Byrne said the conferences have drawn a wide range of industry experts, including plant breeders, molecular and computational geneticists, plant pathologists and physiologists, and entomologists. Around 30 percent of participants work with fruit plants, 28 percent with root or tuber crops, 16 percent with grasses, and the remaining 26 percent with ornamental plants, vegetables, or cereals.

Plants that will be impacted by polyploid genetic advancement include forage and turfgrasses, fruits like kiwi, strawberries, and blackberries, ornamentals from chrysanthemums to roses and root, and tuber crops like potatoes and sweet potatoes.

An exciting element beyond the diversity of the participants’ fields, Byrne said, is that most attendants were in their 20s and 30s, with nearly equal numbers of men and women. Most trainees were also in public plant breeding programs or were students. This group will shape breeding programs of the future, he said.

Byrne said breakout group sessions and subsequent feedback on the tools during the conferences have been invaluable for the technology’s evolution. This continued development is also facilitated by inviting software users to participate in the annual workshop and present their research.

“There is a lot of brainstorming and networking going on, and pulling users together,” Byrne said. “The interactions have led to collaborations on similar projects and use of the tools in actual research.”

Practicality and versatility
The overall project seeks to coordinate research around computational tool development, increase training and improve ease of use, Byrne said. The Polyploid Breeding Community Resource website serves as the repository for the computational toolsets, genomic information, training datasets and other materials. An associated YouTube channel contains recordings of all the training presentations given at the workshops.

Despite the importance of polyploid crops, major obstacles for using genomic tools in the past have included a dearth of suitable software and technical expertise. Prior to polyploid tool development, genomic information was only readily used for diploid crops — plants with just two sets of chromosomes such as corn, rice, soybeans and tomatoes.

Byrne said these computational tools enable the use of genomic information to accelerate the rate of genetic gain in a wide range of polyploid breeding programs, which will lead to a more rapid development of higher quality, more productive and more resilient cultivars.

The range of applications is drawing more and more interest, which has spurred new collaborations and improvements, Byrne said. “These breeders and programs were all doing similar things but separately,” he said. “There is an advantage to standardized information and sharing ideas and methods, and there is excitement about working out problems.”

Broadening technology, training, application
Byrne said the project is broadening training and accessibility of the tools and expanding their application across the plant breeding field. The software developed is open-source, so collaborators can tinker with and improve it.

Reducing the software’s computational requirements is a challenge the team is hoping to address, Byrne said.

There are also plans to make tools more visual, enabling users to see markers in a visual context and allow gene sequence overlays. For instance, contextual and visualized layering would allow users to see where genes are on chromosomes and identify connections with traits of interest.

Byrne said he is pleased with the technology’s advancement, and he is elated that literature continues to be published on the software and that more people are using it more often — clear signs that the application and user interface are headed in the right direction.

“The enthusiasm around the tools is way beyond my expectations,” Byrne said. “It is exciting to see the excitement around it.”