Could you do without large fans above the crop in the greenhouse? During a visit to a new-build project for a tomato grower, the men from Alcomij got the idea. What if you pull the air through the greenhouse column? A few years later, at the office in 's-Gravenzande, the editor of this article has a Caeli fan unit specially designed for this purpose in his possession.

Quite heavy. Sven van Heijningen, R&D manager at Alcomij and Caeli, sees me thinking and laughs. "Many people don't expect it. They might think it's a computer fan, but it's not. It's a very robust fan, which is powerful enough to move a high capacity of air."

The concept was presented last summer. This spring, the first large Dutch pilot project will be equipped with 308 units. Within a relatively short period, a patent was obtained for the concept. Several other applications are still pending. It shows that something unique has been developed in 's-Gravenzande. "I am sure that there is no better fan, tailored to the standard column dimensions," Sven is firm. 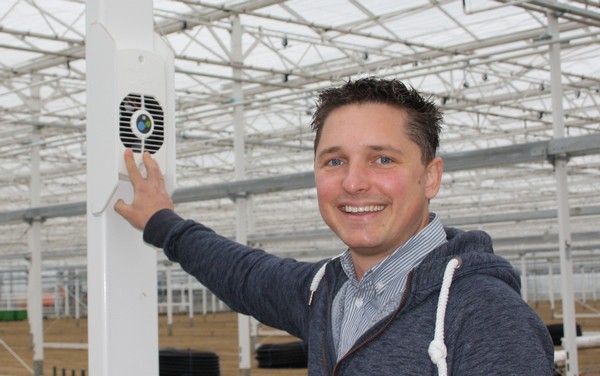 Smart equipment
The fan in question will hang above the crop and will integrate into the greenhouse column. Because of this, an adjustment in the screen cloth is not necessary. That was precisely one of the things that Alcomij wanted to achieve, recalls Erik Schäfer, Sales Manager at the producer of greenhouse cover systems, among other things, when the penny dropped. "It was colleague Gerhard who came up with the idea of drawing the air through the greenhouse column."

At that time, Alcomij was already busy making products 'smart'. Sven had the great task of working out the fan concept. He started tinkering. At first, he 'simply' used materials at home. "I'm a mechanical engineer and I made a lot of prototypes," he says. Meanwhile, a feasibility study was also carried out by Wageningen University & Research, with the main question being: How much air can you pump through the greenhouse column? More than enough, it turned out.

Air movement
The first test was then carried out in Zwaagdijk-Oost, at the Vertify test center. In an existing greenhouse there, 'version 0' of the unit was placed against the greenhouse column. Sven: "A grower did a trial there with tomatoes, peppers, and a little cucumber. It was a great opportunity for us to test our fan unit in this real-life greenhouse. We immediately achieved good results and then we went all out."

The first main idea behind the concept was to dehumidify the air under the screen. Sven: "The idea of separately controlling the air movement was added later. For this, the valve position and the speed were made adjustable. The unit draws in air at three points, where there are sensors that take measurements." 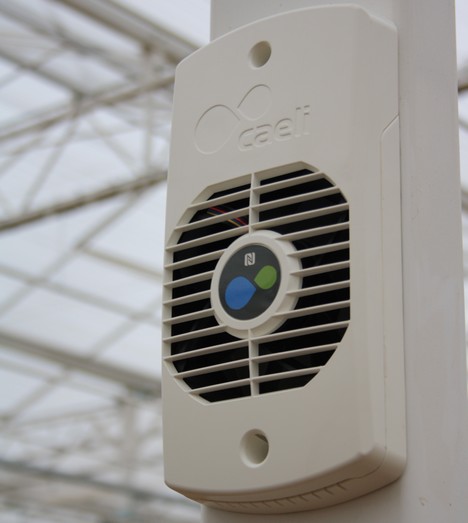 Algorithm
Sven experimented a lot with all the possible positions, after which he wrote his algorithm to control these actions and thus automate the unit. "It is far too complicated for people to set the settings for each greenhouse column themselves", says Sven. Erik adds. "After installing the Caeli unit, each greenhouse column also becomes a measuring point. To make this possible, to make our systems 'smart', we demanded a lot from our R&D and also regularly exchanged ideas with colleagues in the field."

Once the algorithm was in place, it could also be tested. Sven: "One day the algorithm did its job, the next day it only measured. You soon saw that when the algorithm controlled the unit, the temperature differences in the greenhouse were much less." Erik: "Now, in practice, you still come across considerable temperature differences in greenhouses, sometimes up to six to seven degrees Celsius. Even with the latest climate computers that are set very accurately, growers still have spots in the greenhouse where the climate is difficult to control." 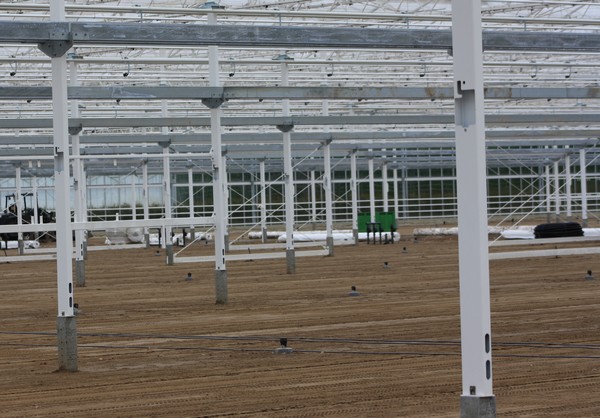 Holes are made in the greenhouse column to integrate the units.

Heatmap
Thanks to the use of Caeli units, the grower has insight into these issues. Sven: "Placing a unit in each greenhouse column creates a very dense sensor network, as it were. This live sensor grid makes us unique. All these measurements produce a heat map, based on the unit itself, thanks to the algorithm, determines how the air movement must be created to obtain a uniform greenhouse climate."

The Caeli unit is equipped with three modes: off, manual and automatic. Sven soon realized that the automatic option is by far the best. "This was evident from the tests we carried out. The algorithm is already super strong. I expect that it will only get better in the future." 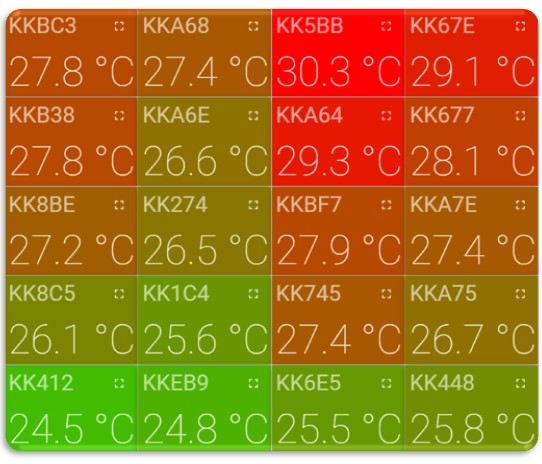 Screen strategy
Sven expects the growers who work with the unit to adapt their screen strategy. "With the heat map, they get a lot of insight into the greenhouse climate, and with the fan units, they have a specific way of making the climate uniform. As a result, I expect growers to start chopping differently, for example." Erik adds: "At the basis of this concept is also the development of Het Nieuwe Telen (in translation: The New Cultivation, a new energy saving way of growing). You can see that for energy-saving reasons, the vents stay closed longer and growers work more with screens. Our unit is then a tool to create air movement."

The team was warned about the dangers of cold spots, as the development process unfolded. With alterations to the screen fabric when installing systems such as fans, that danger is always lurking. " This is not an issue with the Caeli climate solution. There are no limitations to the screen installation," Sven responds. "It is possible to install several zip-in screens without making any adjustments or holes in the screen fabric. Something that benefits the lifespan. Cold spots can also occur in the greenhouse column. The Caeli unit is equipped with a flap to counteract this problem, which is infinitely adjustable, as already mentioned.

Pilot
Van der Avoird Trayplant has installed 308 units in a new greenhouse for strawberry and raspberry seedlings. This is the first large-scale pilot project with the units. The units will be integrated into the columns of the greenhouse. The holes have already been made. Erik: "That is an advantage because it allows you to install the ventilators at the very last moment, which prevents contamination with construction dust."

At the tray plant grower, the units will be placed between the layer with strawberries, where the cuttings hang down, and the layer with raspberries. Between both layers is a distance of three meters. When placed in high wire cultivation, the fan units are located at the height of the top of the plant. "This makes the system different from a semi-closed greenhouse, where the air is blown from slots under the plant," explains Erik. "Moreover, we do not add energy to the air. We don't heat or cool the air and rely solely on air movement." 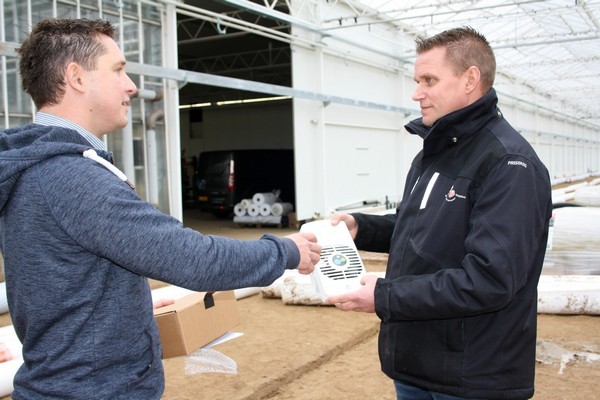 Capacity
Tests already showed that the units have enough capacity. At Caeli, they even think that even less capacity may be needed. Erik: "You use the air movement in a very targeted way from many points. How much capacity you have available does depend on the size of the section, the trellis, and the size of the greenhouse column, among other things." Sven adds. "With a higher capacity demand, it is also possible to monitor the climate differences that arise when a screen door is opened and to alternate with periods in which the fans bring the climate back into balance. That way you keep control of the homogeneity and increase the capacity of the dehumidification using the Caeli unit." 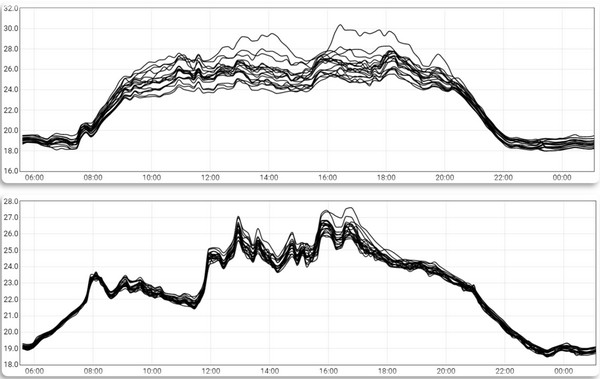 Anyone who also wants to dehumidify needs a connection to the climate computer. All the units can be controlled wirelessly. "This is done from the cloud," Sven explains. "We are still investigating whether local control is also an option. However, I doubt whether that is better."

The idea is that, once the units are installed (insert the plug, put on the cover, and tighten two bolts), the grower does not have to worry about them. Erik: "With this Caeli climate solution, we will soon be offering the grower integrated technology for finely measuring and controlling the greenhouse climate." Sven concludes, "We are certain that with Caeli we have developed something unique for greenhouse farming: a simple yet complex greenhouse climate solution."